Managing a cloud environment takes time, capital, and plenty in the way of domain expertise. This reality is the driving force behind a category of startups developing tools to automate the deployment and orchestration work. Indeed, the managed services market was valued at around $186 billion in 2019, with forecasts suggesting that it could grow to $356.24 billion by 2025.

One contender in the space is Nerdio, which offers a product for managed service providers to build and grow their cloud practices in Microsoft’s Azure. This morning, the Chicago, Illinois-based company announced that it has closed an $8 million series A round led by MK Capital, with participation from Nerdio’s own cofounder and CEO, Vadim Vladimirskiy, and chief revenue officer, Joseph Landes. The infusion brings Nerdio’s total raised to over $10 million, following a $2.4 million round in February 2014. Vladimirskiy says it’ll be used to further develop existing products while expanding operations and supporting partners.

“Public cloud adoption is on the rise. It’s not slowing down anytime soon, and neither are we,” said Vladimirskiy in a statement. “We have evolved alongside the cloud industry — starting out as a [managed service provider], offering a private cloud business, and now being all-in on Azure. Nothing illustrates our commitment to the cloud, Microsoft, and our growing impact on both more than this financial commitment to propel Nerdio’s path forward.”

Nerdio emerged from startup Adar, which Vladimirskiy, Stuart Gabel, and Niall Keegan founded in 2005 to provide online backup systems to small and mid-sized enterprises. Soon after it was founded, Adar transitioned into managing virtual infrastructure, which is how Nerdio and its services came about. 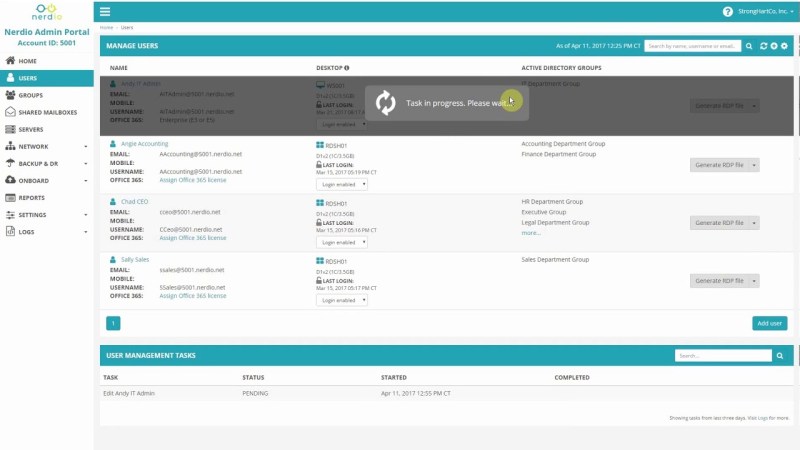 Nerdio’s solutions suite for Azure lets admins automatically provision an IT environment and manage their clients from a single portal. A cost estimator prices out products and services prior to deployment, while an autoscaling algorithm ensures clients only pay for what they use. From an app for iOS and Android, credential users can access customer information and view server logs or perform tasks like editing and removing groups, configuring shared mailboxes, and stopping or starting remote servers. They’re also able to clone existing virtual machines to Azure and inventory environments for migration and automatically invoice customers for both resources used and services rendered.

Nerdio also offers the eponymous Nerdio Private Cloud, a service that delivers IT support and infrastructure, including virtual hardware, software, security backup, and disaster recovery. It creates a virtual server infrastructure in a cloud-hosted environment — access to which is provided through Virtual Desktop Infrastructure (VDI) — and an image to standardize the virtual desktop environment, including all applications needed to access network resources. All of its software is collated and managed by Nerdio and its partners, including patches, upgrades, and compatibility tests.

“We have deep experience in the software and cloud infrastructure sectors and interact with plenty of emerging and innovative startups in ITaaS, IaaS, and DaaS — few of which are as impactful and impressive as Nerdio and their Nerdio for Azure offerings,” said MK Capital’s Bret Maxwell. “Rarely do we have the chance to invest side by side with executive leaders like Vadim and Joseph who believe so strongly in their company’s mission and trajectory, which only strengthens our viewpoint that it is an incredibly exciting time to propel Nerdio’s growth forward.”