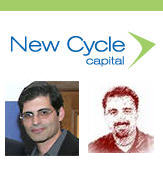 Two Silicon Valley venture capitalists are creating a new venture capital fund that aims to produce competitive profits and also “social benefits.” The fund, to be kicked off next year with at least $50 million, will focus on the “green economy,” as well as financial and other services that help low-income groups.

Called New Cycle Capital, the firm is led by Josh Becker (pictured left) and Benjamin Black (pictured right), both investors who have worked for mainstream venture capital firms. Becker spent time at Redpoint Ventures, while Black worked at Maveron and Rosewood Capital, and was VP of corporate development at Harris Interactive.

Becker has long been socially active in the community, serving on the board of the Full Circle Fund, a San Francisco group of executives that fosters relationships between businesses and non-profits.

Early this year, the two began to raise the fund, after they realized it’s wrong to assume that investments in companies that provide tangible social benefit don’t make as much money as other investments, Becker said. They want to focus on early-stage companies, producing stellar returns in areas such as the ecosystem of services around clean-technology.

They’ve already invested in a few such companies. One is Sneaker Villa, a retailer with $20 million in revenue that operates in inner-cities and seeks to create $100 million in stock option wealth for employees working in America’s poorest communities. They hope it will go public. A couple of others, including an energy efficiency company called Positive Energy, are still secret.

The two are trying to create an ecosystem of top-skilled entrepreneurs and executives who are ready to join up. To this end, they also organized a conference, held yesterday in San Francisco, called” Zero Tradeoff.” The gathering discussed how foundations can invest with the same approach. Private foundations — which have $500 billion in investable assets — should devote more of their money to causes that create socially beneficial areas like renewable energy and lower income communities, but which also produce strong returns, Becker said.

Major foundations participated yesterday, including The Annie E. Casey Foundation, which declared that three percent of its assets, or $100 million would be devoted to such causes. It said wants to do more in coming years. Casey’s representative, Christa Velasquez, laid down a challenge that the greater foundation community generate $10 billion for such causes. Another company presenting at the conference, Progress Financial, helped showcase the cause. It generates loans to low income communities, but is backed by hard-nosed Silicon Valley venture capitalists Charles River Ventures and Greylocks that want to make serious money. That wouldn’t have happened a few years ago, said Becker.

The majority of foundations don’t follow this thinking. The Gates Foundation, for example, invests in for-profit causes, and then gives away five percent of its profits to philanthropy efforts it thinks will have the biggest impact.

To be sure, Google’s foundation, Google.org, does use this philosophy for choosing its investments, and we’ve written about Google’s initiatives in this area, for example its decision to invest hundreds of millions to create clean electricity. However, Google is an outlier, said Becker. “This is the leading edge,” said Becker, of the new way of thinking. “These guys [Casey and others] are dipping their toes into the water. We want to turn that into a Tsunami.”