Nuro, a self-driving car company founded by two former Google employees, today announced that it’s expanding its driverless delivery partnership with grocery giant Kroger to a new market: Houston. This follows pilots in Scottsdale, Arizona that kicked off in August, first with a fleet of modified Toyota Priuses and then with Nuro’s custom vehicle, R1.

In Houston, Nuro will service four zip codes — 77401, 77096, 77005, and 77025 — near two Kroger locations, one on 10306 South Post Oak Road and other off of 5150 Buffalo Speedway. Customers within range will be able to place autonomous same-day or next-day delivery orders via Kroger’s website or app seven days a week (based on slot availability) later this spring, for a flat price of $5.95.

Once an order is placed, store employees will load the groceries into one of several compartments in Nuro’s thin, stout R1, which packs a proprietary mix of laser sensors, cameras, and computers. The vehicles top out at a speed of 25 miles per hour and are fully driverless, although for now escorted by human-driven cars.

After a Nuro car arrives, customers will verify their identity with a password or form of biometric authentication and retrieve their goods. Nuro says it has successfully completed “thousands” of these deliveries to customers in Scottsdale.

“We’ve seen first-hand in Arizona how enthusiastic customers are about getting their Kroger groceries delivered by a Nuro self-driving vehicle,” said Nuro cofounder Dave Ferguson. “Texas has been a leader in encouraging self-driving innovation, and we’re excited to help deliver that future for Houston — a dynamic, diverse, and welcoming metropolitan city that we’re excited to soon explore and serve with this autonomous delivery service.” 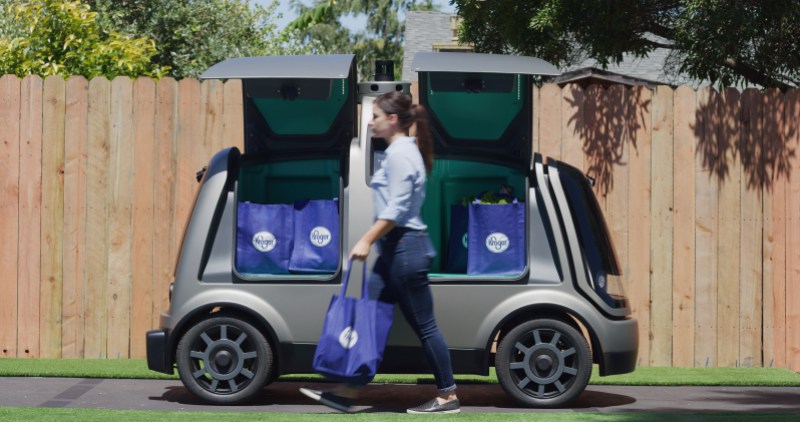 The endgame is to roll autonomous delivery out to Kroger customers across the U.S., but that won’t happen right away — in states where unsupervised self-driving cars haven’t been legalized, Nuro will have to seek the approval of the National Highway Traffic Safety Administration.

Still, that leaves quite a few locations on the table.

Kroger is the largest supermarket chain in the country, with more than 2,800 stores in 35 states that serve around 9 million customers a day. It already offers same-day delivery to 75 percent of its customers, and the idea is to deploy Nuro’s cars in regions that don’t yet have that service.

“Our Arizona pilot program confirmed the flexibility and benefits provided by autonomous vehicles and how much customers are open to more innovative solutions,” said Kroger chief digital officer Yael Cosset. “It’s always been our shared vision to scale this initiative to new markets, using world-changing technology to enable a new type of delivery service for our customers. We operate 102 stores in Houston — an energetic market that embraces digital and technology advancement. The launch is one more way we are committed to sustainably provide our customers with anything, anytime, and anywhere, the way they want it.”

Nuro was cofounded in 2016 by Ferguson and Jiajun Zhu, both veterans of the secretive Google self-driving car project that eventually spun out as Waymo. The Mountain View, California-based company has about 200 employees and 100 contract workers and has so far deployed six delivery vehicles. It plans to test 50 vehicles on roads in California, Arizona, and Texas, with safety drivers behind the wheel.