Self-driving delivery startup Nuro today announced a partnership to ferry prescriptions and other essentials to customers. The pilot, which will be limited to the Greater Houston area when it begins in June, will serve people across three zip codes near the CVS location at Bissonnet St. in Bellaire, according to Nuro.

CVS.com and CVS mobile app users within driving distance will get an option for autonomous delivery at checkout time, free of charge. Nuro says that to ensure the security of orders, shoppers will need to confirm their identity when Nuro’s vehicles arrive at their home.

Stateside autonomous delivery launches have picked up during the pandemic, with companies like Cruise, Pony.ai, Starship Technologies, and the Hyundai-Aptiv Autonomous Driving Joint Venture deploying vehicles to deliver goods to frontline workers, ecommerce shoppers, and those in need. In April, the Mayo Clinic branch in Florida began using Navya shuttles to transport COVID-19 tests from a testing site to a processing laboratory on the hospital’s campus. Elsewhere, KiwiBot’s autonomous robots are furnishing residents of Berkeley, Denver, and other large metropolitan areas with masks, sanitary supplies, antibacterial gels, and hygiene products.

While some of the self-driving cars, rovers, and vans are monitored by safety drivers behind the wheel, they may still pose less risk of spreading infection than conventional delivery vehicles. That’s because in many cases, the deliveries are contactless — customers themselves retrieve orders from the vehicles. The vehicles are also regularly sanitized. Postmates, whose delivery robot Serve is currently serving thousands of customers in downtown Los Angeles, West Hollywood, and San Francisco, is wiped down throughout the day with disinfectant, the company previously told VentureBeat. 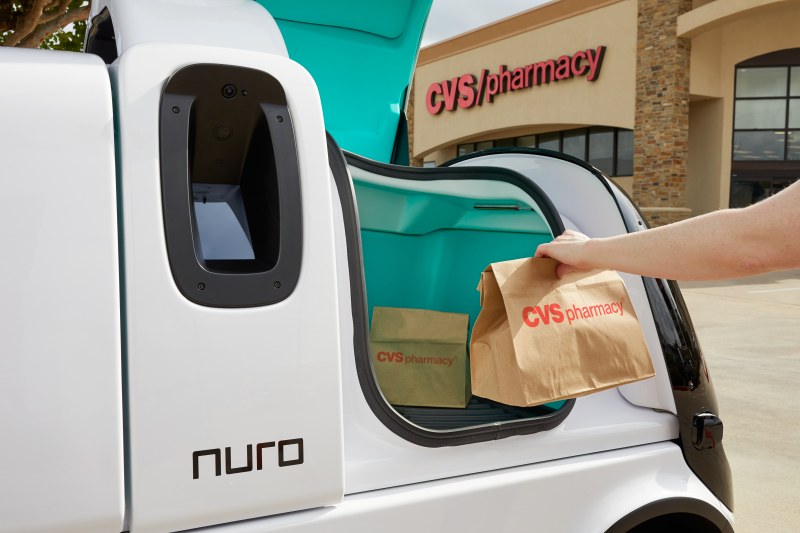 Nuro’s pilot with CVS won’t involve its recently unveiled R2 vehicle, which earlier this year received approval from the U.S. National Highway Traffic Safety Administration (NHTSA) to drive at speeds upwards of 25 miles per hour without equipment required for passenger vehicles. Instead, Nuro will initially use Toyota Priuses retrofitted with a computer and sensors — including radar, cameras, and lidar — that will be replaced by a small R2 fleet at some point in the future.

The CVS partnership comes after Nuro obtained a permit from the California Department of Motor Vehicles (DMV) allowing it to test driverless delivery vehicles on public roads within a portion of the San Francisco Bay Area. While the company already has California state authority to test autonomous vehicles on the road with safety drivers, this new permit from the DMV allows the startup to test two light-duty delivery vehicles without drivers behind the wheel in nine cities in Santa Clara and San Mateo counties.

Nuro was cofounded in 2016 by Dave Ferguson and Jiajun Zhu, both veterans of the secretive Google self-driving car project that eventually spun out as Waymo. Mountain View, California-based Nuro has about 400 employees and 100 contract workers and has so far deployed over 75 delivery vehicles — a mix of self-driving Priuses and R2s.

For the better part of a year, Nuro’s fleet of Prius vehicles in Houston has been making deliveries to consumers from various partners, including Kroger. In June 2019, the company signed a deal with Domino’s to bring autonomous pizza delivery to parts of the city. And last month, Nuro began using a small number of R2 vehicles to transport medical supplies around the Event Center in San Mateo and the Sleep Train Arena for people stricken with COVID-19.

In April, CVS teamed up with UPS’ Flight Forward division to launch a residential drone delivery service in a Florida retirement community. UPS and CVS last year announced plans to explore the use of drone delivery, and in November 2019 they completed their first deliveries of prescriptions from a pharmacy in Cary, North Carolina.