Nvidia CEO Jensen Huang was back at CES 2018 with his signature black leather jacket. He unveiled the company’s announcements at a press event on Sunday at the big tech trade show in Las Vegas. They included the 9-billion transistor Xavier artificial intelligence chip, the beta launch of GeForce Now cloud gaming on Windows, and support for large format displays known as BGFD.

Then he returned for a Q&A with the press on Thursday, where he went into an unscripted monologue on what the company is doing in both artificial intelligence and gaming. When he finally stopped talking, the press got a chance to ask him some questions.

Here’s an edited transcript of our interview. I’ve also included three videos of the entire talk, if you prefer to watch it on video. 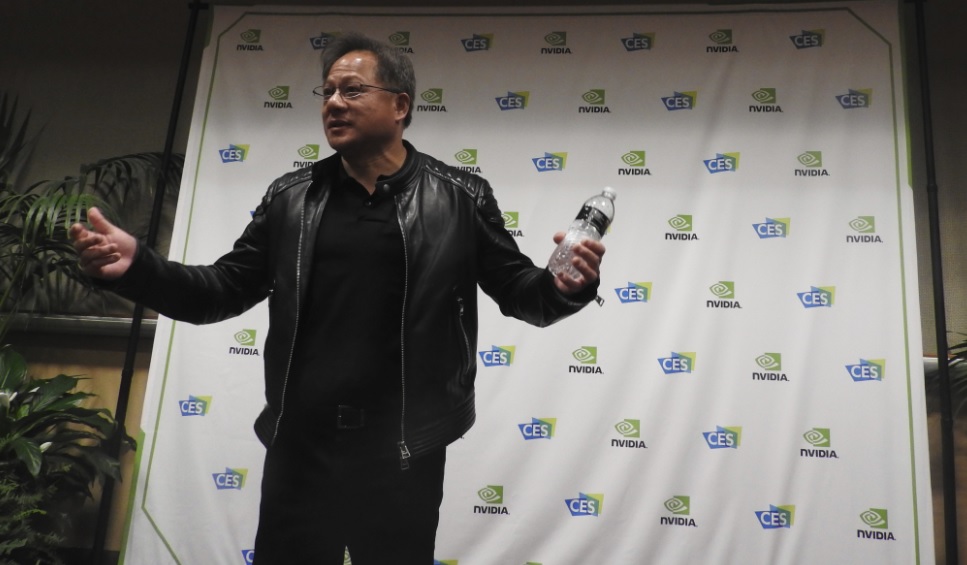 Above: Jensen Huang started out talking about gaming advances like the BFGD.

Here at CES we announced several things this week. I had a keynote. It was so packed with stuff that we couldn’t even include all our important gaming news. I’m going to start with gaming first. As you know, GeForce is the world’s largest game platform. It has 200 million active users, active gamers. It’s the number one gaming platform in a lot of different countries, from China to Russia to southeast Asia. It’s because GeForce, as you know, works incredibly well. Every game works great on it. The PC is an open, evolving, vibrant platform. It just gets better every day. It doesn’t get better every five years. It gets better every single day.

When technology is moving the way it is, it stands to reason that a platform that can evolve every day, over the course of time, would have a dramatic lead over other platforms. Anything that has to take a giant step every five years. That’s why GeForce today gives you the best possible gaming experience, if that’s what you like.

It’s also an open platform for different styles of play. A PC can support every single input and output peripheral. It doesn’t matter what it is. Whether it’s a game pad or a keyboard or a mouse or whatever it is, it’s able. It has such rich I/O. Because of where it sits, on your desk, you can enjoy it in any possible way.

As a result of all those different types of I/O and different ways to engage the computer, there are lots of styles of play. You can use it for first-person shooters, for esports, for social gaming. You can share your winning moments, create art, broadcast. The number of different ways you can enjoy games on a PC, the styles of games and how you can enjoy them, continues to evolve.

Now we know that gaming is not only a great game, but a great sport. It’s the largest sport, because it can be any sport. It can be a football game one day and a survivor game another day. PUBG, the latest game this last year, an incredible concept. When you see a great idea, you see it and you think, “Why didn’t I think of that?” It’s so obvious. PUBG is one of those great game ideas.

Not only would it be a great game to play, it’s also – just like Survivor or the Hunger Games – it’s a great game to watch. The number of people watching PUBG is obviously very high. All of a sudden a brand new genre came into gaming, and it did that on PC.

We announced several things. 10 new desktop PCs were created, of all different sizes and shapes, based around GeForce. Three new Max Q notebooks. We took energy efficiency and performance engineering to the extreme with Max Q. From architecture to chip design to system design, voltage, power regulation design, thermal design, software design, we took something that was already energy efficient and squeezed it into a thin notebook. Max Q notebooks are thrilling to look at. Imagine a computer that’s four times the performance of a Macbook Pro, almost twice the performance of the highest-end game console. It fits on your hand like this, in a 20mm notebook that weighs only five pounds. It’s crazy. We took our engineering skills to the limit and we delivered Max Q.

Then we said, “What else can we do to expand the reach of gaming and take the experience to a new level?” We always thought it would be great if we could take PC gaming, which is already amazing, and put it on the one display that we always wished it would be on: the largest display in your house. What would you call the largest display in your house? It’s the BFG display. So we called it BFGD, Big Format Gaming Display. [laughs] That’s what it stands for. It never gets old.