White House chief technology officer Todd Park is under intense pressure to improve HealthCare.gov, the Affordable Care Act sign-up website that has been plagued with bugs and errors since it launched on Oct. 1.

Park hasn’t talked to the press about the HealthCare.gov site, and he asked if he could testify in front of congress in just over two weeks so he can focus on fixing the site. However, Park received a subpoena from House Oversight Chairman Darrell Issa (R-Calif.) on Friday to appear in front of a highly charged bipartisan panel this afternoon.

Here are some of the more useful points that the committee gleaned during the hearing:

The Internet responded to the Obamacare hearing, which is currently being livestreamed, with the hashtag #LetToddWork. Clay Johnson, the author of the Information Diet who recently wrote an op-ed in the New York Times on the HealthCare.gov debacle, hacked up a website to ask that the subpoena be revoked. CraigsList founder Craig Newmark; Farzad Mostashari, the former chief of Office of National Coordinator of Health Information Technology, and other famous folk issued their support for Park. 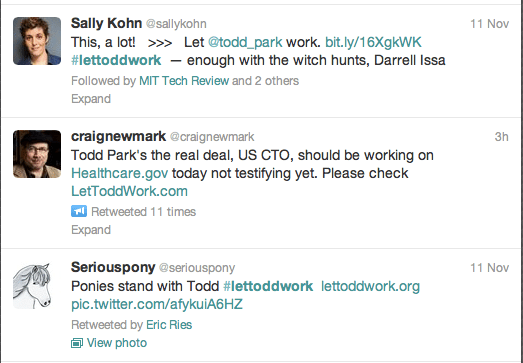 “No matter what side of the aisle you sit on, Todd is one of the good guys. Let him do his job,” Johnson wrote.

Johnson doesn’t just have support from Internet entrepreneurs and social media aficionados. Committee member Cynthia Loomis (R-Wyo.) quipped this afternoon, “We shouldn’t be pulling a surgeon from the operating room today,” meaning that Park’s energies should be fully focused on the website — not responding to attacks from Republicans.

Watching the hearing unfold, it was hard not to feel sympathetic for Park, who received quite the grilling, even from members of his own party. Stephen Lynch (D-Mass.) did make the conciliatory point that his state’s exchange, aka “RomneyCare,” had also been implemented slowly at first during the past decade. However, the congressman critiqued the government’s technology team for failing to cater to the elderly and the poor in his district, and he expressed fears that employers will simply “unplug,” meaning that they will send employees to the buggy exchanges.

Republicans were far more critical of Park and frequently cut him off mid-sentence. We even heard talk of an internal “Republican playbook” that has been making the rounds to capitalize on the Obamacare woes.

The awkwardness was briefly tempered with a few jokes from Issa and a few of the other committee members. One particularly testy exchange between Park and Rep. Thomas Massie (R-Ky.) was put down to an old college rivalry. Park attended Harvard; Massie is an MIT grad.

At one point, Park was referred to as the “smartest guy in the room.” When he demurred, Rep. Trey Gowdy (R-S.C.) hit back that it’s “true,” as he’s been in the room a while.

Park was dismissed earlier than some of the other government technologists in the room, including Henry Chao, a Centers for Medicare and Medicaid official who famously described himself as “nervous” prior to the launch of the federal exchange.

Before leaving to get back to work, Park stressed the need for federal procurement reform, given that government agencies spend an estimated billions of dollars annually on IT projects that do not run efficiently. Park came across humble and polite (while Chao seemed a bit grumpy), but he was reluctant to answer some direct questions.

For some useful analysis and live tweets from the hearing, we recommend following Tow Center for Digital Journalism fellow Alex Howard (@digiphile) and Johnson (@cjoh).