Optimus Ride, a startup developing self-driving shuttles principally for transportation, today announced that three of its vehicles will begin making deliveries at the Yards, a waterfront development in Washington, D.C., beginning this week. From D.C.-area restaurant and brewery Bluejacket, they’ll ferry boxes containing a week’s worth of food and ingredients furnished by the Neighborhood Restaurant Group and the Arcadia Center for Sustainable Food and Agriculture to families in need. Recipients are identified by Pathways to Housing, a nonprofit organization dedicated to ending homelessness.

The meal kits, which will also be delivered to the nearby Van Ness Elementary School, will contain a mix of products requiring prep (such as proteins, fresh produce, and grains) and those that are ready to eat (like chicken soup). The company’s driverless fleet will distribute them to the families on a weekly basis, serving a total of 5,000 meals.

Autonomous vehicle companies such as Cruise, Pony.ai, Hyundai-Aptiv Autonomous Driving Joint Venture, and Nuro have deployed small fleets to transport prescriptions, food, and other essentials to those in need during the pandemic. Self-driving cars and robots still require disinfection, but they could minimize the risk of spreading the coronavirus in some cases.

Optimus Ride says prior to the pandemic it designed, built, and began the operation of a self-driving system at the Yards that was supervised by on-site and remote staff. The company eventually plans to expand beyond meal box delivery to commercial services for residents, including transportation and restaurant, retail, and business delivery.

“Our strategy has proven to be highly tractable,” wrote Optimus Ride CEO Ryan Chin in a recent blog post. “Optimus is on the verge of achieving this, given our world-class engineering team and our geofenced strategy model, which allows us to more safely and in a timely manner move to a fully driverless system operation with remote monitoring.”

Chin, who formerly led the City Science Initiative at the MIT Media Lab, says Optimus Ride’s cars will someday be capable of level 4 autonomous driving, meaning they’ll operate with limited human input and oversight in specific conditions and locations (as defined by the Society of Automotive Engineers). They tap Nvidia’s Drive AGX Xavier platform, which Nvidia — an Optimus Ride investor — claims is capable of delivering 30 trillion operations per second.

Optimus Ride has flown largely under the radar since October 2017, when its partnership with real estate developer LStar Ventures brought its self-driving car service to the 1,550-acre Union Point neighborhood in Weymouth, south of Boston. It’s an MIT spinout founded by a team of DARPA Urban Challenge competitors and became one of the first to secure a driverless vehicle permit from the Massachusetts Department of Transportation roughly four years ago, with tests of its 25-plus car fleet starting in Raymond L. Flynn Marine Park in Boston’s Seaport District. 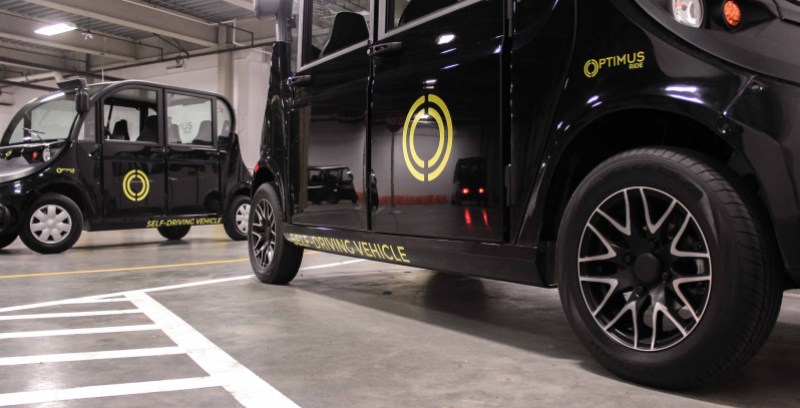 Optimus Ride piloted its suite of vehicle mapping, control, and orchestration software on the campus of the Perkins School for the Blind in Watertown, Massachusetts in late 2016. More recently, ​it kicked off a deployment within Paradise Valley Estates​ — a private 80-acre assisted living community located in Fairfield, California — and adapted the program to deliver 50-80 meals a day to residents during the pandemic.

Optimus Ride operates much like May Mobility, a startup that develops an autonomous vehicle stack and works with manufacturers to install it in low-speed, compact fleets. It’s also similar to French company Navya, which has sold 67 driverless shuttles in 16 countries. Like May and Navya, Optimus Ride says it can integrate its white-label autonomous system into “any vehicle type” — for now, lightweight cars that fit a handful of passengers — and it sees cities, public transit systems, and ride-sharing services as potential customers.

Optimus Ride’s operation at the Yards is its second collaboration with developer Brookfield Properties in the greater Washington, D.C. area. Last year, the car company deployed a self-driving fleet at Halley Rise, Brookfield Properties’ 3.5 million square foot mixed-use development in Reston, Virginia. The fleet has given over 41,000 rides, to date. The Halley Rise deployment followed the launch of Optimus Ride’s self-driving shuttle and food delivery service at the Brooklyn Navy Yard, a 300-acre shipyard and industrial complex located in Northwestern Brooklyn.