Calling itself one of the last independent AI-powered assistants, the Ozlo personal assistant was made publicly available for the first time today on iOS and the web.

Ozlo will expand to become a voice-enabled Amazon Alexa skill, and it will soon be available on bot platforms like Facebook Messenger as well, CEO Charles Jolley told VentureBeat in a phone interview.

An Ozlo private beta started in May with a focus on finding people restaurants, bars, and recipes. The bot now draws on intelligence from sources like TripAdvisor, Yelp, DoorDash, and food and dietary specialists, and can tell you about news, weather, businesses, and PokéStops.

Prior to the release of the new chat app Allo three weeks ago, Google acquired API.ai, a bot creation platform whose intelligent assistant dates back to 2011.

With Allo came Google Assistant. Last week with the arrival of lots of new Google hardware, Google Assistant took center stage, and CEO Sundar Pichai made his case for why it should be your guide in the age of artificial intelligence.

A day later, Samsung announced that it acquired the highly anticipated intelligent assistant Viv, made by the creators of Siri.

In the midst of these high-profile acquisitions, Ozlo is making its independence part of its business strategy.

“There’s been a lot of consolidation and changes happening with Allo and these companies being bought so the industry is really shaping up now,” Jolley said. “I think we’d like to be independent. I think there’s a big opportunity here for an independent company to give people the best answer.” 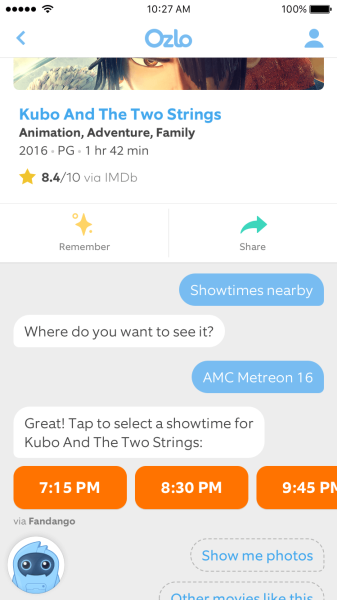 Next year, Ozlo will be made available to third-party developers for them to create their own versions of Ozlo. The company believes that the best way to build its assistant and find answers to questions is through the integration of services from developers and diverse datasets.

In a guest article published last month by VentureBeat, Jolley laid out why he thinks neutrality and independence are critical to intelligent assistants in the future: because assistants owned by tech giants can demonstrate significant bias.

“When I ask my assistant a question or give it a task, I want to know it’s going to give me the best answer it possibly can, no matter where it comes from. I don’t want it to be biased towards some other corporate goal,” Jolley wrote in the article.

Like driverless cars, assistants being made now will grow exponentially smarter and be a bigger part of our lives, and people have to start thinking about how they’re made now.

“It’s early, but by the time this thing actually works and is in a lot of people’s hands, it’s going to be too late. So now is the time to think about how do we get the best answer all the time,” Jolley told VentureBeat.

As recently as August, Ozlo was referred to by Fast Company as a specialist, but Jolley said the goal is to open its platform in 2017 so Ozlo can be trained for virtually any specialty.

“Right now we’re focusing on common things like eating out and meeting up with friends, but the idea is to actually open Ozlo up to any dataset sometime next year, so we’re actually going to let developers come in and add in whatever services they want on any topic they want and Ozlo is going to learn from it,” he said.

Jolley was head of platform at Facebook from 2011 to 2013. Shortly after leaving Facebook, Jolley was introduced to Mike Hanson by John Lilly of Greylock Partners. In 2014, Hanson and Jolley created Ozlo with the hope of someday replacing the need for search engines or apps.

Ozlo has offices in Seattle and Palo Alto and currently has 30 employees.

In a second round of funding this spring, Ozlo raised $14 million from investors like Greylock Partners and Yahoo cofounder Jerry Yang of AME Cloud Ventures.