In the future, when a construction worker or hotel maid says “Help!” or “Emergency!” on a radio or chat group, it may automatically summon help from colleagues or send an alert to appropriate company personnel.

That’s the idea behind Panic Bot, the product of Orion Labs, a company created by two former first responders. The platform combines team communication with bots for automated workflows and access to backend systems like Oracle, SAP, Shopify, and PagerDuty.

Panic Bot was made especially for first responders, miners, hotel maids, and others whose work environment sometimes calls for them to be independent or isolated from coworkers.

“I think the most exciting part of what’s happening right now really is that this technology is starting to benefit industries, verticals, and people doing real work in the world in a way that doesn’t happen if you’re supposed to be sitting at home all day behind a $3,000 MacBook,” founder Jesse Robbins told VentureBeat in a phone interview. “These are for people working real jobs in the field and doing hard stuff and needing to be connected, so I’m pretty pumped because I really believe in startups as a means of changing people’s lives, hopefully for the better.”

The implementation of services like Panic Bot will become more common, Robbins believes, as more governments make such services a legal requirement. In recent weeks, lawmakers in Seattle and Sacramento have required hotels to give their maids a panic button or means of communication to keep them safe.

Orion bots aren’t just made for emergencies. Different wake words can be programmed to trigger different workflows and automated activity. Panic Bot made its debut last month along with a bot for retailers to check their inventory.

“You might say ‘Cleanup, aisle two’ or ‘Tell my buddies I’m stuck in a meeting I don’t want to be in’ or pretty much whatever you want to do,” Robbins said.

Robbins concedes that in some moments, its emergency bot may not be able to send someone to the rescue.

“In the worst case scenario, where there’s simply no cell phone network, period, then there’s no network to connect to. And in those situations, those services won’t work until it can see a network again,” he said.

Last month, Orion Labs launched App Talk, an iOS app for teams and bots to work together via voice and text communications. 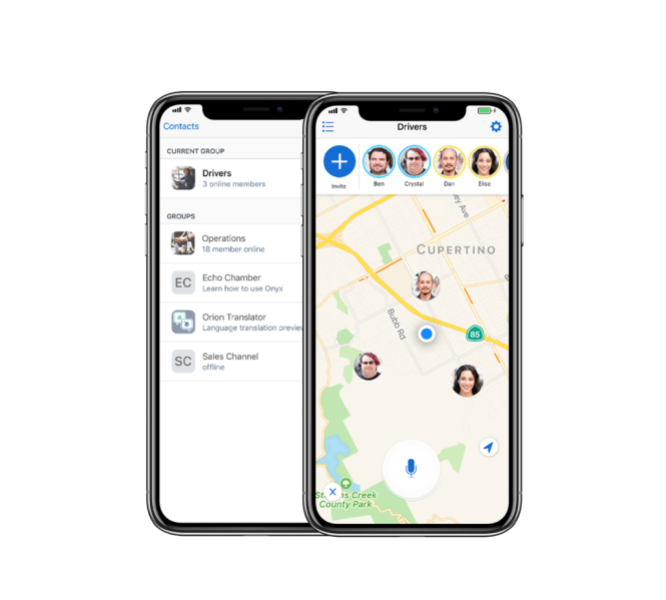 Bots for emergency dispatch systems may become part of Orion’s future roadmap, and once 5G becomes available, Orion wants to use it to directly connect teams, Robbins said.

Organizations that need to assure their employees have 100 percent access to emergency workflow bots may soon be able to add bots to communication over traditional walkie talkies. To create bots able to recognize wake words to automate workflows in the less-than-ideal conditions first responders have to operate in with walkie talkies, Orion Labs is exploring partnerships to improve voice recognition.

“We’ve had it in testing for two years; it’s not publicly released, yet it’s a thing we’re evaluating. The challenge is the audio quality from any one of these radios is so low that voice recognition is not very accurate, and it’s really hard to get it there,” Robbins said.

Beyond a single chat app and its Onyx walkie talkie-like wearable, Orion Labs is trying to string together a collection of ways people can communicate with their team and bots. In September 2017, Orion Labs announced the closure of a $18.25 million funding round and released bots that perform real-time translation of Spanish and Chinese.

Orion Labs is one in a clutch of companies, including Zoom.ai, Talla, and Volara, that offer automated workflows for the workplace.