Google debuted the Pixel 3 and Pixel 3 XL with dual front-facing cameras and glass body last week, and while there are notable hardware improvements, it’s things like being able to screen calls with your own conversational AI or make reservations with Duplex that make the latest Pixel stand out.

Many of the Pixel 3 and Pixel 3 XL’s best features, whether it’s a predictive battery or a camera with Portrait Mode that scans business cards and helps you choose your best pictures, are made better with AI. Pixel 3 phones start shipping Thursday.

The Pixel 3 and Pixel 3 XL are the first in Google’s Pixel series to ditch aluminum for glass, which enables support for wireless charging — also a first. It’s a bit deceptive; the bottom portion of the rear cover has a matte coating, giving them the two-tone aesthetic characteristic of their predecessors. It feels a bit like ceramic, and testing saw it resist fingerprints and pocket lint in equal parts — a welcome change from the glossy finishes on flagships like the LG V40 and Vivo Nex S. And in the Pixel 3 XL’s case, it contributes to a slightly heavier profile (the Pixel 3 XL weighs in at 6.49 ounces versus the Pixel 2 XL’s 6.17 ounces).

The glass — Corning’s Gorilla Glass 5 — extends to all four corners and edges of the Pixel 3 and Pixel 3 XL’s rears, encircling the matte portion and curving slightly toward the aluminum frame. Said frame continues the curve, which the protective glass atop the screen completes. It’s not quite seamless — there’s noticeable separation between the frame and glass — but it’s impressively ergonomic. The Pixel 3 XL is just wide enough to grasp firmly in-palm, with a few fingers wrapped around the far edge for peace of mind.

Google stuck with a single rear camera this go around, opting for a 12.2-megapixel sensor with 1.4μm pixels, an f/1.8 aperture, autofocus with dual phase detection, a spectral sensor (to aid in color accuracy) and flicker sensor (to reduce banding in low light), and optical image stabilization. It’s paired with a flash and positioned above and to the left of the Pixel Imprint fingerprint sensor, which Google says becomes more accurate over time as it reads your finger.

The front of the Pixel 3 and Pixel 3 XL bears two cameras instead of the traditional one — both 8MP models, but with different apertures (f/1.8 and f/2.2) and lenses (standard and wide-angle). They’re joined by an earpiece that doubles as a loudspeaker; in conjunction with a second front-firing speaker, it produces stereo sound that’s 40 percent louder than the Pixel 2 and Pixel 2 XL’s two-speaker system. (Worth noting is that the Pixel 3 XL’s top speaker, between the front cameras, is slightly smaller than the bottom speaker, resulting in a slight imbalance between the two.)

Notch or no, the screen’s dynamic range is industry-leading; it’s among the best I’ve seen, and analysts at DisplayMate agree. The firm awarded the Pixel 3 and Pixel 3 XL its Best Smartphone Display Award in part for “color accuracy that is virtually indistinguishable from perfect.” Impressive viewing angles and an array of calibration options — including three color profiles (Natural, Boosted, and Adaptive) and adaptive brightness, which taps AI to automatically adjust to environments and activities — are icing on top of an already delicious cake.

The Pixel 3 might not be for everyone. Compared to LG V40 and the Sony Xperia XZ3, the Pixel 3 and Pixel 3 XL are much more neutral (and even muted) and in appearance on the default profile. The boosted profile saturates colors a bit — particularly on the warmer end of the spectrum — but it doesn’t achieve the vibrancy of phones like the Galaxy Note 9. 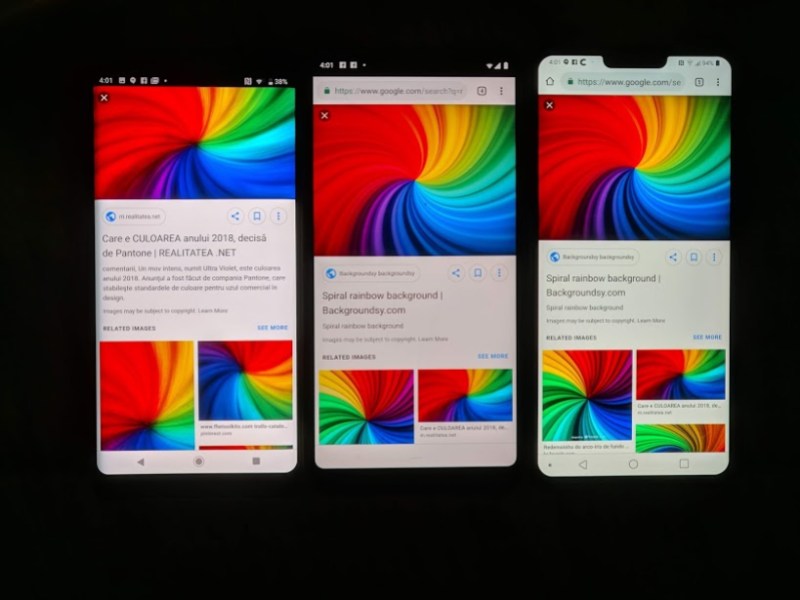 Above: From left to right: Sony Xperia XZ3, Pixel 3 XL, and LG V40, all on default settings.

As was pointed out in a specs breakdown by VentureBeat last week, the Pixel 3 and Pixel 3 XL have many similar specs to their predecessors, but they’re a bit more expensive, a bit heavier, and see a screen size increase of 5 to 5.5 from Pixel 2 to Pixel 3 and 6.0 to 6.3 from Pixel 2 XL to Pixel 3 XL.

You also get an IP68 water and dust resistant rating that have been available in other Android flagship phones for years and a 40 percent improvement in volume output from dual stereo speakers, something that makes coherent communication with Google Assistant in Pixel Stand a viable option.

If you’re super into Pixel phones and have been following news since their debut last week, there may not be much to say about the Pixel 3 camera that you haven’t already heard by now.

A year ago VentureBeat said the Pixel 2 had the “sexiest camera on the planet,” and not much has changed.

Portrait mode, first introduced for Pixel 2, is back in the Pixel 3, and I’m glad there’s a readily available option right next to camera and video options in the camera app. The Pixel 2 required a swipe or opening a drop-down menu to take a portrait photo. 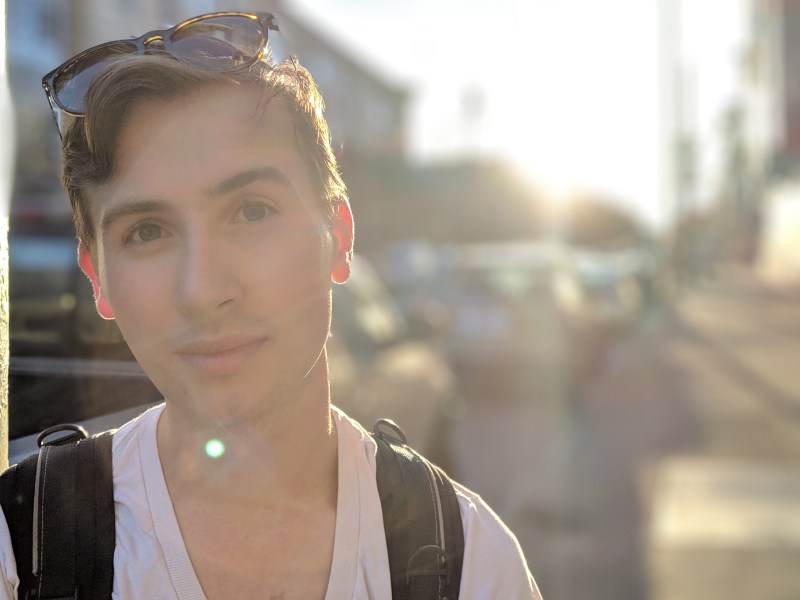 Portrait mode is a neural net-driven camera effect that blurs the background in photos even though cameras on both sides of the Pixel and other smartphones have a low aperture.

Without question, an improvement for Portrait photos is the ability to choose the intensity of the blur placed on the background, because control of depth of field makes for better photography.

It’s not new to the Pixel 3, but one great thing about taking photos with a Pixel is that a double tap of the power button can wake the camera. All the tech in the world can’t help you if you can’t get your camera out and pointed at your subject.

When the double tap is paired with Top Shot, a new feature that helps you select your best photo that does not have blur or closed eyes or things of that nature, you can do even more to make sure you never miss a shot. 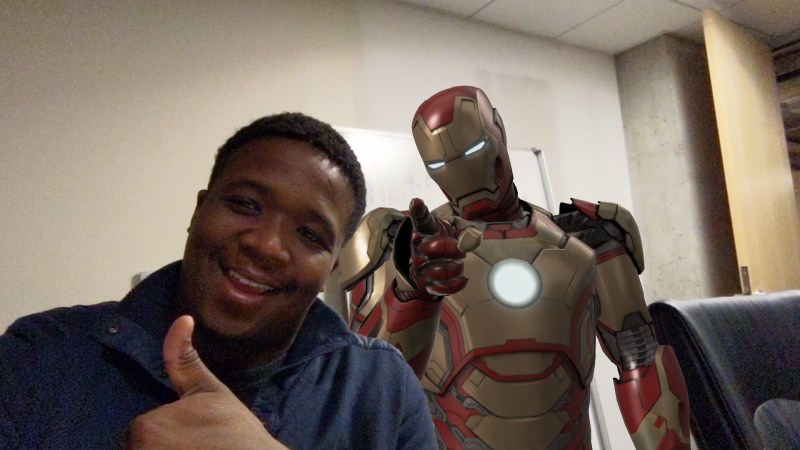 Formerly named AR Stickers, Playground has also been added to the Pixel 3 camera for fun with augmented reality characters. In the latest version you can take selfies with characters like Iron Man.

Photobooth mode is another new addition to the camera. It’s fun, but it seems to take photos based on the intensity of expressive faces you can make, so be ready to show some emotion.

Another great Pixel 3 gesture is that a long touch of the screen when using the camera app brings Google Lens to life for real-time computer vision smarts. Other Android phone manufacturers like LG and Sony also plan to bring Lens directly into the camera.

Lens can do a wide variety of things from pulling text from a document or image, finding new products in similar styles, or scanning QR codes.

Google has spread Lens to the Google Photos app, and it can be found in the bottom right corner of the screen after summoning Google Assistant.

During this review, Lens appeared to do best at text identification for things like scanning business cards or pulling a URL from an image, but it was not as helpful in recognizing plants or animals.

Strangely enough, Lens does not work when you double tap the power button for quick access to the camera, an inconsistency with plans to make Google Assistant available without unlocking the phone with fingerprint scanner or entering a 4-digit PIN code.

Some new camera features, such as Night Sight for low-light photography lauded at the debut last week, were not available at the time of this review, but based on a few days with the device, the Pixel 3 still has one of the most impressive cameras available in any smartphone.

The $80 Pixel Stand is more than just a charging pad. Under the hood, it packs a microprocessor that communicates with the Pixel 3 wirelessly, allowing you to customize the settings of each Stand individually. And that’s just the tip of the iceberg.

When docked in a Pixel Stand, the Pixel 3 transforms into something of a smart display. A streamlined dashboard provides shortcuts to the Google Assistant, displays the date and time, and shows incoming notifications truncated to an icon. Google Photos powers Photo Frame, a feature that taps AI to pick out the “best” pictures in a given gallery — i.e., pics that aren’t blurry or out of focus — and display them on the Pixel. Another spotlight feature: Sunrise Alarm, which illuminates the Pixel 3’s screen bright red 15 minutes before a morning alarm is scheduled to go off. 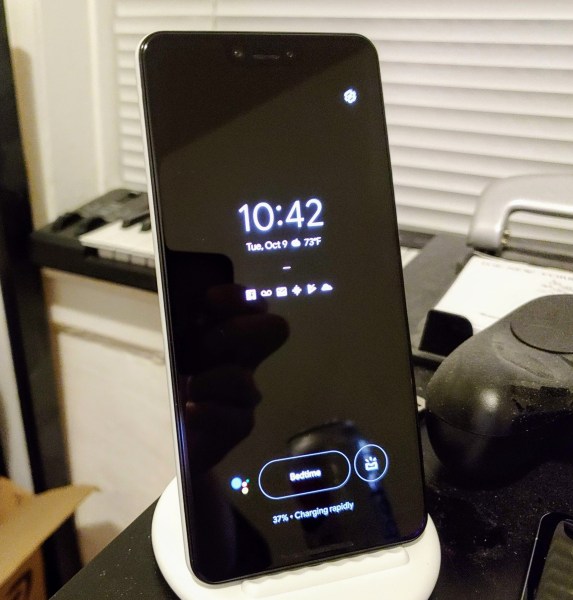 Last but not least, Pixel Stand plays nicely with Google’s wider hardware ecosystem. For one, it integrates with Nest Doorbell video alarms, giving you one-tap access to a livestream of your front door. And it provides a convenient way to trigger the Google Assistants’ Routines feature, which lets you string together connected light bulbs, deadbolts, and appliances.

Google Assistant in the Pixel Stand can function like a smart display, but unlike Lenovo’s Smart Display, which can follow up queries with 3-5 potential responses, the Pixel Stand makes one guess at a limited group of choices like “Play News” or “What’s the weather?”

Call Screen is conversational AI similar to Duplex that can ask a person why they’re calling before you decide to answer the phone. Duplex for Pixel smartphones is also coming to select cities next month.

Here’s how it works: When someone gives you a ring, you’ll see an option to screen the call. Tap it, and you’ll be thrown into a Google Assistant screen with a real-time transcription of an exchange between the Google Assistant and the initiating caller.

It’s not quite like Google Duplex — there’s a couple of predefined Google Assistant responses to choose from, including two that end in a hangup. (It’s a bit like playing prerecorded soundboard snippets over the phone.) And from the caller’s perspective, it’s akin to an automated support line.

As technically limited as it is, though, Call Screen may be the most useful feature on the Pixel 3 and 3 XL. Unsolicited calls are a fact of life (especially for a reporter), and letting them roll over to voicemail isn’t a great solution. With Call Screen, the user gets a handy preview of every call — be it spam or otherwise.

Google’s Pixel 3 is a powerful, smart flagship phone that is impressive but somewhat predictable in its features. Like other flagship smartphones such as the Galaxy S9 or recently introduced A9, one of the biggest selling points for the Pixel 3 and 3 XL is the camera, and while the Pixel 3’s camera and display are sure to wow users again, this year it seems like the Pixel Stand for Google Assistant interaction, Call Screen, and potentially Duplex that stand out most.