Recruiters have a bias problem. A 2017 meta study from Northwestern, Harvard, and the Institute of Social Research in Norway found that hiring prejudice against black candidates hasn’t changed in the last 25 years, and that Latinos have only seen a “moderate” drop. It is not just races and ethnicities that employers are discriminating against — according to a recent paper authored by Harvard and Stanford researchers, women earn 78 cents on the dollar compared to men and are less likely to advance to the top of their fields.

The solution, Caitlin MacGregor says, is artificial intelligence. She’s the CEO and founder of Waterloo, Ontario-based Plum.io, a hiring platform that emphasizes “raw talent,” as opposed to skills and knowledge. According to Plum, hiring managers make conclusions based on an applicant’s name in 0.2 seconds and decide the outcome of an interview in 10 seconds, which can lead to hires that have a 46 percent chance of failing or leaving within 18 months.

Plum today announced features aimed at streamlining candidate searches. Match Rings lets hiring managers quickly compare applicants side by side, and Talent Re-Discovery allows HR departments to search through every would-be employee who has applied for a job at the company. Also new are collaborative features that make it easier for hiring managers and recruiters to fine-tune role requirements for a given job.

In the context of Plum, “talent” refers to characteristics like work ethic, teamwork, leadership, and consistency — things MacGregor claims are innately human and aren’t subject to bias. “We’re building a consistent new dataset that helps businesses hire better-quality people,” she told VentureBeat in a phone interview. “Our system finds people that never would have been discovered through a traditional hiring process.” 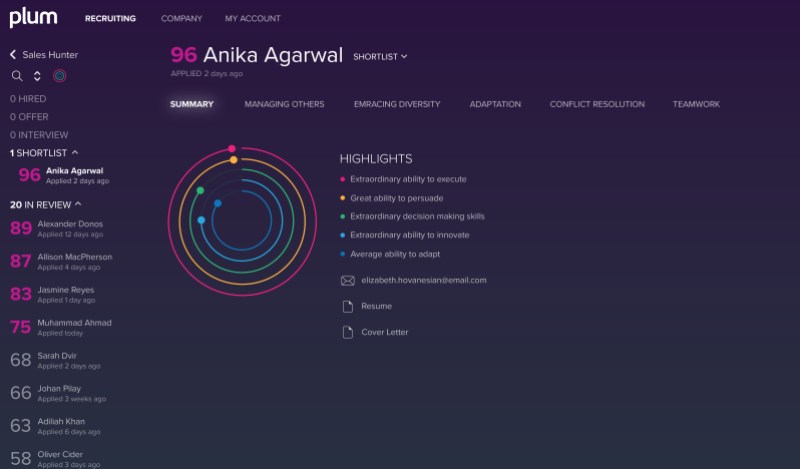 Above: The Plum.io hiring screen.

Unlike most recruitment tools, Plum doesn’t parse cover letters or CVs for keywords and GPAs. Instead, its machine learning algorithms draw on a database of 24 trillion data points built with the help of in-house psychology experts.

“When you look at [most] AI solutions, they take readily available public data [from] resumes and social media … and look at past patterns,” MacGregor said. She explains that Plum measures a candidate’s potential — separate from the job they’re applying to — and matches them “with the environment that will allow them to be the best versions of themselves. It’s diversity by design.”

First, recruiters complete a six-minute survey that helps Plum identify the core competencies for that particular role. Then, would-be employees fill out a 25-minute problem-solving and personality test in Plum that awards points for “talents” like adaptation (the ability to adjust to changes in the workplace), communication (conveying ideas effectively), embracing diversity (understanding others’ perspectives), and innovation (coming up with novel solutions). Each talent translates to roughly a dozen descriptors, like “persisting through ambiguity and change” and “operating effectively in stressful situations,” the subscores of which contribute to an overall Plum Match score.

Recruiters see applicants ranked by their Plum Match score in a summary view, along with highlights such as “great ability to persuade” and “extraordinary decision-making skills” — a model that MacGregor said is ideal for roles with evolving, and sometimes nebulous, requirements. 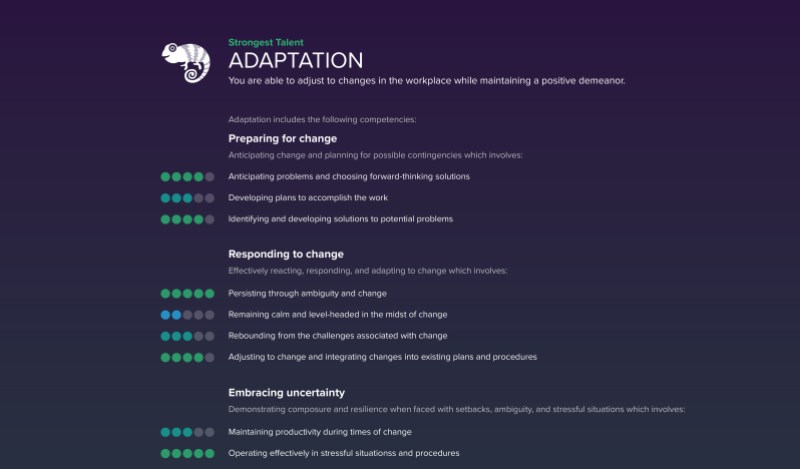 Above: The sub-scores that contribute to the Plum Match score.

“It helps companies ensure that they’re hiring for the skills of the future,” she said.

The results speak for themselves. We.org, a nonprofit organization based in Toronto, Canada, was able to reduce the number of interviews it conducted by 88 percent with Plum’s recruitment tools. And WestBay, a Florida-based home building services provider, cut new-hire turnover in its construction department and the time managers spent reviewing resumes by 43 and 37 percent, respectively.

But Plum’s tools aren’t just helpful in hiring. They can provide insight into a company’s culture, with graphs that illustrate gaps between cultural dimensions that management values (i.e., “commitment” and “achievement”) and the current workforce. It will even show how the executive team compares to managers and individual contributors and flag potential areas for improvement.

Plum charges by hires, based on a number that its clients agree to at the outset. To date, the company has raised $1.9 million in funding.