Big data has emerged as a lucrative by-product of the digital revolution, enabled by vast banks of information collated from the likes of smartphones, sensor networks, and cloud-based apps and databases. Deriving meaningful insights from this data can help cities figure out the real-time flow of people and traffic, for example, or enable life insurance providers to establish more accurate mortality rates. Extracting meaning from big data through analytics is estimated to be a $200 billion industry today, according to recent IDC numbers.

It’s against this backdrop that PredictHQ has come to fruition, offering a purpose-built data-aggregation platform that takes information from myriad sources related to events (public holidays, concerts, festivals, etc), meshes it with more “hard to find” data, adds a little machine learning to the mix, and sells it to third-party companies via an application programming interface (API).

PredictHQ emerged from stealth last year with $10 million in funding and a host of big-name clients. Uber, for example, may use PredictHQ as part of its surge pricing mechanism that helps the ride-hailing giant manage supply and demand, while a company such as Domino’s could use big data smarts to figure out how many drivers to have on at a time.

Today, PredictHQ has announced its first industry-specific product — built with airlines squarely in mind. Aviation rank, as the new tool is called, was developed during the beta phase by PredictHQ in concert with a handful of (undisclosed) European airlines and uses machine learning models to forecast which global events will impact the demand for flight bookings. These could be higher-profile events, such as Oktoberfest in Munich, or industry events like the World Dairy Expo in Madison, with around 20,000 people flying in to attend. Major conferences can also change location on an annual basis, which makes it particularly difficult for airlines to keep up.

But what is it about airlines that necessitates a dedicated product, compared to, say, ride-hailing companies? Well, not all events are created equal — and some are far more likely to attract inbound air traffic. PredictHQ sorts through the noise to figure out which events are likely to impact airlines specifically.

“Aviation rank identifies the events on a different and very specific criteria — which ones will impact ticket bookings and how much,” PredictHQ CEO and cofounder Campbell Brown told VentureBeat. “For example, a Kevin Hart comedy event might attract 40,000 people and is highly relevant to many of our users, but for an airline it doesn’t create inbound flight travel. Ultimately, big data is cumbersome, and simply saying you have a lot of data does not mean you are extracting value. Businesses crave smart data and the relevancy to make lightning fast decisions in a competitive landscape.”

Specific regions can also attract a cluster of events around the same time, a scenario aviation rank could prove particularly useful for — detecting what the company calls “the perfect storms of demand” that may go undetected by airlines laser-focused on detecting single large events.

“One of the biggest pieces of feedback we get from our airline customers is the real gold is in uncovering the clusters of smaller events that they would otherwise have missed,” Brown continued. “Often, these perfect storms of demand have just as much impact as the biggest events, if not more.”

Aviation rank leverages a database of around 20 million events globally, spanning concerts, conferences, sports events, and more, with PredictHQ allocating a score that represents the impact each event is likely to have on the demand for flights: 0 = no impact while 100 = a major impact. According to PredictHQ, it surfaces roughly 3000 “high-impact” events for airlines each month. 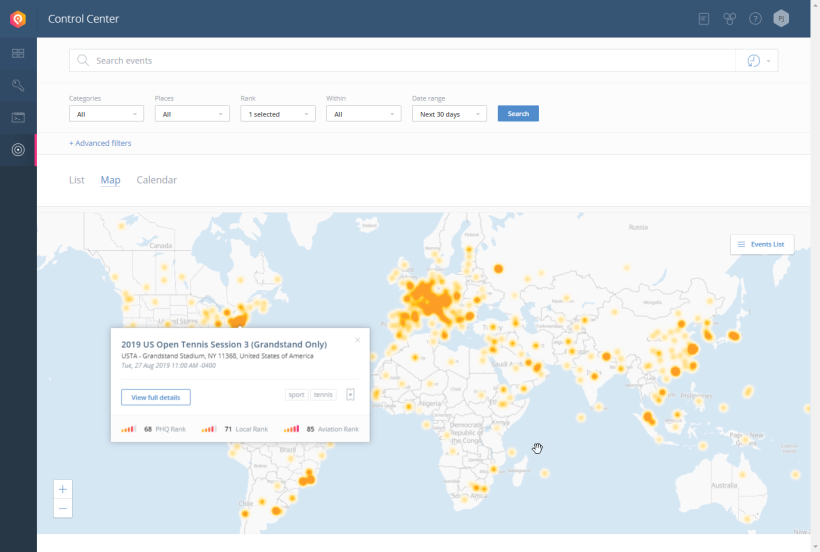 Above: Example high-impact events as shown in PredictHQ’s aviation rank

Airlines can also filter events based on their perceived significance, choosing to only focus on “significant” and “major” events, for example.

Above: Aviation rank inside PredictHQ

And aviation rank is more than a simple aggregator of events — the underlying technology figures out what type of event is taking place, the anticipated attendance, season, timing, and more and encompasses both structured and unstructured data. Underpinning this are machine learning and deep learning algorithms, which leverage natural language processing (NLP) techniques to figure out the wheres, whys, and hows of global events, including the impact they will have on airlines.

The resulting PredictHQ aviation rank knowledge graph takes historical airline data to identify spikes in demand and combines it with event data — this combination is what was used to train its machine learning system and develop its predictive models.

Other companies are also looking to bring predictive smarts to the airline sphere. Montreal-based Hopper has raised nearly $200 million for a platform that uses historical pricing data to tell customers the best time to purchase a plane ticket. And San Francisco-based Flyr recently raised $10 million for a data analytics product that forecasts airfare volatility.

In terms of how airlines elect to use aggregated event data and intelligence, well, there are a some obvious use cases. Similar to Uber’s surge pricing, aviation rank could impact an airline’s pricing on specific dates or it could be used to add additional flights, tapping into more new customers.

“Aviation rank revealed many events each month where the demand spike is so significant it merits adding additional flights to in-demand routes and offers a multi-billion dollar opportunity for airlines,” Brown added. “Aviation rank is about enabling better pricing, as well as the unique opportunity to reliably know which events offer the opportunity to win market share from competitors.”

This is a key point — aviation rank is being pitched as a way for airlines to gain a competitive advantage. If an airline can foresee a demand spike that will be generated by three or four events happening in a region at the same time, it can schedule more flights to cater to this demand and win more customers in the process.

“The all-important function of airline demand forecasting has left too much to guesswork for too long,” Brown continued. “Aviation rank is a breakthrough for demand intelligence in the aviation industry. It enables teams to make decisions based on instantly accessible facts, rather than losing hours each week Googling for events and guessing their impact so they can spend more time steering flights.”

And don’t be surprised if PredictHQ launches other industry-specific predictive tools in the future.

“We anticipate future ranks, such as transport rank, will be unique in their own ways, too, as we learn each industry’s own specifications, patterns and event quirks,” Brown said.