On October 2, Microsoft started rolling out the Windows 10 October 2018 Update. On October 6, the company halted the October 2018 Update after some users reported it deleted files from their Documents folder. This week, Microsoft finally outlined what it learned and what it’s changing to make sure this doesn’t happen again. The company has admitted its AI chops, telemetry data, and overall process can’t be trusted alone, so it’s giving control back to its users.

Microsoft made multiple announcements yesterday that appear to be a direct response to last year’s screwup. The clearest reminder is that the next update is called the Windows 10 May 2019 Update (instead of the April 2019 Update). Instead of launching this month, it will become available next week in the Release Preview Ring to Windows Insiders and will only start to roll out broadly “in late May.” But that’s only part of the story.

Previously, Windows 10 feature updates were automatically initiated “once our data gave us confidence that the device would have a great update experience.”

Going forward, feature updates will spend more time in the Release Preview Ring, during which Microsoft will gather more compatibility and performance feedback. The company will also use this time to tap its ecosystem partners, including original equipment makers (OEMs) and independent software vendors (ISVs). OEMs will begin manufacturing new PCs and devices with the latest build, and both will deploy the update internally with their employees. Microsoft will also internally deploy the latest feature update during the Release Preview period and encourage employees to do the same on their personal devices. An expanded population and more time will naturally result in more data.

Changes to data collection don’t mean much if you can’t properly analyze it. Microsoft promises to make “significant new investments” in AI to “both detect high-impact issues efficiently at scale and further evolve how we intelligently select devices that will have a smooth update experience.”

Microsoft says it is applying natural language processing (NLP) and machine learning (ML) to identify serious issues faster, even when few people report them. The company wants to detect all types of low-volume, high-severity issues. Furthermore, Microsoft claims it has advanced its capability “in the area of data loss” — the main problem with the October 2018 Update. The company says it has improved the clustering, classification, and routing of the roughly 20,000 pieces of daily customer feedback so top issues can be investigated by engineers. All in all, Microsoft claims its high-severity issue detection capability has been upgraded from “days” to “hours.”

Microsoft further claims its intelligent rollout ML model can now better differentiate devices that will have a good update experience. The model uses new label criteria so it can be trained on a broader set of issues (see the graph above). 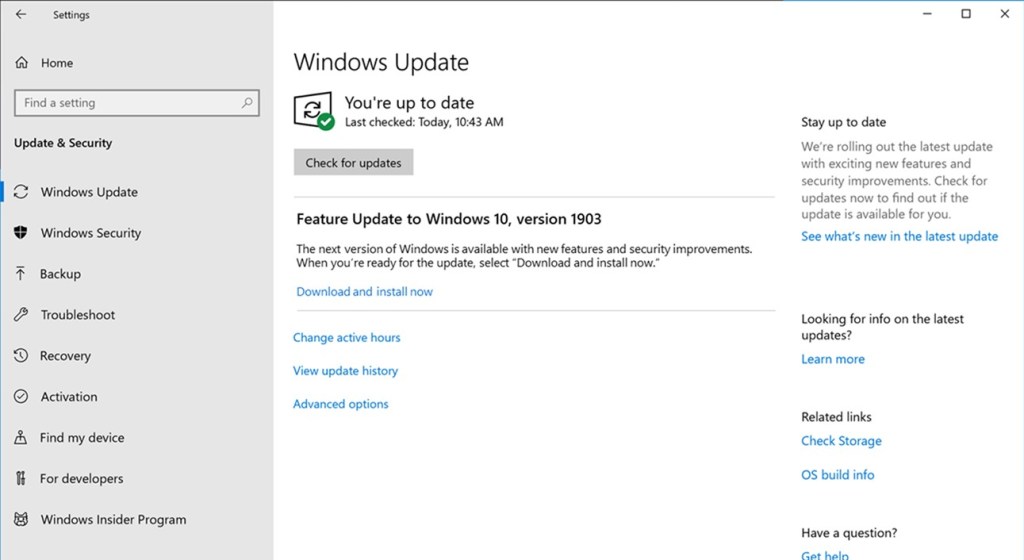 But ultimately, Microsoft isn’t confident all of that is enough. The strategy is merely an improvement on the one that failed with the October 2018 Update. So the company is giving users back control in four ways starting with the May 2019 Update:

Windows 10 users who were burned by an update will likely see this as a win. And it undoubtedly is a win for users who hate dealing with updates. But overall this is a loss for not just Microsoft, but the entire industry. Updates are critical for performance, stability, and most importantly, security. The sooner Microsoft can figure out how to get its AI, data, and overall process in order, the better off the 800 million devices running Windows 10 will be.