We’re going to meet a lot of robots with artificial intelligence in the coming years. But will we get any as smart as Albert Einstein? A Hong Kong startup called Hanson Robotics wants to make that happen with the introduction of Professor Einstein, a walking and talking robot that looks like the famous scientist. 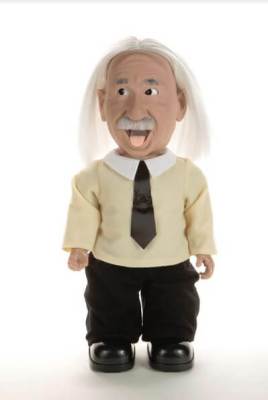 Hanson Robotics is announcing a Kickstarter crowdfunding campaign today to raise money for the robot.

Professor Einstein is a robot who will be your friend and science tutor. Paired with the Stein-O-Matic app for iPad or Android, the Wi-Fi-connected robot lets you interact with Einstein the scientist. He will take you on a journey of discovery and adventure, revealing the secrets of the universe, playing math games with you, telling jokes, and even answering your questions by pulling data from the cloud.

This little robot has inherited all the intelligence and science know-how of Albert Einstein so you can explore the world through his eyes. He recognizes your voice and loves to chitchat about theoretical physics, the weather, and anything else. He has more than 50 realistic facial expressions and gestures.

Professor Einstein responds to your questions and can play free games via the Stein-O-Matic app. He gathers new science data from the cloud (and comes with a year of free cloud service), interacts with Android tablet or iPad to teach science and math, and operates up to three hours on rechargeable batteries (which are included).

Hanson Robotics targeted the robot at those 13 and older. Over time, the company has some big ambitions to fulfill. Its long-term mission is to “dramatically improve people’s everyday lives with affordable, highly intelligent robots that teach, serve, entertain, and are capable of developing a deep relationship with people.”

David Hanson, founder and CEO, formed the company in 2013 in Sha Tin, Hong Kong. He assembled a team of roboticists, AI experts, scientists, and others for the new venture.

The company conceived the idea for Professor Einstein in October 2015, and it obtained a license for Albert Einstein from Greenlight Rights in December of that year. The company showed off a prototype at CES 2017, the big tech trade show in Las Vegas earlier this month.

Hanson Robotics plans to deliver the product in the spring of 2017.