Everyone knows the name Tesla Motors. High-profile VC fundings, a high-performance sports car and its layoffs have gotten the company endless coverage. However, there’s also a slew of lesser-known electric car companies. One of the handful with real potential (and real funding) is Miles Electric Vehicle, a Santa Monica, Calif. company with plans to release a highway-speed electric car, the XS500, in 2009.

Miles already sells a few low-speed models, but the XS500 will be the most acceptable to Americans — with a top speed of over 80mph, a range of over 120 miles, and the looks and features of a normal car, unlike some all-electric designs that many people find downright bizarre (see some examples here). The planned price is in the $35,000 to $40,000 range, cheaper than Tesla’s Whitestar, which is aiming for $50,000. The company caught my attention with a recent $15 million financing, so I called up CEO Jeff Boyd for a quick interview.

Do you think you’ll get competition from bigger companies?
We hope that there is a lot of competition. A decade ago, the all-electric car failed for a variety of reasons. But at this point, we’ve got the catalysts: The homeland security issue, the emissions issue — this is no longer a fad, a niche market or a matter of curiosity. We think it’s a revolution, and we hope manufacturers all over the world are working in the area. It’s going to take a lot of work and money to make the dream come to fruition. There’s plenty of market to go after, and we anticipate being one of many.

Will you be competitive with larger automakers?
From a technology standpoint, we feel that we can compete. As far as branding and distribution, the traditional automakers are very advanced and mature. But there’s plenty of room in the market when there’s an emerging business. If you look at the US selling 16 million new cars a year, Europe doing a similar number and about 50 million total around the world, there’s no reason we shouldn’t have enough sales to make a business. We welcome competition. We want everyone to jump in so we can reduce our reliance on foreign oil and change how we handle transportation.

Tesla has taken a lot of money — nearly $150 million to date, with more than twice that planned in the future. Will you need to take less money than Tesla has to commercialize?
We don’t anticipate needing anywhere near that amount of money. Our original private funding and the first round of our equity financing looks like enough to continue research on the XS500 and expand our distribution model.

Where does design come in?
There are three keys to our business model. First and foremost, we want to be all-electric. Second, we want to be completely safe and meet all the regulations. And third, we want to be low-cost. In order to be low cost, we’ve adapted chassis that have already been manufactured. Rather than starting with a clean sheet of paper and coming out with a completely new chassis design for our low or high-speed vehicles. This is allowing us to keep our costs down. If we’re going to bring a car out that will really change our reliance on oil, it needs to be cheap. [editor’s note: It’s also worth noting that Miles manufactures its vehicles on cheap production lines in China. Tesla also used a pre-existing chassis for the Roadster, but it was a very expensive model from Lotus.]

The cost is still high for the XS500. Will prices come down?
The cost of lithium ion [batteries], which is right now still a fairly expensive technology, will come down over time. We also have a five-year development plan with a variety of models in it. The next model after the XS500 is a small cross-over unit that will be priced lower. Whether we can reduce the price on the XS500, we’re not sure. But even if we don’t, we’ll be bringing out lower-cost models over the next two to three years that will expand the market for all electric vehicles. 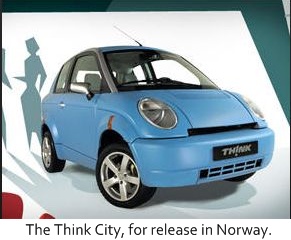 Speaking of design, what do you think of the Think?
I think it’s an interesting concept, but it might have more application in Europe. For one thing, fuel costs there are far higher there than they are in the US. They have shorter commutes, more congestion, and they’re used to a smaller chassis. We’d be happy for it to come to the US, but based on the size of the chassis and the stringent safety requirements, they’ll have challenges.

Will electric cars be competitive with plug-in hybrids?
I’m not aware of any [plug-in] hybrids that are very close to production. We’re a little over a year away, so we think we’re maybe two or three years ahead of most plug-in hybrid vehicles. We applaud the efforts of the ethanol, hybrid and hydrogen fuel cell communities, but fundamentally, we think those are transitional technologies toward all-electric. In effect they [all-electric cars] have zero emissions. About half of our electricity is from coal, but the technology exists to change that. It’s within our grasp to generate electricity without any emissions. We also like all-electric because the US electric utility grid is capable of handling the charging requirements of a lot of vehicles without expanding greatly.

You took funding from a private equity firm, Angeleno Group, rather than a venture capital group. Why?
The principles [directors] of Angeleno Group have been associated with Miles Rubin [the company’s founder] for many years, so it was natural as we developed for them to reach out to us. We weren’t seeking investors, but upon engaging we were impressed with their true commitment to alternative energy. When you enter a partnership like that, it’s helpful if it goes beyond the cash infusion. If they can help with planning and business development, it can really be meaningful.

What sort of future do you envision? Acquisition, IPO, staying private?
We really don’t have any plans to do any more than continue on the path we’re on, as a private company.