Can sensors see behind the corners of obstacles in real time? As it turns out, yes. A study by researchers at Stanford, Rice University, Princeton, and Southern Methodist University published in the journal Optica proposes a system that’s capable of producing around-the-bend images at high resolutions and speeds. It’s able to distinguish the submillimeter details of hidden objects from 1 meter away, and according to coauthor Felix Heide, it could be used to make out things like the license plates of hidden moving vehicles and personnel badges worn by walking individuals.

“Non-line-of-sight imaging has important applications in medical imaging, navigation, robotics, and defense,” said Heide. “Our work takes a step toward enabling its use in a variety of such applications.”

Theirs isn’t the first method capable of constructing digital images that reveal what’s around a corner. Scientists at Intel Labs and Stanford University last year employed sets of speakers and off-the-shelf microphones to capture the timing of acoustic echoes, informing algorithms inspired by seismic imaging to generate pictures of hidden objects. And in 2017, 2018, and 2019 MIT’s Computer Science and Artificial Intelligence Laboratory detailed a camera that reconstructs out-of-view scenes by analyzing shadows. 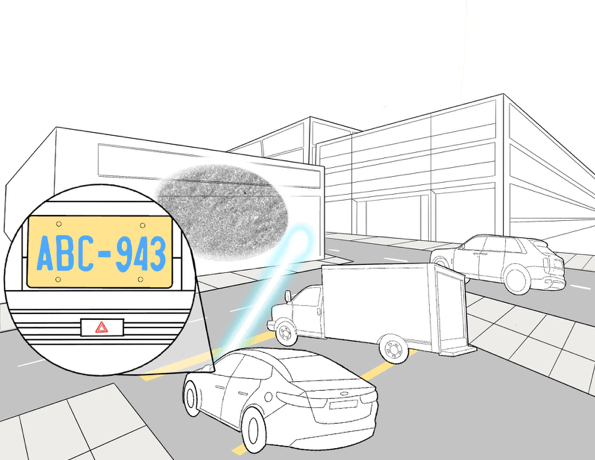 But this latest imaging system uses a commercially available camera and a laser source similar to those found in standard pointers. The beam bounces off a visible wall onto the hidden object and then back onto the wall, creating a distinctive light scatter known as a speckle pattern that encodes the shape of the hidden object.

To reconstruct the object from the speckle pattern, the researchers tapped an AI algorithm trained on synthesized data of characterized noise, which eliminated the need to capture experimental training samples. Crucially, it’s able to operate with the shorter exposure times necessary for real-time imaging, explained coauthor Prasanna Rangarajan. 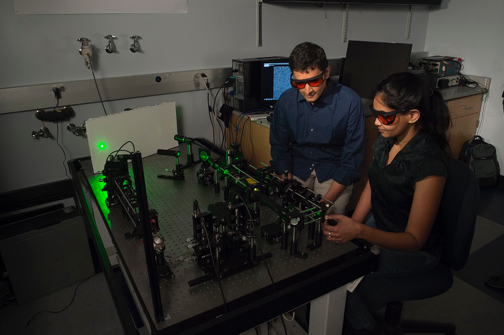 Above: The researchers’ imaging setup.

The researchers tested their technique by attempting to reconstruct images of 1-centimeter-tall letters and numbers hidden behind a corner 1 meter from a wall. Using an exposure length of a quarter of a second, the approach produced reconstructions with a resolution of 300 microns, or about 0.01 inches.

The researchers note that the system was developed as a part of the U.S. Defense Advanced Research Projects Agency’s Revolutionary Enhancement of Visibility by Exploiting Active Light-fields (REVEAL), a program that seeks to foster the development of technologies to image objects around corners. They say it could be combined with other imaging systems that produce low-resolution, room-sized reconstructions, which might enable future driverless cars to “look” around parked vehicles or busy intersections or help satellites and spacecraft capture images from the caves of asteroids.

The researchers leave to future work making the system practical for more applications by extending the field of view so it can reconstruct larger objects.