Temi, a robotics startup headquartered in New York, is betting big on its eponymous Temi telepresence product — and it’s taking new investors along for the ride.

The company — which also has a research and development lab in Tel Aviv and a manufacturing location in Shenzhen, China — today revealed that it has secured $21 million in series B financing led by John Wu, Alibaba’s former chief technology officer and a longtime existing investor, with participation by Generali Investments and Hong Kong internet of things and wellness giant Ogawa. Ogawa has agreed to partner with Temi to establish a marketing and distribution plan, with the ambitious goal of making the startup’s products available in over 180,000 points of sale around the world.

The upcoming Consumer Electronics Show in January will kick off Temi’s official launch, following limited availability at 15 locations in the U.S. and online. Temi’s series B comes after its parent company, Roboteam, raised $50 million from FengHe Investment Group and Wu three years ago and a $12 million round in 2015, and brings Temi and Roboteam’s total comined raised to $83 million.

“This investment aligns with our company’s strategy to broaden our global business with worldwide partnerships and to transition seamlessly and quickly from R&D phase to sales mode,” Yossi Wolf, Temi’s CEO and founder, said. “Temi incorporates unparalleled technology at a reachable price, making it the ultimate way for people to communicate … It will dramatically transform the way we conduct business and connect with loved ones from afar.”

Temi is something of a pivot for Roboteam, Temi’s parent company, which for the better part of eight years developed all-terrain robotic systems for military deployments. It’s a lucrative business — Temi’s defense contracts have generated over $100 million in revenue — but the way Wolf tells it, a consumer robot was always the endgame. 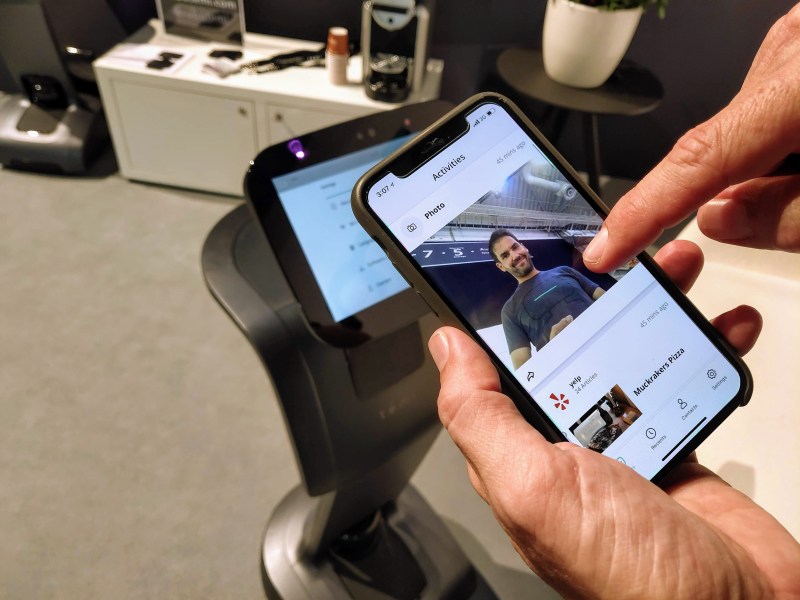 Above: Temi, along with its companion app.

“I’m an ’80s kid. I grew up dreaming of robots, like in the Jetsons,” Wolf said. “It’s always been a desire of mine to make robots for the consumer and home space.”

Leveraging the aforementioned sensors in addition to an in-house ARM-based PCB and lidar array, Temi can autonomously explores its surroundings and generate a 3D map, and in time start to “remember” particular locations. It’s even robust enough to follow a person through a room (by tracking their legs) while avoiding obstacles such as furniture, pets, and laundry.

On the software side of things, Temi is controlled in one of two ways: with an app or through voice recognition. Using the app, users dialing into its built-in teleconferencing software can speak through Temi’s color display and 20-watt Harman Kardon speakers. The voice recognition — powered by a homegrown assistant that currently supports English and Chinese — lets users within earshot instruct it to play music, pull up YouTube videos, search for restaurants, or get a weather forecast for the week ahead.

Temi supports virtually any Android app via a software development kit (SDK). And eventually, the robot will integrate more closely with Temi’s companion smartphone app — the team is working on an “activity history” timeline that shows past video sessions and voice search results, as well as a feature that lets video chat participants tap on a person to have Temi follow them around.

Temi will start at $1,500 — less than a typical MacBook, Wolf points out. Temi plans to ramp production up to as many as 30,000 units a month by the end of December, when preorders are expected to begin shipping in earnest.