This takes UiPath’s total funding to more than $1 billion, following last year’s $153 million and $225 million series B and C rounds, which came just 6 months apart. The company also now claims a valuation of $7 billion — up from $3 billion at its series C valuation just seven months ago.

Founded out of Bucharest, Romania in 2005, UiPath began as a software outsourcing startup called Deskover that built automation libraries and SDKs for major companies, including Microsoft and Google. In 2015, Deskover changed its name to UiPath and doubled down on its efforts in the RPA realm. It moved its headquarters to New York City in 2017, though its main development hub remains in the Romanian capital.

As with similar platforms, UiPath’s core selling point is that it brings automation to enterprise processes through “intelligent software robots” that help businesses carry out laborious, repetitive tasks using computer vision and rule-based processes. The technology is installed on top of business applications, such as enterprise resource planning (ERP) software or customer relationship management (CRM) tools, to learn from human actions and emulate these tasks. 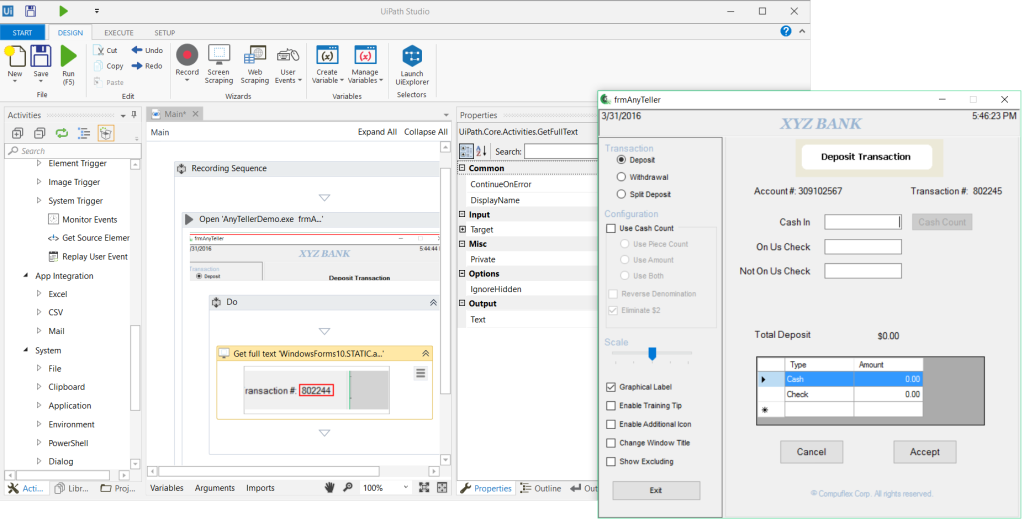 RPA technology is hot — some estimates peg the industry at $2.3 billion today, and it is expected to grow to more than $4 billion by 2022.

“We are at the tipping point — business leaders everywhere are augmenting their workforces with software robots, rapidly accelerating the digital transformation of their entire business and freeing employees to spend time on more impactful work,” said UiPath cofounder and CEO Daniel Dines. “UiPath is leading this workforce revolution, driven by our core determination to democratize RPA and deliver on our vision of a robot helping every person.”

There has been a spike in investments across the RPA sphere over the past year or so, with the likes of Automation Anywhere securing $300 million from SoftBank, Kryon raising $40 million, Softomotive nabbing $25 million, and Automation Hero reeling in $14.4 million.

With another $568 million in the bank, UiPath is well positioned to continue its recent growth spurt, which has included taking its annual recurring revenue (ARR) from $8 million to more than $200 million over the past 24 months; securing big-name customers such as Google, McDonald’s, and American Fidelity; and expanding its employee count by a factor of 16 to reach 2,500 people across its 30 offices globally.

The company will use the new funds to expedite investments in its various “workforce education” programs and R&D, with a particular focus on “applying AI to RPA,” UiPath’s chief marketing officer (CMO) Bobby Patrick told VentureBeat. He also said the company may invest in strategic merger and acquisition (M&A) activity.

Given the size of its latest raise and valuation, UiPath certainly appears to be fast-tracking toward an IPO. It wouldn’t be the first RPA company to hit the public markets either, with the U.K.’s Blue Prism landing on the London Stock Exchange back in 2016. While UiPath didn’t offer any specifics, it did strongly hint that it is at least laying the foundations for an IPO in the foreseeable future.

“Our focus is on raising capital as needed to sustain our commitment to our customers’ success and workforce education while we continue exponential growth,” Patrick said. “We are practicing what it takes to be a public company today, including implementing public company-caliber financial accounting, processes, and controls and building the industry’s strongest management team, [which] includes executives from HP, Microsoft, NetApp, Nutanix, and SAP.”