Apple’s release of its HomePod smart speaker and Amazon’s success with its rival Echo products recently reignited discussion over flaws in the digital assistant Siri, and one of Siri’s cofounders has explained why the feature is so disappointing. In an interview with Quartz, Norman Winarsky suggests that Apple may have given Siri an overly ambitious collection of responsibilities and hasn’t made the feature reliable enough.

Just after Apple acquired Siri from Winarsky’s company, he said he believed that Apple would use Siri to start another revolution but claimed not to know any specific plans. He optimistically expected that Siri would learn more about its users over time, predict what they needed, and become better at conversation — apparently to the point of eliciting classic Apple “surprise and delight” from users. But he says that element “is kind of missing right now,” as Siri has fallen short of his predictions. 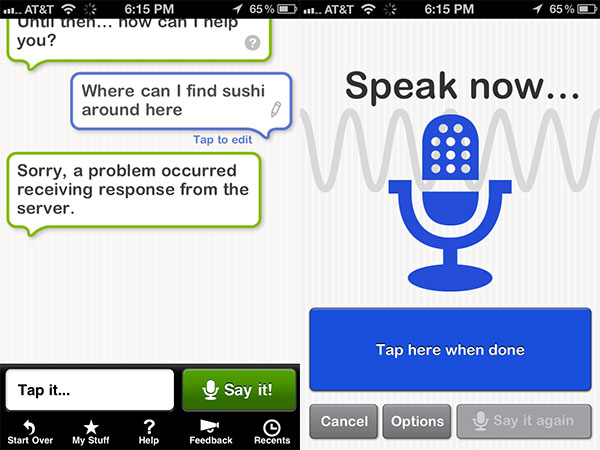 Above: The original version of Siri, launched as a free iOS app before Apple acquired it.

According to Winarsky, Siri was originally designed to serve solely as an entertainment and travel concierge, and indeed the company’s short-lived iOS app offered only a handful of features. It had the ability to look up restaurants, movies, events, and local points of interest on request and to read the weather, call a taxi, check flight status, and dictate tweets to post on Twitter. After the acquisition, Apple decided to launch Siri as a full-fledged assistant for all areas of a user’s life, which Winarsky said was a bigger challenge that would clearly take longer to perfect.

The original vision for Siri was to do a few things “flawlessly,” for instance automatically handling a cancelled flight by offering you a route home by car or a hotel room ready to book for the night. Once Siri mastered the nuances of handling each specific task, it could be expanded to another task, growing organically. Instead, Apple radically expanded Siri’s list of capabilities and didn’t fully flesh any of them out. “They’re probably looking for a level of perfection they can’t get,” opined Winarsky. “These are hard problems, and when you’re a company dealing with up to a billion people, the problems get harder yet.”

Beyond the issues Winarsky cites, Apple’s dramatically heightened focus on user privacy certainly had an impact on Siri’s development. Rivals such as Google and Microsoft have leveraged user permission to search cloud-based data that their assistants can use to anticipate user needs, a step Apple refused to take because of privacy considerations. Instead, Siri relies heavily on the smaller subset of user data stored on the iOS device, to its predictive disadvantage. The article notes that between its greater access to data and superior problem-solving skills, Google Assistant has already surpassed Siri’s ability to navigate travel — just one of several areas where Apple had an early lead.