Siri was already coming off a bad year. Then HomePod‘s messy release cast a spotlight on its many failings as a digital assistant. Now the floodgates are open: Former Siri executives and engineers are openly discussing its troubled inner workings, while competitors have rushed out improved AI apps for Apple devices.

So much has changed recently that it’s worth looking at the current state of Siri’s rivals. From Amazon to Google, IBM, and Microsoft, here’s what’s happening in the Apple AI space.

One of the most confusing stories of the past several months was Amazon’s mid-January announcement that Alexa — its digital assistant — would “soon” come to Alexa, its iOS app. Until recently, iOS users could merely use the Alexa app to set up Alexa devices, but the app didn’t include assistant functionality. A sub-$50 Echo Dot was Amazon’s cheapest Alexa entry point. 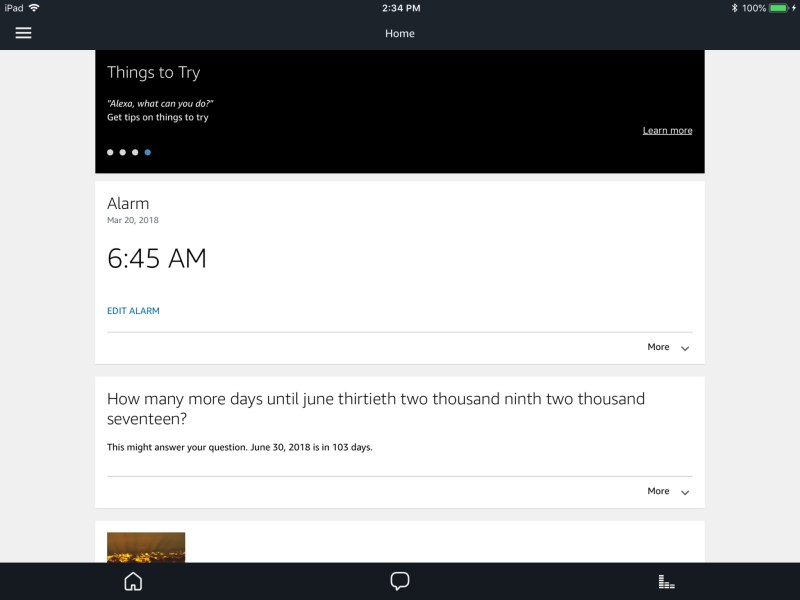 At the end of January, Amazon quietly enabled the Alexa assistant to be used inside the free iOS app. Now iPhone, iPad, and iPod touch users can access Alexa’s gigantic collection of skills just by speaking into their devices. Like every other AI assistant except Siri, you need to have the iOS app open to make requests. Limited Alexa support is now also found in Amazon’s classic, eponymous shopping app. 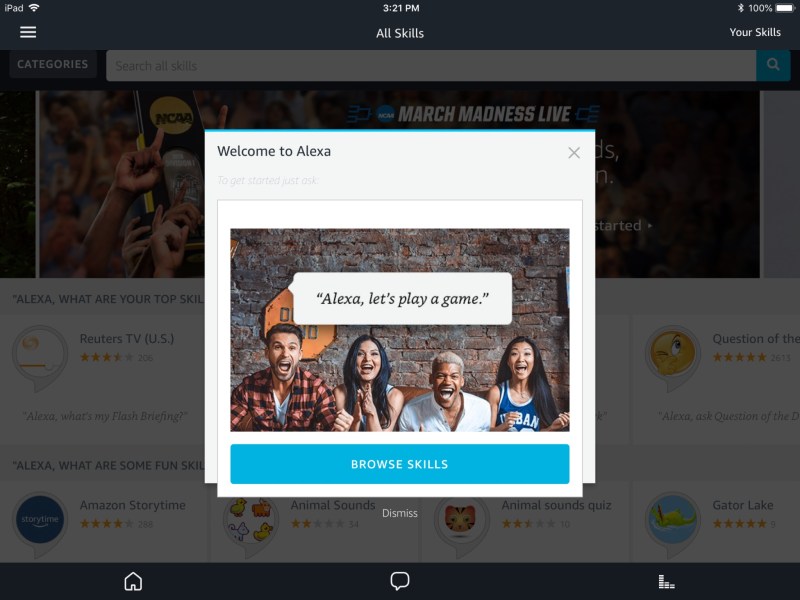 This month, the standalone iOS Alexa app added the ability to make landline-style phone calls in the U.S., Canada, and Mexico, a feature that’s found in some Echo devices. For Apple users, this means that an iPad or iPod touch previously limited to FaceTime calls can now reach people via telephone, as well. The iOS app still has its issues, particularly when you’re trying to set up clock photo faces for the recently released Echo Spot, but the added Alexa assistant and calling functionality is pretty great.

It’s also worth noting that Amazon’s shopping app (above) has historically flexed the company’s AI muscles in a variety of ways. Amazon was one of the first apps to use AI to identify products using iPhone cameras, enabling customers to order items they found in stores, and voice searching functionality has been built into the shopping app for a while. Apart from helping Amazon to improve the purchasing experience for its customers, these features haven’t been much of a direct threat to Siri, but they’ve demonstrated that Apple isn’t the only “simple experience”-focused tech company out there.

Google used this year’s CES to pitch Assistant’s addition to various new devices, foreshadowing this month’s addition of iPad support to its iOS Assistant app. While fairly predictable, Assistant works very well on the iPad, integrating with both Google services and native iPad apps running in split-screen mode. As a report pointed out earlier this year, Assistant has the highest rate of accuracy as a digital assistant, and if you’re OK with whatever might be taking place on Google’s servers, its cloud AI can work predictive magic. 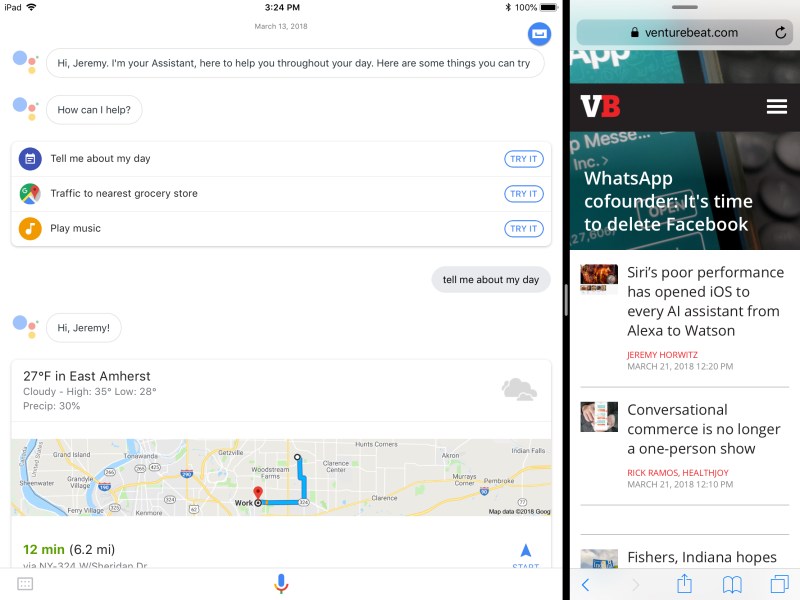 But Google didn’t stop with Assistant. This week, it brought a feature called Lens to iOS devices, starting as a button in Google Photos (below). Lens uses Google’s servers to perform image analysis on command, providing web links based on the items and text it recognizes. When the feature works — as it frequently does — you’ll see a web link to the correct food item or art gallery you’re looking at, ready to click below your photo. Conversely, a search of Google Photos for “hamburger” will find all of the recognizable images of burgers in your library. 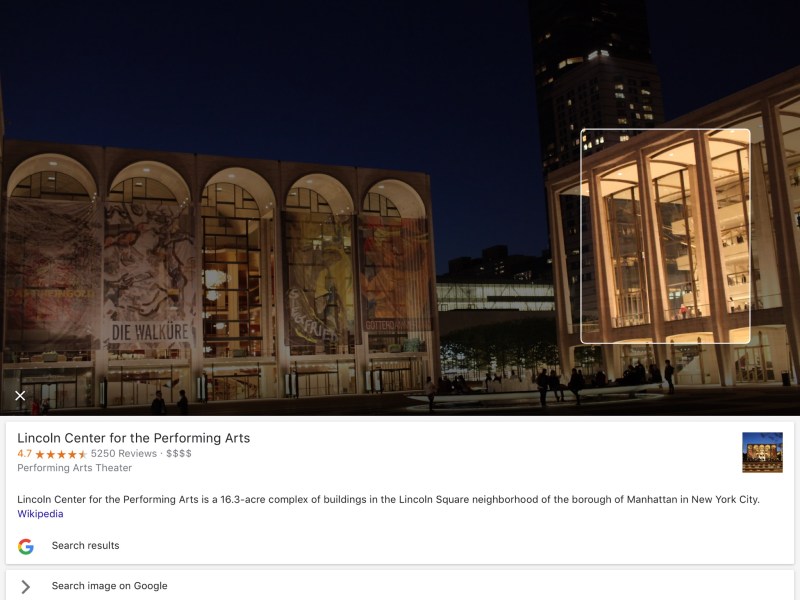 The latter feature is not entirely new, but it’s getting better all the time, and a lot more specific. Seeing Lens properly identify an obscure Chinese sandwich called Rou Jia Mo blew my mind — just imagine the machine learning it took to get to that point! Between Assistant’s accuracy and Lens’ breadth of knowledge, Google feels far ahead of the pack in AI at this point. And that doesn’t even count the AI-assisted features that are now quietly drip-dropping into other Google apps, such as Maps, all the time.

IBM’s Watson AI system has been around longer than Siri, but it’s less well-known because IBM has pitched Watson as a backend for other companies’ services. One year ago, we ran an article called “10 ways you may have already used IBM Watson,” which included a quote from IBM’s Alyssa Simpson: “Chances are, you’ve interacted with Watson without realizing it.” That’s an understatement — even when Watson’s role in providing chatbot customer service or analyzing social media posts for a new company is publicly announced, it doesn’t seem like “news” any more. This week, Apple and IBM announced that Watson can now be used as a deep-thinking AI backend for Apple’s Core ML, letting developers hand off AI tasks such as image recognition and problem diagnosis to Watson for cloud processing. IBM says Watson will enable apps to get smarter over time as they learn from user activity, offering real-time analysis and insights on processed data. As one might gather from these features, Watson won’t be competing with Siri on these tasks.

However, IBM in a separate announcement debuted the Watson Assistant, an upcoming AI enterprise assistant. Like most of its earlier Watson collaborations, Watson Assistant will power other companies’ digital assistants, including in cars, appliances, and hotel rooms — but it probably won’t be identified by name. Here, Watson won’t just handle AI heavy lifting behind the scenes; it will also be able to interpret and respond to spoken requests. While it’s unlikely that Watson Assistant will have its own standalone app for Apple devices, it’s going to underpin plenty of third-party apps, thereby potentially competing for mindshare with Siri.

Like Google, Microsoft’s big move this year was to bring its digital assistant to the iPad — February saw the release of a tablet version of Cortana, building upon the prior iPhone-only version of the app. The iOS version of Cortana includes an app that can run in full- or split-screen mode, plus widgets to make app access easier and more pervasive within iOS. 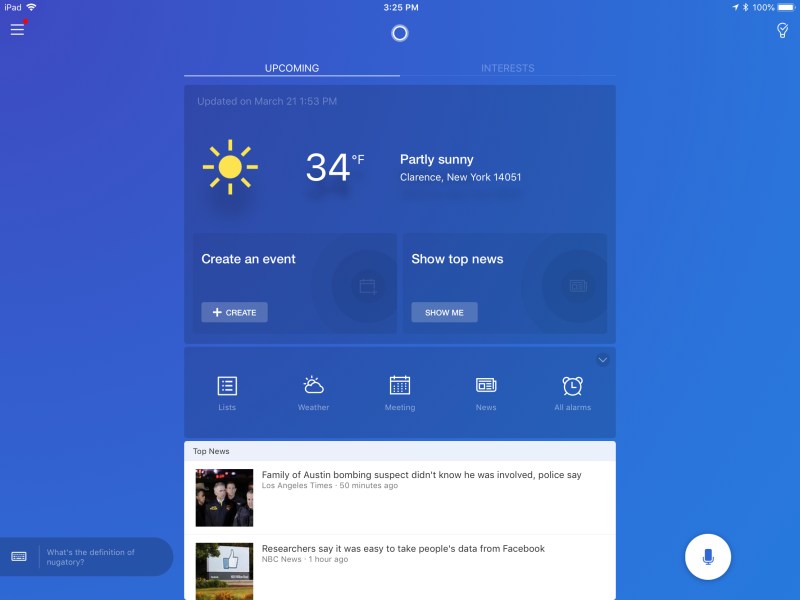 While Cortana isn’t a head-turner on its own, its integration with Microsoft’s services could make it as compelling for Office and Live users as Google’s Assistant is for students and G-Suite business users. Microsoft has also continued to develop its Bing search app — including a compelling plug-in that auto-translates foreign language Safari web pages — and its own Edge web browser for iOS.

Like Apple’s Continuity feature for Macs, Microsoft includes a “Continue on your PC” option that lets you shift an Edge session to your Windows PC automatically. It’s a subtle hint from Redmond that you don’t need a Mac to enjoy Mac-like integrations with your iPhone.

The threat to Apple is a lot bigger than just Siri

At this point, the only thing preventing one or all of these rivals from establishing a bigger place on Apple’s devices is the company’s reservation of a dedicated button (and voice prompt) for Siri. If users could assign the Siri button or “Hey, Siri” command to whichever assistant they wanted, it’s highly likely that Amazon and Google would do as well across Apple’s devices as they did in the App Store last December. It would be a lot like the Apple Maps/Google Maps disaster, and Siri would need to claw its way back into usage one device at a time.

That’s not going to happen: Apple is certainly going to save a place (and the easiest means of access) for Siri on its own devices. But even though Siri exists on nearly every iPhone, iPad, iPod, Apple Watch, Apple TV, HomePod, and Mac that Apple sells today, no one loves using it. Apple’s rivals know this, and they’re leveraging Apple’s lethargy with Siri to make AI inroads with disenchanted users.

Between their dedicated assistants and standalone features in other apps, Amazon, Google, IBM, and Microsoft are providing just how ubiquitous — and useful — AI is becoming for iOS users. Once an Apple user feels comfortable relying on Amazon or Google for one set of services, other services and quite possibly device purchases will likely follow. Unless Apple figures out a way to turn things around, the fact that Siri arrived early to the “virtual assistant” party won’t mean much — it may just keep sitting alone in the corner as Apple’s frenemies lure its customers away.