Slack today introduced a range of upgrades that change how workplace apps function, further stepping away from the traditional bot to offer more advanced workplace apps capable of functioning with buttons and menus, even outside conversations in Slack channels.

App home is designed to act as a home page for apps, where updates can be shared without the need to send messages to a channel. One of the first apps to receive the App home feature is Google Calendar, which shows a stream of your upcoming meetings and lets you join a call, reschedule, or RSVP for an appointment.

“It’s so much easier to use now than it was when this was just a stream of messages notifications saying you have a meeting in five minutes,” Slack director of developer relations Bear Douglas told VentureBeat in a phone interview.

There’s also modal windows, which can pop up within Slack to share detailed information for more complex uses cases that require receiving input from users across multiple steps.

App home and modal windows are designed with Slack’s app design interface Block Kit and are available today. App home is available in open beta and will be generally available for app builders in the coming months.

Block Kit was made available for developers to quickly build apps in February and first introduced at the first Spec conference last year. Block Kit can make apps that display photos, use drop-down menus, collect data with cards, and utilize things like buttons and lists instead of completing tasks with words alone.

Changes to how Slack apps can function are scheduled to be announced today at Spec, Slack’s second annual developer conference in San Francisco. Slack’s App Directory may only contain 1,800 automated bots, but Slack dev platforms have been used to create 500,000 custom bots to share info or streamline workflows, from bots made to tell coworkers about each other’s birthdays to a bot HSBC uses to help new hires learn company acronyms and jargon.

Today most app interactions are seen in the bottom left in Slack, where you get messages from bots, but App Home will give developers and businesses making custom apps a way to serve up content in tabs and consolidate updates in a single stream.

Finally, to encourage app discovery, the Slack app will soon get a centrally located place to find SaaS integrations and apps, called the app launcher. Available in the coming months, the app launcher will share the most commonly used apps at launch but may expand to personalize recommendations based on the individual user. 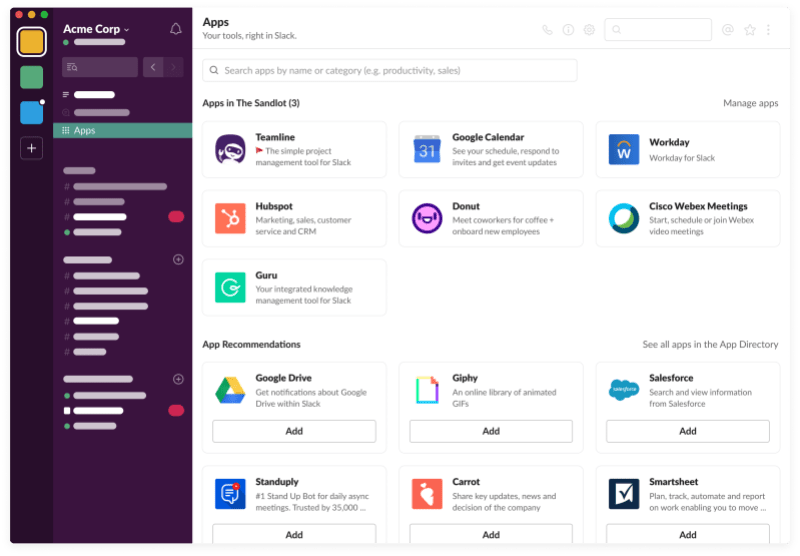 The first things users will see in the app launcher will be apps an administrator approved for an employee to use or apps that are already installed, addressing a pain point for average Slack users.

“They may not even be aware of the apps that are already in their team,” Douglas said.

Slack has a history of being slow to bring app discovery opportunities into the app, but the new App launcher may grow to include Personalized results based on your role within a company or industry.

“You can imagine in the future it might be something aligned to what your role in a company is so if you’re on the finance team here are the 5 apps that people tend to use,” she said.

Also new today: the expansion of Actions. Actions first launched at Spec last year to make it easy to do things like create an Asana task or Zendesk ticket attached to any message within Slack, but actions are now being expanded to become prominently available and no longer require a connection to messages.

Administrators will be able to assign actions to specific channels, and admin control of default actions based on a person’s role within a company is a possibility in the future, Douglas said.

“Creating a task may come from a conversation you’re having with a colleague or it might come from something that just occurred to you while you’re talking to a colleague that has nothing to do with your conversation, and so we want to create a surface for people to start interacting with apps in that way,” she said. 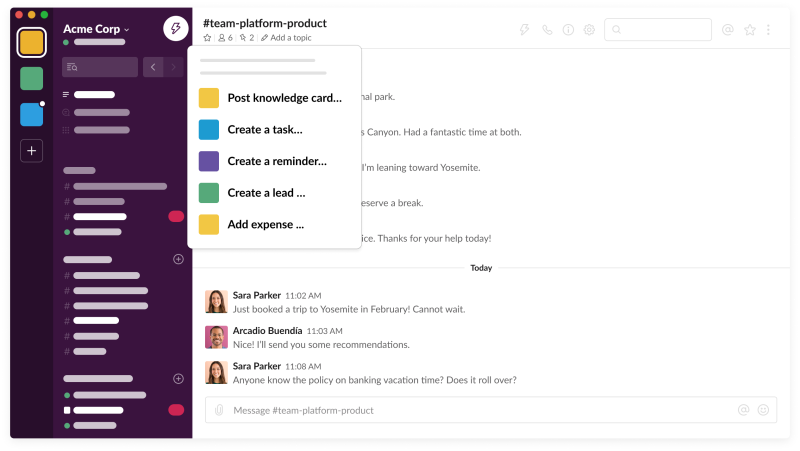 Above: Actions from Anywhere

Actions will also soon become available in the Slack search area so you can search “file an expense” or other tasks employees frequently need to do their jobs.

Actions from Anywhere is available in closed beta today and will be made generally available in the coming months.

In other recent Slack news, a revamped Salesforce app was recently introduced, and last week, Slack launched the Workflow Builder to make it easy to create a workflow or work from a pre-made template to do things like make a help desk request or praise a teammate.