SoftBank subsidiary HapsMobile, a joint venture established in 2017 by SoftBank and U.S. aerospace company Aerovironment, has announced a partnership with Loon, an Alphabet unit developing a network of balloons that beam internet access to remote areas.

HapsMobile will invest $125 million in Loon as part of a “long-term strategic partnership,” with Loon also gaining the right to invest the same amount in HapsMobile at a later date.

Loon is one of more than a dozen Alphabet subsidiaries and was spun out of Google’s parent company as an in independent entity last summer after five years as a “moonshot project.”

Loon balloons travel in the stratosphere about 20km above the Earth, where winds can vary significantly in terms of direction and speed. To compensate, Loon leverages algorithms and predictive models to ensure the balloons continue moving in the intended direction.

Loon’s balloons have flown some 30 million kilometers through the skies since the project’s inception, and last year the company revealed plans to deploy its technology to beam high-speed internet access to rural populations in Kenya — its first such rollout in Africa.

HapsMobile, which is 95% owned by SoftBank, has been developing a solar-powered, internet-beaming aircraft, dubbed Hawk 30. Reports of its maiden test flight from a NASA base in California recently emerged.

The company used today’s partnership announcement with Loon to officially unveil Hawk 30, which is an unmanned drone built for “stratospheric telecommunications” that travels at altitudes of 20 kilometers.

HAPS is an acronym for “high-altitude platform station” and essentially refers to an aircraft that can be operated similarly to a stationary Earth-bound telecommunications base for the purpose of delivering connectivity to places where it is not feasible to lay cables.

As SoftBank is one of the world’s largest telecom operators, it’s easy to see why it is investing heavily in HAPS — “flying base stations” will give it greater reach into untapped territories, such as “mountainous terrain, remote islands, and developing countries,” according to a statement.

Moreover, as the internet of things (IoT) and 5G continue to gain steam, solar-powered drones can link in with existing telecommunications infrastructure to provide additional capacity while ensuring constant connectivity when unforeseen events — such as natural disasters — hit the ground.

Above: Illustration of how HAPS can work in conjunction with existing infrastructure.

“Even in this current era of coming 5G services, we cannot ignore the reality that roughly half of the world’s population is without internet access,” noted HapsMobile president and CEO Junichi Miyakawa in a press release. “Through HAPS, we aim to eliminate the digital divide and provide people around the world with the innovative network services that they need.”

The Hawk 30 is 78 meters long, with solar panels and 10 propellers mounted to its wings. It flies at around 110 kilometers per hour and — given that it travels above the clouds — is constantly in contact with sunlight. That, combined with a favorable stratospheric climate, means the aircraft can fly nonstop for several months at a time. 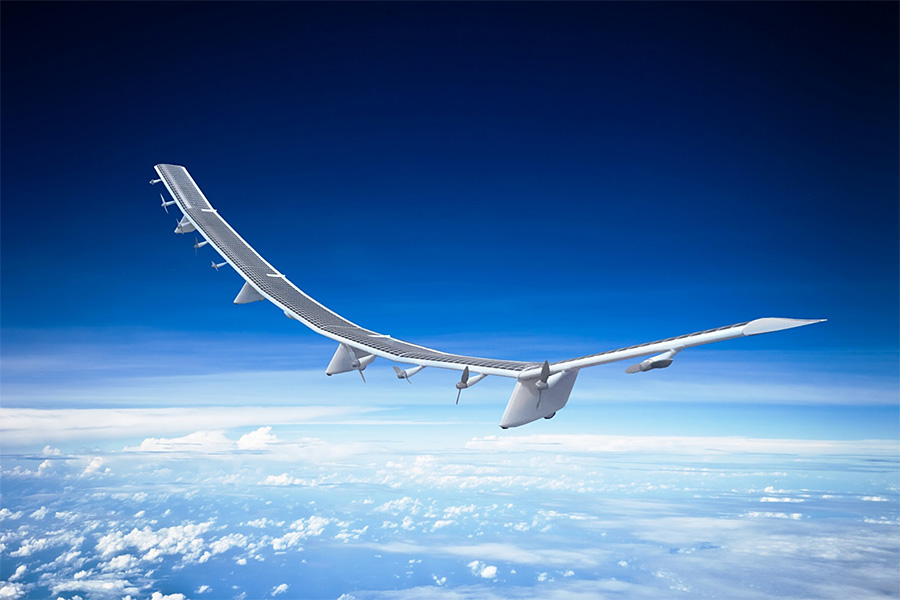 Though HapsMobile’s business is different from Loon’s, they do operate in the same arena. And the nature of HapsMobile and Loon’s partnership will extend far beyond financial commitments — they plan to build out various commercial collaborations to “accelerate the deployment of high-altitude network connectivity solutions,” which will include bringing mobile internet to more people and powering the burgeoning IoT and 5G movements.

“We see joining forces as an opportunity to develop an entire industry, one which holds the promise of bringing connectivity to parts of the world no one thought possible,” added Loon CEO Alastair Westgarth. “This is the beginning of a long-term relationship based on a shared vision for expanding connectivity to those who need it.”

Significant amounts of cash have been flowing into internet infrastructure from across the technology sphere, with the likes of Amazon, Facebook, and Google all investing heavily in everything from satellites and drones to submarine cables.

News emerged this week that Google’s very first privately owned subsea cable — stretching down the Pacific coast from California to Chile — is now complete. Altogether, Google is now directly invested in around 100,000 kilometers of undersea cables, which equates to nearly 10% of all subsea cables globally.

While solar-powered drones won’t replace traditional internet infrastructure anytime soon, they do represent part of a bigger push to increase coverage and capacity by developing new technologies — this includes huge investments in constellations of micro-satellites that will deliver broadband across the globe. Stratospheric drones operate between ground infrastructure and satellites, which helps avoid some of the issues associated with other methods, such as “ground clutter and significant latency issues,” according to SoftBank.

“Building a telecommunications network in the stratosphere, which has not been utilized by humankind so far, is uncharted territory and a major challenge for SoftBank,” Miyakawa added. “Working with Alphabet’s subsidiary Loon, I’m confident we can accelerate the path toward the realization of utilizing the stratosphere for global networks by pooling our technologies, insights, and experience.”