In the not-too-distant future, your pizza will be ordered through robots, made by robots, and delivered by robots.

Earlier this week, Domino’s revealed a new pilot project in a handful of Dutch and German cities that uses automated ground drones to deliver food within a one-mile radius of select stores, thanks to a tie-up with Starship Technologies — a robotics startup created by Skype’s founders.

This news followed a number of similar partnerships announced by Starship Technologies across Europe and North America, including with U.K. food delivery giant Just Eat, Postmates, and DoorDash.

As we shift ever closer to a world where robots are no longer confined to the fantastical visions of science fiction movies, it’s worth taking a quick peek at the current state of play to see how close we actually are to being overshadowed by machines. And what better place to start than with good ol’-fashioned pizza?

We are a global company, and we are eager to progress innovative technology in all of the countries in which we operate –– we are very excited to be partnering with Starship, as it brings regular deliveries by robot one step closer to commercial operations. With our growth plans over the next five to 10 years, we simply won’t have enough delivery drivers if we do not look to add to our fleet through initiatives such as this.

As dubious as that reasoning may sound, delivery isn’t the only facet of the pizza-ordering process humans need to be concerned about.

Last September, Domino’s launched a Facebook Messenger bot that promised “conversational” ordering in the U.S., a month after a similar initiative was introduced in the U.K. Through the bot, customers can use a pizza emoji to reorder their favorite food and can track orders through the app. 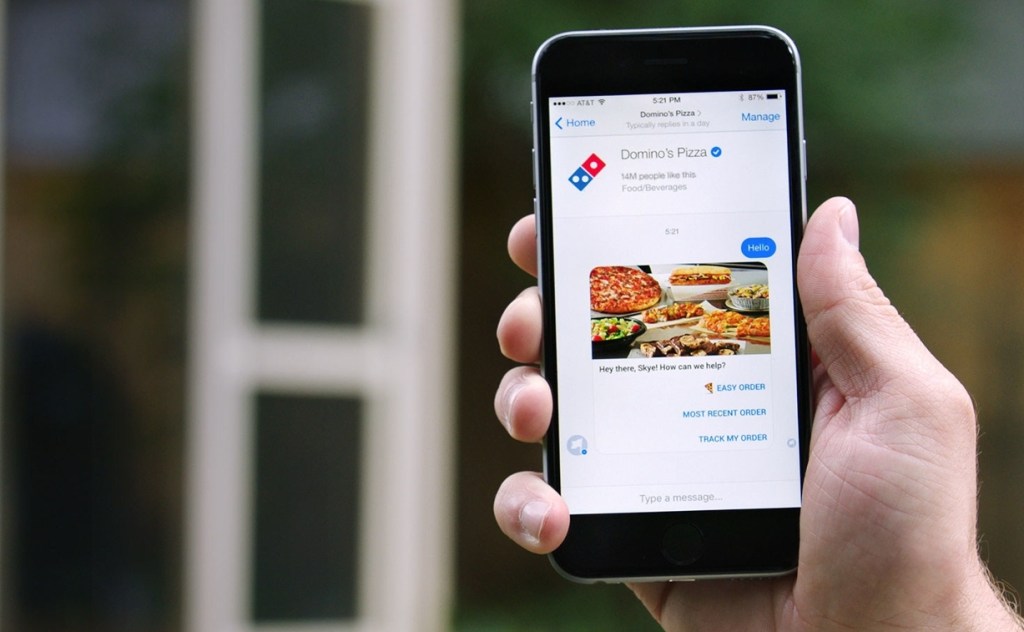 A major obstacle with the bot at the time it was released was that it really wasn’t all that smart — you couldn’t ask it things, or tweak an order — it was all about accessing your previous order history. But in February, Domino’s added the full menu, including customized orders, allowing hungry Facebook Messenger users to go all-in at the touch of a few buttons.

In terms of making the actual pizza, well, robots are pretty much already there, too. Fledgling food startup Zume Pizza, based out of Mountain View, California, is operating a commercial kitchen where robots apply the sauce and spread it on the dough, while another places the pizza in the oven.

Elsewhere in the food production and preparation realm, U.K. grocery giant Ocado recently demoed a robotic arm that can pick and pack delicate items, such as fruit. And earlier this month, another food robotics startup, called Chowbotics, raised $5 million. Its first product is “Sally” the salad robot, which is capable of serving up measured quantities of more than 20 different ingredients.

It doesn’t require a gigantic leap of imagination to see where things are going: The robot revolution is very much in full swing.

It’s all still very early days, and many of the technologies outlined above aren’t fully developed yet. But the ingredients are already here for robots to take your pizza order, make it, and deliver it to your house. All it will take is for someone to join the dots between the bots, the kitchen, and the drones, and human involvement in the process will be relegated to little more than a supervisory role.