Having processed nearly three billion messages at Dashbot, we’ve taken an updated look at the most popular, and sometimes not so popular, messages users send to Facebook bots.

Hi and Hello are still the most popular messages. Each month, more than 60 percent of bots receive the message “hi” — in April it was 60.2 percent, March 61.5 percent, February 67.4 percent, and January 65.3 percent.

Despite “hi” being a common message, not all bots support it still. We had a meet-up recently where we entered “hi” into one of the demo bots, and the response was “Sorry, not sure what you mean.”

Adding support for these common messages can make your bot more engaging and increase its overall usage. 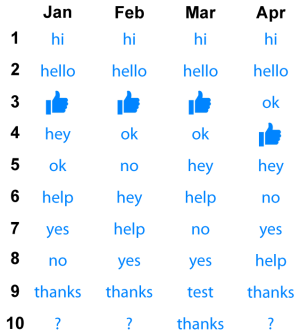 Stop — in the name of bots

Just as important as the top common messages, developers should consider implementing support for other key messages — “help” and “stop,” for example.

Chatbots are still a relatively new medium, so some users don’t know how to use the bot or what a particular bot does. A response to a cry for help can be… helpful.

“Stop” is another important message to consider supporting, especially if your bot sends a lot of broadcast messages. On average, more than 21 percent of Facebook bots receive this message each month.

Adding support for “stop” can be the difference between a blocked user and a retained one. One of our customers, sports score broadcaster Machaao, found users would block their bot when their teams were doing poorly. The company would then have to pay advertising costs to reacquire these users. It added a “mute” functionality, similar to stop, that enabled users to temporarily block the messages without actually blocking the bot.

Well, there comes a time when even a bot has a rough day.

One of the interesting aspects of conversational interfaces is that not only will users tell the bot what they want from it, they will tell it what they think of it afterwards, which sometimes isn’t too pleasant.

It turns out, on average about 14 percent of Facebook bots receive the message “f* you” each month.

This could be an opportunity to respond with a fun animated GIF, a picture of a cute cat, or perhaps a bar of soap…

What trumps bots? Out of curiosity, we took a look at how many bots receive messages about Donald Trump. It turns out about 11.7 percent of Facebook bots.

We looked at the same messages for Slack bots. In about 21.5 percent of Slack bots, users mention Trump, compared to 13.7 percent for Obama and 9.9 percent for Clinton. The message count difference is similar to Facebook — there are 5.7 times more messages containing Trump than Obama, and 8.4 times more Trump messages than Clinton.

To end on a more fun note, let’s look at the most common stickers so far this year.

As we’ve mentioned before, it’s important to look at all the different types of messages users are sending. These aren’t just images — they convey feelings and emotions your users are communicating to your bot. By adding support for these, you can create a personality for your bot and increase user engagement. 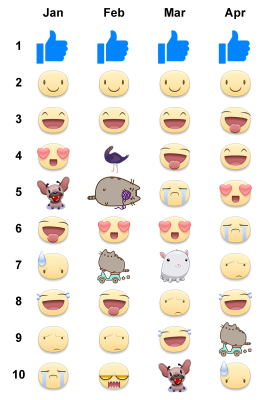