As predicted, Tesla discussed its car lineup’s forthcoming self-driving features during an “Autonomy Day” keynote ahead of its Q1 2019 earnings call later this week. Full Self-Driving (FSD) computer (previously Autopilot Hardware 3.0) — which the Palo Alto company claims is the “world’s most advanced computer for autonomous driving” — is substantially improved over the current-gen Hardware 2.5, according to Telsa chip architect Pete Bannon.

The new Samsung-manufactured chipset, which squeezes into the top part of Tesla vehicles’ glove compartments, features over 144 tera operations per second (TOPS) of neural network performance. (That’s compared with Nvidia’s Drive Xavier’s theoretical performance of 21 TOPS.) It’s got a batch size of one — as soon as an image shows up, it processes it immediately — and it packs two fully independent packages, each with their own with DRAM memory, flash storage chips, and power supplies.

“The [packages] boot up and run their own operating systems,” Bannon said. “The two machines exchange … independent version[s] of [driving] plans and make sure they’re the same, and assuming that they agree, they act and drive the car.”

That makes them highly redundant, Tesla CEO Elon Musk said. “Any part of this could fail, and the car will keep driving,” he added. 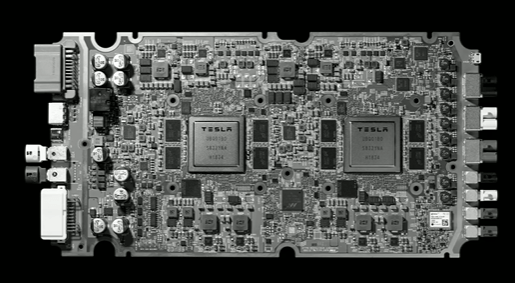 Above: The insides of Tesla’s Full Self-Driving computer.

The aforementioned FSD computers are built on a 14-nanometer FinFET CMOS process and measure 260 millimeters squared, with 6 billion transistors and 250 million logic gates. Their LPDDR4 RAM modules (running at 4,266 gigabits per second) boast a peak bandwidth of 68 GB/s, and the integrated image signal processors — which have 24-bit pipelines and support both advanced tone mapping and advanced noise reduction — can perform operations on up to 1 gigapixels per second.

There’s two neural network accelerators in tow, both of which are clocked at 2GHz, have a 32MB of SRAM memory and 96 x 96 multiple and add arrays, and can process up to 1TB of data per second and perform 36 TOPS (72 TOPS total). Other on-chip components include a 1GHz graphics chip that supports both 32-bit and 64-bit floating point operations and a dozen Arm A72 64-bit CPUs clocked at 2.2GHz that deliver “two and a half times the performance of the current solution,” according to Bannon.

Additionally, there’s a security chip that ensures the system only runs code cryptographically signed by Tesla, and a dedicated H.265 video encoder. 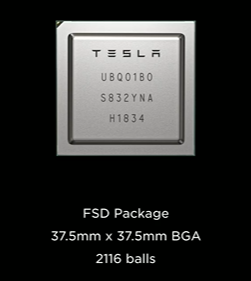 Above: One of the system-on-chips built into Tesla’s Autopilot 3.0 Hardware.

So what’s that mean in real-world terms? Bannon says it translates to about 1.25 times improved power consumption and 80% reduced cost overall compared to previous-gen hardware. (The FSDs suck down about 250 watts per mile, Musk said.) Perhaps more impressively, the FSD computer was able to process 2,300 frames per second in an internal Tesla benchmark — up from Hardware 2.5’s 110 frames.

Full production of production-quality chip parts began in July 2018, and Telsa started retrofitting employee cars with FSD computers in December 2018. Last March, the company began shipping the computer in S and X, and it started building it into Model 3 cars in April.

Tesla offers two Autopilot packages for the Model S, Model X, and Model 3 in most regions: Autopilot, which starts at $3,000 ($4,000 if purchased as an upgrade) and enables features like autosteering and traffic-aware cruise control, and the $5,000 ($8,000 if purchased as an upgrade — $3,000 for the base package on top of the $5,000 upgrade fee) Full Self-Driving Capability, which adds summon, auto parking, and more.

Tesla previously announced that later this year, cars with Full Self-Driving Capability will gain the ability to “automatic[ally] driving on city streets” and “recognize and respond to traffic lights and stop signs.” And it says that in the future, there won’t be one Autopilot mode, necessarily. Tesla cars will offer user-selectable “aggressive” autonomous driving modes.

Tesla has long asserted that Autopilot improves driver safety. In a safety report published last October, it said that Q3 2018 saw one accident or “crash-like” event — near miss — for every 3.34 million Autopilot miles, versus one for every 1.92 million miles driven by humans with Autopilot disabled. That’s compared to the national average of one crash per 492,000 miles, according to the National Highway Traffic Safety Administration (NHTSA).

Tesla VP of engineering Stuart Bowers said that Tesla cars running Autopilot have made over 9 million lane changes and that collectively, Autopilot has driven 80 million miles to date.

“Tesla is making significant progress in the development of its autonomous driving software and hardware, including our FSD (full self-driving) computer, which is currently in production and which will enable full-self driving via future over-the-air software updates,” the company said in a press release.

In recent months, Telsa has ramped up internal recruiting for tests of its full self-driving system. Employees who opt into the pilot get free Autopilot upgrades with new purchases at no additional charge.

“We have 425,000 cars with this hardware … providing data,” Musk said. “A year from now, over a million cars will be full self-driving everything.”