After processing over 7 billion messages at Dashbot, we took a deeper look into the languages with which users communicate. As we’ve mentioned before, it’s important to look at the messages users are sending to your chatbots. The beauty of conversational interfaces is that users say exactly what they want from the bot — and what they think of it afterwards. Examining the messages and taking action on them can help improve the engagement of your chatbot.

In the past, we looked at top messages across all Facebook bots. However, chatbots are developed and used by people all over the world. Users can come from anywhere and say anything, including in their native language. So we took a closer look at messages based on language.

How do you say…

We looked at the most common languages in Facebook bots based on the percentage of bots having users with the particular language setting. The following are the top languages in order. 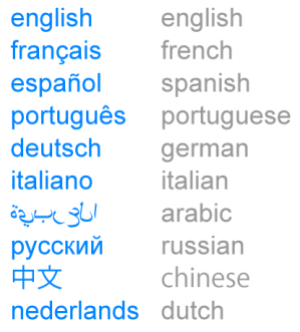 English is by far the most common language – about 90 percent of bots have some English-preferring users. Looking across all bots, on average about 68 percent of a bot’s users are English speakers. The percentage of users based on language depends on the bot, as some bots are targeting a particular language or region. 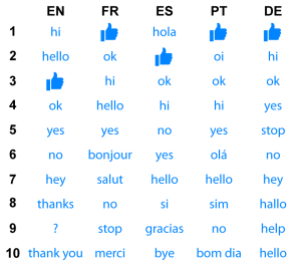 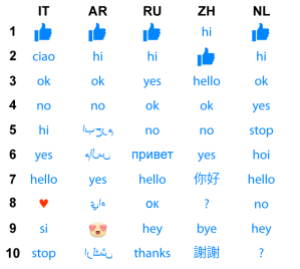 We also see some of the other common English words in the native language — like “شكرا” is “thank” in Arabic and “謝謝” is “thank you” in Chinese. “Sí/sì” is “yes” in Spanish and Italian, and “sim” is “yes” in Portuguese. “Merci” and “gracias” are “thank you” in French and Spanish respectively.

Users communicate with more than just words. Stickers are an additional means to communicate feelings and emotions. They are quite popular around the world among people who use various languages.

The most common stickers across all Facebook bots in May and June are below.

We also looked at stickers used across different languages.

Love is a common theme regardless of language. It’s even more pronounced in Italian — five of the top 10 stickers are love-related. Looking back at the common messages overall, the heart character is also pretty popular in Italian — apparently Italians love to love! 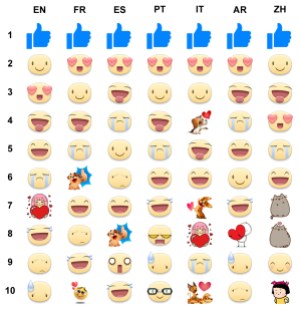 If you’re building a chatbot, it’s important to look at all the metrics, including the individual messages users are sending. It’s information you can use to provide more effective responses to users, and in the way users like to communicate.