Millions of people who played The Last of Us Part II saw a strong Asian-American male character in Jesse, voiced by actor Stephen Chang.

Jesse is a badass scout and zombie slayer who accompanies protagonist Ellie on her quest for revenge, and we get to know him as a strong, loyal, and kind character — before developer Naughty Dog’s story unceremoniously kills him off. His contribution made an impression on me, as I have rarely seen Asian Americans playing such major roles in video games. The Last of Us Part II is full of diverse characters at a time when so many other games are noticeably not.

Now Chang is playing a role in Artificial, a new kind of television show that airs on Twitch. It’s a remotely produced sci-fi series that deals with the boundaries of humanity and artificial intelligence. What’s different about it is that the audience gets to vote through live polls to determine which characters will remain on the show and what they will do. If the audience votes for one big plot twist, reams of alternative scripts wind up on the cutting-room floor. The audience can also control the tone of the music.

Chang, who has played the character Sebastian in the second and current third seasons, said he loves the challenge of this kind of improvisational work. We recently had an opportunity to talk about the new medium and his prominent role in The Last of Us Part II. 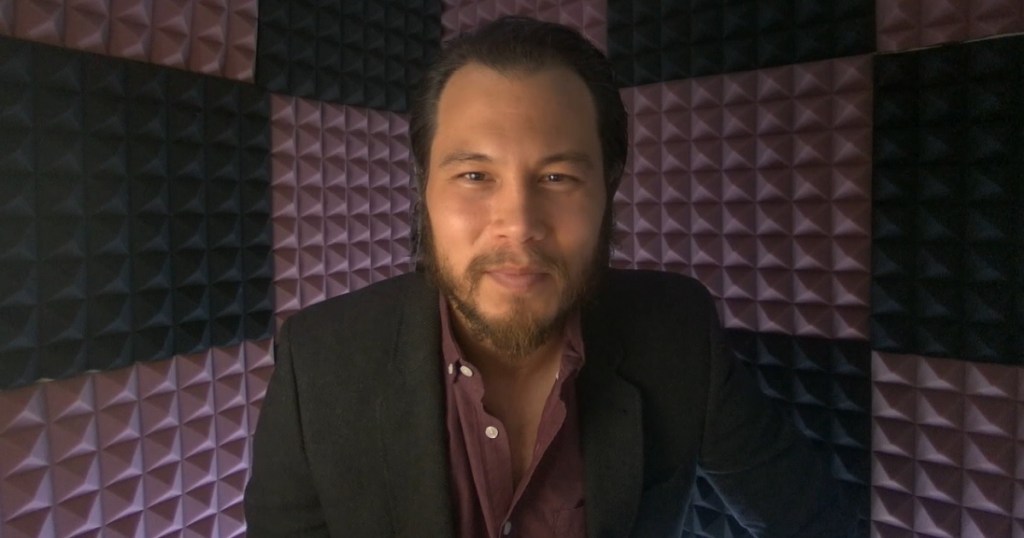 GamesBeat: I played through The Last of Us Part II by myself, and then I played it through a second time with my daughter. That was quite an experience. I was very proud to see the character you portrayed in Jesse there. It was very interesting to see such a prominent role for an Asian American in one of the best games of the year. Congratulations on that.

GamesBeat: How did you feel about the role yourself? Did you feel like it was ground-breaking for you?

Chang: No, at the time I didn’t really think much of it. I was just trying not to fuck up and get fired. But looking back at it, it was definitely an honor. I was just telling someone that — I give the credit to Neil and the writing team at Naughty Dog for venturing out and portraying him this way. They have control over what they want to put out there. I’m maybe just the vessel that it came through. But they had the foresight, the knowledge, the courage to take it there. I give them a lot of credit. I’m just reaping the rewards of what they did.

GamesBeat: I might call you Jesse in this interview because your voice and his image are so tied together in my head.

GamesBeat: There’s something very macho about the character, but also the voice is very distinctively in the same vein. It felt like a match for the character they created.

Chang: I’m sure that’s somehow why they cast me. They knew what they were doing. This is just how I sound. I’m glad you think it sounds macho, because in my head, it sometimes doesn’t sound very macho. I appreciate it.

GamesBeat: Your accent sounds very Southern. I don’t know where you’re from.

Chang: Yeah, it’s weird. I’m just from the [San Francisco] Bay Area, but I’ve got some — I tell people in a past lifetime maybe I was from the South, and it’s still stuck in my head.

GamesBeat: I did feel like it was sad you were denied a proper long and drawn-out death scene.

Chang: You know, to answer that, though — I’ve done a death scene before. It ain’t fun. Shoot me in the head as many times as you want. It’s much easier to act just getting shot in the head and dying rather than having to do a long, drawn-out death. I’ll take that any day.

GamesBeat: Did the role also get you a lot of attention? Did it open some doors for you? Or was that already going for you?

Chang: I don’t know — I’m sure it has. It’s not like someone called me up and said, “Hey, you’re booked in the next thing.” It hasn’t opened that kind of door. But with this kind of — I feel like, with acting, I’m still learning. But definitely being in a project like this, I can only see it as being an attribute to your career, a stepping stone to something else. Honestly, I’d just be honored to work with Naughty Dog and Neil again on anything, because it was such a great experience.

GamesBeat: Maybe Jesse had a twin brother or something.

Chang: Yeah, maybe we can do the origin story.

GamesBeat: Artificial sounds like it has been going on for quite a long time. I didn’t realize it was so interesting. How long ago did you get involved?

Chang: I was in season two, which was last year. I was not in season one. Last year was the same dynamic, where it’s an audience-driven show. The audience chooses where they want the storylines to go, which was pretty bizarre for me as an actor because you have to learn two different scripts at times. You have to go with the flow of where it’s going, and it’s live. This year it just got put on steroids. It’s two hours instead of one hour, with a bigger cast, remote locations. There are so many moving parts in this season, but still keeping the same dynamic that’s driven the show. But it’s amazing. It’s a ground-breaking experience. I’ve never been a part of anything like it. 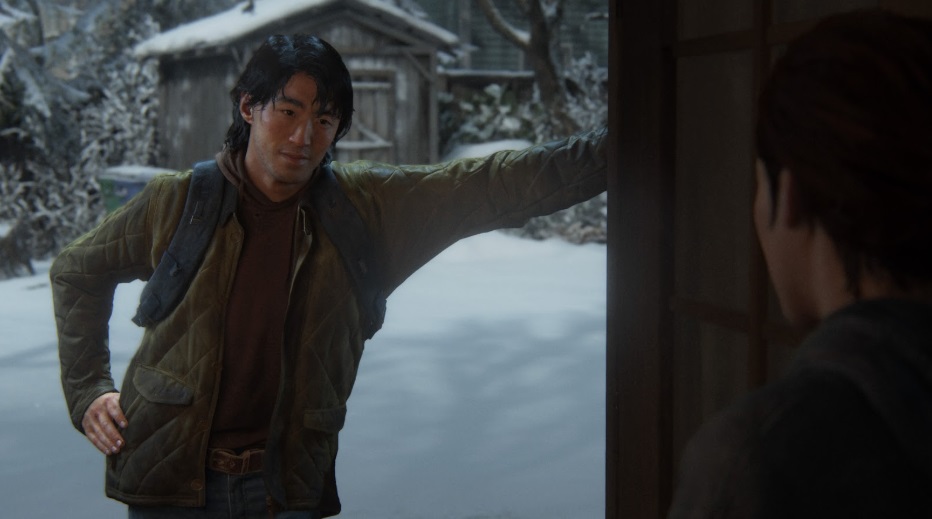 Above: Jesse is a powerful character in The Last of Us Part II.

Chang: It’s always live. It’s stressful, man, but it’s live. Two hours, live. You’re on a high wire. We’re coming to the end of this season. There are two more live episodes. This year, I forget, but I think it’s been 12 episodes, two hours apiece, all live. I can’t believe the writers. They have to write every week, and they don’t know where the story’s going, because the audience is making the choices. It’s a labor of love, this project.

GamesBeat: How do you think of your character?

Chang: I think he’s the hero. I think he saves the day. But everyone calls me a villain, so I don’t know. Maybe I’ve got my head in the clouds. But he’s fun. He’s a very over-the-top, flamboyant guy. He’s a fun character to play. I don’t usually get opportunities to play characters like him.

GamesBeat: With the branching storylines, that sounds pretty stressful. You don’t know exactly which lines you’re going to have to deliver.

Chang: Extremely stressful! But rewarding, I’ll say it like that. When you pull it off you think, “Damn, that’s amazing. I can’t believe we did it.”

GamesBeat: Are you sad about the lines that get left behind when you go down a different branch?

Chang: I’m just happy to get through the show, so I don’t mind, but I’m sure — there was one scene with one of the main actors, and they had a trial. He was either going to be guilty or innocent. If he was guilty, he was essentially going to jail, so he’s done. He’s off the show. He got voted innocent, but he had to be prepared for whatever the audience chose. There was a beautiful scene written in case he was guilty, his farewell to his daughter, and now no one will ever get to see that. But I saw it! It was beautiful.

GamesBeat: Do you have to play to the crowd at all if you want to get them to vote the way you’d like them to?

Chang: I guess you could. As I say, I’m just trying to remember my lines, so I don’t have a lot of time to schmooze the audience. Maybe some of the other actors are doing that on the side, and that’s how they’re winning all these polls.

GamesBeat: How much preparation goes into those two hours? I suppose you have to go through a lot of rewriting as this goes on. Do you have to contribute to this constantly changing script?

Chang: You definitely have to be flexible. The prep, I would say — there’s a lot of prep. We do rehearsals all day on Tuesday. We rehearse right up until the show on Thursday before we go live. There’s a lot of prep work going into it. It’s a grind. But oddly enough, it feels second nature by now. Okay, this is what we do. When the live comes, you just roll with it. You’re not going to be perfect, but you go with the flow.

GamesBeat: Do you like this theme around AI and science fiction?

Chang: Yeah, I think it’s fascinating. They’re asking a lot of questions that are things people will ask in the future when AI becomes even more prominent. It’s interesting. I feel like this trial that happened on the show, we were joking about this, but it’s probably going to happen someday. A robot is going to kill someone, and who’s guilty of that? I don’t know, but these are some of the questions we’re asking. It’s fascinating. It’s a moral debate. I like it.

GamesBeat: What’s your acting career been like as an Asian American?

Chang: You know, I wish I could say it was something amazing, that I’m some kind of ground-breaker, but I’m just trying to get jobs when I can. I go out and audition like an actor of any ethnicity or background. You just try to work your way up the food chain. It’s a grind, just trying to get jobs. You’re basically freelance. You audition and you try to get one thing. You get a lot of nos, a lot of rejections, so you gotta get good at that. I wish I could say I was an overnight success story, but it’s hard work, like most things in life.

GamesBeat: I felt like if you summed up what we were exposed to in The Last of Us Part II, the cast really was amazing. There was so much diversity in it for a video game, even among the villains. You found these pretty ordinary folks from different backgrounds that you’re sneaking up behind.

Chang: It’s a testament to Naughty Dog, to Neil and his whole team. That was their vision. Again, I’m honored to be a part of it.

GamesBeat: It’s interesting that you’re out on the leading edge in a couple of places here. Different kinds of acting that hasn’t really happened before.

GamesBeat: Do you like the sort of acting that’s a part of Artificial, or would you rather do more prescripted, prewritten things?