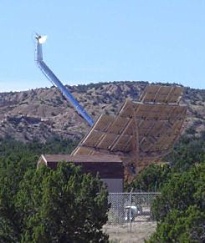 Almost everyone knows that solar cells and solar thermal, both of which are used to convert the sun’s rays directly to energy, are hot areas for investment right now. A third, related branch I’m seeing increasingly of late is using sunlight to create hydrogen, an alternative fuel that many have proposed as a gasoline replacement.

The latest investment is into a stealthy New Mexico-based company called Los Alamos Renewable Energy, which will soon be known as Sundrop Fuels. The company has gotten a $20 million investment, led by a “very prominent and very highly regarded Silicon Valley-based firm”, according to the New Mexico Business Journal, along with a local VC firm called Sun Mountain Capital. (The unnamed firm could well be Khosla Ventures, which recently invested in a similar, nearby firm called Infinia.)

Sundrop uses a process it called Solar Reduction of Carbon Dioxide, or Solarec, to break down the greenhouse gas CO2 into its constituent parts. In a nutshell, Solarec uses mirrors to focus sunlight, just as solar thermal processes do.

However, instead of heating up water, Solarec focuses on CO2, heating it up enough to make the molecule split. One of the byproducts, carbon monoxide, is then combined with water to make hydrogen. The waste heat is converted to electricity, and the process can also be used to make methanol or desalinate water. Sundrop has taken down its homepage, apparently to go into stealth, but a cached version of its page explaining possible applications can be seen here, and a much longer presentation on the process is available through the National Renewable Energy Laboratory.

According to the presentation, Sundrop’s process could be a great alternative to solar thermal, as it claims to generate electricity for 7-8 cents per kilowatt hour. And incidentally, using CO2 (the most-named culprit in global warming) also serves as a great PR move that could result in subsidies, even if the amounts of CO2 recycled aren’t remotely large enough to put a dent in the atmospheric levels.

However, Sundrop isn’t the only company working on hydrogen production with sunlight. Another we recently mentioned is Nanoptek, which runs electricity through water to create hydrogen; it got a $4.7 million investment. There’s a Penn State project to do more or less the same thing that’s still in development, not having reached a good enough level of efficiency yet. Then there’s an oddball project called the Interstate Traveler Hydrogen Super Highway that may be built in Michigan.

Even processes that aren’t as economical as Sundrop claims to be could be viable investments, due to the solar hydogen array’s ability to produce either electricity or a useful fuel outside of an electrical grid — think developing nations and remote locales.

Below is a visual explanation of the Solarec process, courtesy of the NREL report.