Have you ever had an encounter with someone at a bar or party who insisted on getting your phone number? Do you dread receiving the follow-up text message? Burner has created a chatbot that allows you to easily “ghost” unwanted people using one of its disposable phone numbers. 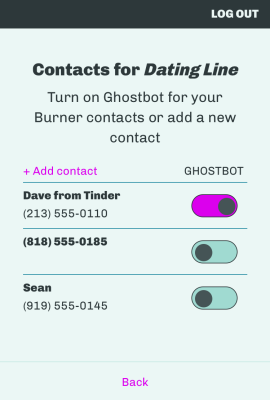 Above: How to ‘ghost’ someone within Burner.

Alongside Voxable, Burner has built Ghostbot, a smart, free utility that uses artificial intelligence to remove “unwanted, aggressive, and even sexually harassing texts.” To use this chatbot, select a Burner number for dating or social purposes, and when you want to ghost someone, simply enter their number into the system. When that individual texts you, they’ll interact with a bot that uses Natural Language Processing (NLP) to reply with a scripted response.

Burner cofounder Will Carter explained in a blog post that Ghostbot is built atop API.ai, which enables it to understand certain types of intent (and which is a continually learning program). “Ghostbot can determine when a text is a ‘let’s do something’ invitation, a ‘booty call’, a pick-up line, a proclamation, or a lewd comment…” he wrote. And this bot’s responses sound anything but robotic, as and the company promises it’ll feature random intervals along with conversational and funny language so the person being ghosted will think they’re interacting with a human being.

Ghostbot is an example that Burner hopes will showcase the power of its offering, especially now that it has also unveiled support for inbound webhooks. With this developer tool, third-party applications will be able to push text messages, doctor recommendations, restaurant listings, subscriptions, alerts, and more to Burner numbers. The company has now come full circle, as this offering complements its outbound webhooks (which were launched in November) and its native integrations with Evernote, Slack, Dropbox, and SoundCloud.

Webhooks are simple versions of Application Program Interfaces (APIs) that companies release to enable integration with developer apps. When you want an application to pass information to another, the first one submits a POST command to a web address with the requested information. The second app has been programmed to always know what to do with that data.

“Ghostbot is an example of what can be done,” said Burner CEO Greg Cohn. “It enables a developer to listen selectively to threads, and they can do as much intelligence as they want in terms of reply.” He suggests thinking of Ghostbot as a proof-of-concept application and invites developers to take a look at Burner’s service and build their own agent-style app on it.

“We think Ghostbot is just a small taste of what’s possible when intelligent agents are embedded into smarter communication tools,” Carter wrote.