The Christmas Spectacular starring the Radio City Rockettes — an annual holiday stage show presented at Radio City Music Hall in New York City — began one year after the Music Hall’s opening night in 1933, which featured the Missouri Rockets dance troupe out of St. Louis. (They’d later move their base of operations to New York City, where they were rechristened the Rockettes after a multi-year stint at the Roxy Theater on Broadway.) What was originally a two-week, 30-minute performance featuring an overture, a ballet, and a handful of vignettes expanded into a 90-minute extravaganza complete with real-life animals, a 36-person cast, 1,100 costumes, and 11 digital projectors that’s been viewed by more than 75 million people. And this year will mark the addition of something new to the mix: more than 100 specially designed Intel drones choreographed over the stage.

Intel says it’s the first time its Shooting Star Mini drones have been incorporated into a theatrical indoor performance, and it claims it’ll be the world’s largest interior drone show.

“We are constantly exploring new venues for Intel’s drone light shows. It is an honor to partner with Radio City Music Hall to integrate Intel’s innovative technology into the iconic Christmas Spectacular,” said Natalie Cheung, general manager of Intel’s drone light shows. “We customize our light show animations for each venue and create performances with stunning visuals powered by technology that can produce billions of color combinations. Weaving Intel drones into this classic holiday tradition is something we hope the audience remembers for a lifetime.”

In the final scene of this year’s production, the Shooting Star Mini drones — representing Christmas lights, appropriately — will create various images and animations synchronized to music and lighting effects. Their movement and flight path will interact with digital projections designed by Obscura Digital, a San Francisco creative studio specializing in interactive art, to create holiday-themed silhouettes. 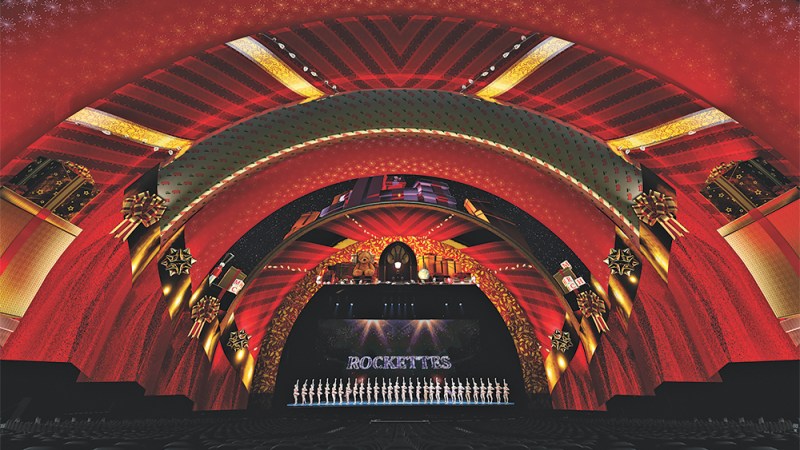 It’s not the first time Intel’s drones have stolen the spotlight.

In November 2016, 500 of them were used in a light show to set the Guinness World Record (since broken) for the “Most Unmanned Aerial Vehicles (UAVs) airborne simultaneously,” and they took center stage during the Super Bowl LI halftime performance starring Lady Gaga in 2017, forming an American flag in the sky. Perhaps the most impressive display was earlier this year during the 2018 Winter Olympics opening ceremony, when a flying swarm of 1,218 Shooting Star drones animated snowboarders, skiers, and the iconic Olympic rings. (To date, it’s the largest drone show in history.)

“From the technology side, flying [hundreds of] drones is about control theory,”  Anil Nanduri, general manager of Intel’s drone group, told VentureBeat in an interview last year. “How do you fly these without having them collide into each other? … We completely automated the interface to take that and program it into what you can call the drone flight line. All that is automated. We built a whole software stack for it, including being able to simulate in advance. It’s the end-to-end experience in terms of how we can operationalize something like this, not just showing a one-time demonstration.”

Be that as it may, the Christmas Spectacular gig looks to be more grueling than the one-off appearances Intel’s drones have made previously. About 200 shows are scheduled for this season, which works out to more than 30 shows a week. Some days, the Rockettes will perform more than six times back to back.

Victoria Parker, executive vice president of productions at the Madison Square Garden Company, says the lightweight Styrofoam drones are up to the task. Their LEDs — which can produce more than 4 billion color combinations — are designed to be controlled by a single computer and operator, and onboard algorithms control the choreography, optimize the flight path, and locate the drones in space without the need for GPS.

The Shooting Star Mini drones made their debut in January at the Consumer Electronics Show, where they flew over the heads of attendees during Intel’s keynote.

“Intel’s innovative technology and unique expertise [will help] propel our ambitious vision into reality …” Parker said. “The addition of Intel, the leader in the drone space, to our powerhouse creative team alongside … Obscura Digital, ensures that Radio City and the Christmas Spectacular will continue to push technological and artistic boundaries while maintaining the heart of the production — tradition.”