Toyota on Wednesday unveiled the next concept car it’s working on, called the Concept-i. Jumping into the autonomous vehicle space, the car maker doesn’t envision a system to let you get to your destination hands-free, but rather one that knows not only your route, but also driving patterns, schedules, emotion, and other data points.

The Concept-i is expected to begin on-road evaluations within “the next few years” in Japan.

In a statement, Toyota explained that the philosophy underlying this futuristic vehicle, centered around wanting it to be warm, welcoming, and fun. To accomplish this, the manufacturer opted to incorporate artificial intelligence (AI) to see if the car was able to anticipate the driver’s needs and improve the overall experience. 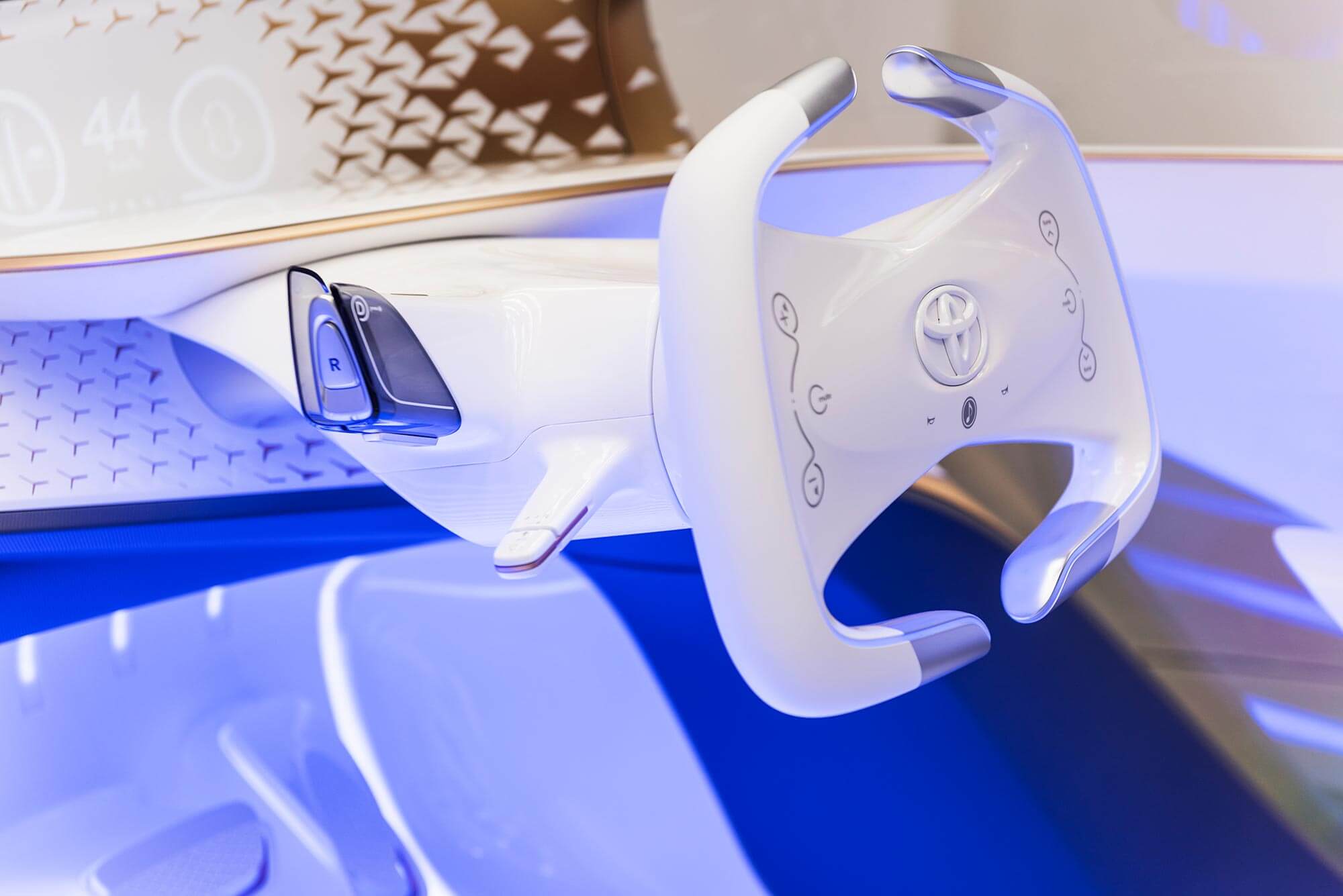 Above: A rendering showing the interior and steering wheel of Toyota’s new concept car, the Concept-i.

Toyota believes that the driver-vehicle relationship should be one that’s “meaningful and human,” which is why its AI, dubbed “Yui,” promises to process numerous signals to make getting around easier, such as driving patterns, emotion, and when and where you go. The vehicle also possesses other technology to heighten safety, including recognizing visual and haptic stimuli, monitoring road conditions and your attentiveness, and allowing you to retake the wheel from self-driving mode at any time.

Designed by Toyota’s CALTY design research team in collaboration with the company’s innovation hub, Concept-i certainly doesn’t look like a vehicle you would currently see on the roads. Beyond having a smarter computer inside, Toyota has done away with the traditional gauges on the dashboard, opting to use light, sound, and touch to communicate critical information. Colored lights in the foot wells will indicate whether the Concept-i is in automated or manual drive, and projectors in the rear dock will tell you if another car is in your blind spot. Yui greets riders at the door through exterior panels, and the rear of the vehicle will display messages about upcoming turns or warning about potential hazards. 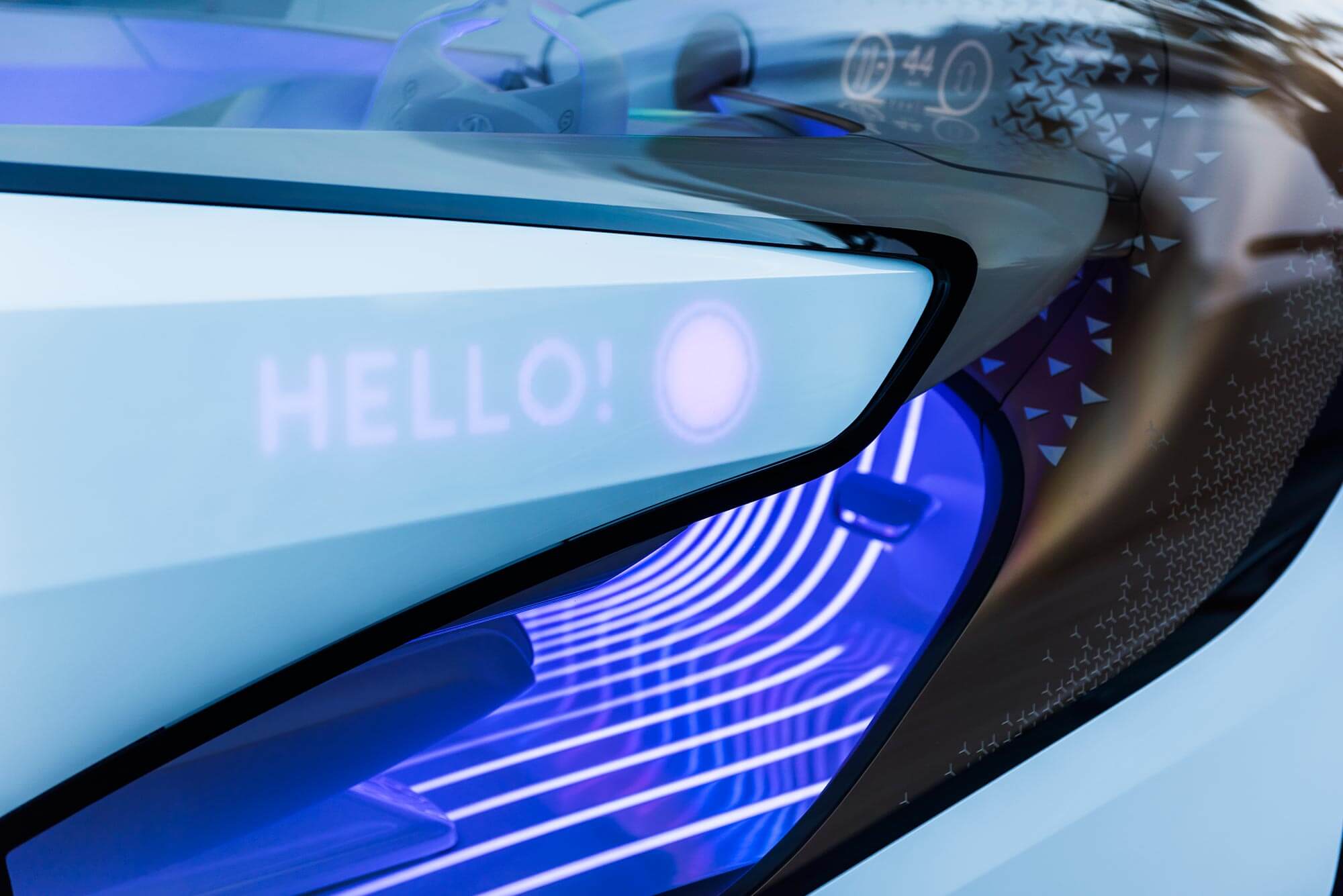 Above: Rendering showing the messages displayed on the rear panel of Toyota’s Concept-i vehicle.

Don’t get too excited about this futuristic-looking car, though — it’s going to be a while before something like it comes to the market for you to own. Toyota hasn’t set a date for mass production, which is smart since there’s still a lot of things to be worked out, such as getting the AI to a point where it won’t endanger people’s lives, run red lights, or freak out in inclement weather. And then there’s the regulatory process that companies need to go through in the U.S. But with Tesla’s autopilot becoming rather mainstream now, it’s feasible to assume that you might get to open up your wallet sometime in the near future.

The push into AI isn’t new for Toyota, as the car maker has been actively researching the technology for a while. It has invested $1 billion over five years to establish a research facility in Silicon Valley to investigate visual computing, machine learning, robotics, human-computer interactions, intelligent systems, decision making, natural language processing, and more. Last year, the company suggested that the public would begin seeing some advances being released over the next five years.

But Toyota isn’t the only one in looking at AI, as it joins Honda, Ford, BMW, and Volkswagen among the major manufacturers. And there are plenty of other companies promising self-driving technology, including Comma.ai, Google, Tesla, Mobileye, Uber, and AImotive.

“At Toyota, we recognize that the important question isn’t whether future vehicles will be equipped with automated or connected technologies,” said Bob Carter, senior vice president of automotive operations for Toyota. “It is the experience of the people who engage with those vehicles. Thanks to Concept-i and the power of artificial intelligence, we think the future is a vehicle that can engage with people in return.”