According to Statista, as of March 2018, around 52% of Americans felt that online news websites regularly reported fake stories in the U.S., with another 34% stating they believed news websites occasionally reported fake stories. Those sentiments aside, sussing out the sources of empirically untrue news online isn’t easy. But a team of researchers from the Berlin Institute of Technology, the University of Valencia, the Federal University of Rio Grande do Sul, and the German Research Centre for Artificial Intelligence recently sought to tackle the problem with a search engine dubbed Untrue News.

It complements work published by University of Indiana researchers concerning Hoaxy, a public search engine for visualizing the spread of claims and fact-checking. In a related study by MIT Computer Science and Artificial Intelligence Laboratory (CSAIL), the coauthors demonstrated AI that could determine whether a source is accurate or politically prejudiced. More recently, CSAIL developed an automated system that can detect false statements of fact; elsewhere, a team from George Washington University, Amazon AWS AI, and startup AdVerifai investigated a machine learning approach to classifying misleading speech.

Untrue News is open source and uses both automated and semi-automated natural language processing techniques to crawl and identify false and misleading news articles. Its AI performs text translation for multiple languages, classification, and the linking of entities like people, organizations, locations, and more, indexing over 64,000 fake stories in Portuguese, German, English, and other languages. 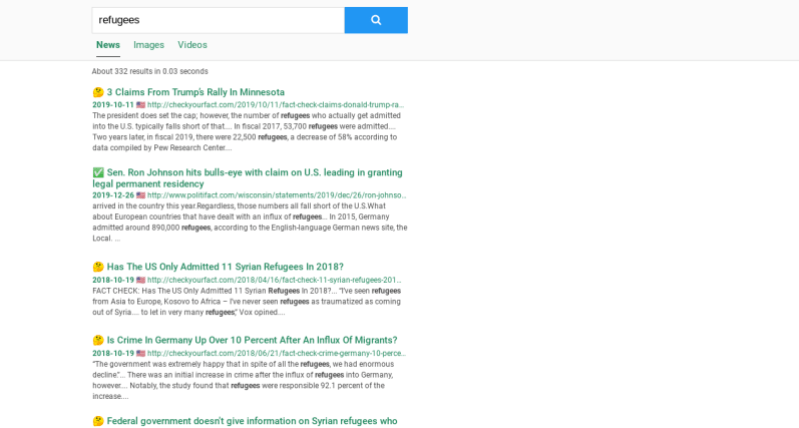 Untrue News combines fake stories around the same subject or person, providing results in users’ own languages. A web crawler taps a template to navigate through websites and extract only publicly available metadata, while a data enrichment module comprising several algorithms — including one that performs entity recognition and document linking to open semantic databases — enriches the content. And for comparison with false stories, Untrue News draws on sources considered trustworthy by the International Fact-Checking Network, the unit of the nonprofit Poynter Institute dedicated to bringing together fact-checkers worldwide.

For each query, Untrue News displays the number of news items found in total, as well as the title of articles by fact-checking agencies, the date of publication, the country in which the news was checked, a link to the original fact, an icon related to the category of trustworthiness, and an excerpt. For instance, news that a Brazilian politician posted about the transfer of 8 million dollars to the Ministry of Education shows a symbol that indicates a partial truth, because the funds were transferred to other ministries as well. 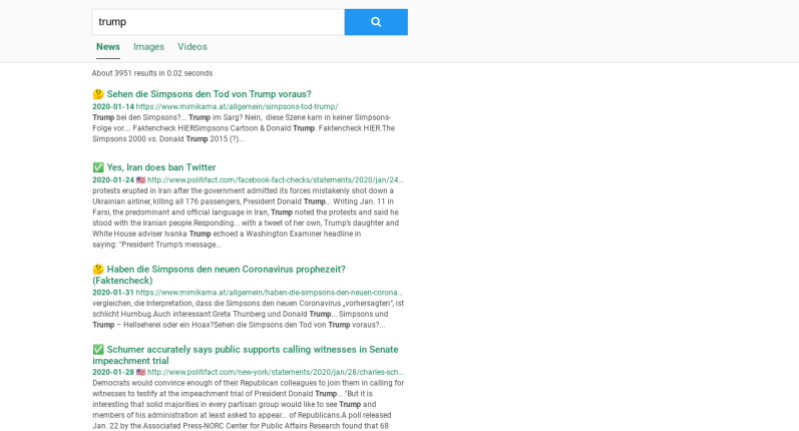 “Building a collaborative, reliable and open-source platform for collective use is the main focus of Untrue News,” wrote the researchers in a paper describing their work. “In a time when rumors and false stories are decisive in building the collective thinking of society, Untrue News presents itself as a platform for fighting disinformation.”