Mobile banking app Varo Money is bringing a bot into its app to act as a financial personal assistant for its customers.

Named Val, the bot will help Varo customers plan emergency savings, set goals, and provide insights that help them keep track of and control their spending. Created by Kasisto, the bot can answer more than 1,000 questions about an individual’s personal finances.

“We’re using a series of reinforcement algorithms that are going to help users make smaller, more informed decisions with their money around optimizing a particular financial outcome. Our initial focus next year is going to be building emergency savings,” CEO Colin Walsh told VentureBeat in a phone interview. “Too many people lack that personal safety net, and if we can make an impact on that and use the bot as a way to think about spending less on certain things in order to save more and create that emergency savings, we think that will be a huge win.”

Varo is focused on acquiring millennial customers first, for the same reasons many of its competitors also target millennials: “They’re going to be much more digitally savvy; the idea of having a mobile-first banking platform is pretty intuitive to them, and I think there’s a lot lower barrier to switching [banks],” Walsh said.

Today, Varo is primarily a debit card and checking account, but the plan is to work with other companies to add several additional services. Varo Money plans to launch for public use in early 2017, Walsh said.

A survey of 250 millennial customers during beta testing found that each person managed their finances with a combination of four to eight different apps.

The mobile bank wants to combine those four to eight apps into one, providing money-saving tips like Mint or Simple, algorithm-based automated savings like Digit (who told VentureBeat earlier this year that it has saved users more than $230 million), and peer-to-peer payments like Venmo or Square Cash.

“Varo can essentially do all of that, so you come to Varo, you open up your bank account, and you can deposit your money, pay your bills, get the debit card, have the algorithms to help you build savings, and have Val interacting with you to give transaction support, as well as beginning to deliver insights [based on personal spending habits], so it really kind of brings it all together,” Walsh said.

In addition to working with Kasisto to make Val, Varo has also partnered with Bancorp to provide Varo customers with checking and savings accounts. Galileo Processing will provide payment and transaction processing services, and Cachet Financial Solutions will provide mobile check deposit.

Services like credit cards, student loan consolidation, or remittances may also be on the way, Walsh said. 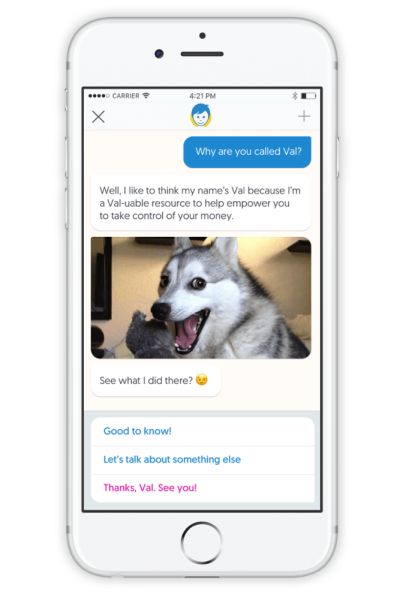 Val is based on Kasisto’s KAI Banking, which was first released in June.

KAI Banking is currently being used by the Royal Bank of Canada and DBS in Singapore, Indian mobile bank Digibank, and soon MasterCard.

A number of fintech solutions have come to life this year that help people save money or track their personal finances, including Trim and Bond.

Bank of America also announced plans this fall to bring bots to their customers starting next year.

Varo Money was created in 2015 and is based in San Francisco. Earlier this year, the company raised $27 million in a funding round led by Warburg Pincus, a private equity firm whose president is former Department of Treasury Secretary Timothy Geithner.