Today during a briefing with members of the media, Waymo head of commercialization for trucking Charlie Jatt outlined the company’s go-to-market plans for Waymo Via, its self-driving delivery division. In the future, Waymo will partner with OEMs and Tier 1 suppliers to equip cloud-based trucks manufactured and sold to the market with its autonomous systems. In addition, Waymo will work with fleets to provide its software services and offer support for things like mapping and remote fleet assistance.

As Waymo transitions to this model, Jatt said that Waymo intends to own and offer its own fleet of trucks — at least in the short term. One of the delivery solutions it’s exploring is a transfer-hub model where, rather than an automated truck covering an entire journey, there will be a mix of an automated portion and a portion involving manually driven, human-manned trucks. Automated vehicle transfer hubs close to highways would handle the switch-off and minimize surface street driving.

In a first step toward this vision, Waymo says it will soon expand testing on roads in New Mexico, Arizona, and Texas along the I-10 corridor between Phoenix and Tuscon, as previously announced. This year Waymo mapped routes between Phoenix, El Paso, Dallas, and Houston and ramped up testing in California on freeways in Mountain View, but the focus for the rest of 2020 will be on the American Southwest. 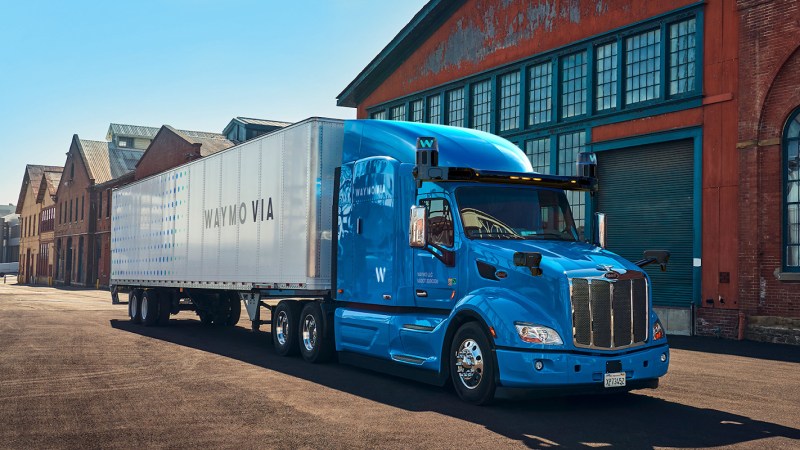 Tests will be primarily along Interstates 10, 20, and 45 and through metropolitan areas like El Paso, Dallas, and Houston. Chrysler Pacifica vans retrofitted with Waymo’s technology stack will map roads ahead of driverless Peterbilt trucks as part of a project known as Husky.

Waymo is also engaged with local delivery under the Waymo Via umbrella, the company reiterated. It currently has two partnerships in the Phoenix area — one with AutoNation and one with UPS. On the AutoNation side, Waymo is performing “hot shot” deliveries where Waymo vehicles travel to certain AutoNation locations and deliver car parts. And on the UPS side, the company is ferrying packages from stores to UPS sorting centers.

Waymo began piloting dedicated goods delivery with class A trucks — 18-wheelers — in 2017. After completing tests in 2018 with real loads from Google datacenters in Atlanta, Waymo began limited testing on roads in the San Francisco Bay Area, Michigan, Arizona, and Georgia, and on Metro Phoenix freeways.

Waymo’s autonomous trucks employ a combination of lidars, radars, and cameras to understand the world around them. They have roughly twice as many sensors as Waymo’s cars to handle the trucks’ unique shape and the occlusions they cause, and they place a greater emphasis on long-length perception (the perception range is somewhere beyond 300 meters). But they use the same compute platform found in the fifth-generation Waymo Driver.

As the pandemic drives unprecedented growth in the logistics and ground transportation market, Aurora, TuSimple, and other rivals are investing increased resources in fully autonomous solutions. They stand to save the logistics and shipping industry $70 billion annually while boosting productivity by 30%; according to a recent study from the Consumer Technology Association, a quarter (26%) of consumers now view autonomous delivery technologies more favorably than before the health crisis.

Besides cost savings, the growth in autonomous trucking has been driven in part by a shortage of human drivers. In 2018, the American Trucking Associates estimated that 50,000 more truckers were needed to close the gap in the U.S., even despite the sidelining of proposed U.S. Transportation Department screenings for sleep apnea.