Josh Tippy is a nurse manager in the neurology unit at Texas Health Dallas. The 23-bed department cares for people who have had a stroke or suffered back, spine, or nerve damage. Tippy was a bedside nurse for seven years, and he knows from his work in both positions that being on your feet all day, giving patients your focus, and other demands can make it easy for nurses to burn out.

A 2017 RNnetwork survey found that nearly half of nurses are considering leaving the profession, and nearly half of all nurses said they feel more overworked now than compared to two years ago, a trend expected to increase in the years ahead as a shortage of nurses continues in the United States as Baby Boomers age and their health care needs grow.

In its first month of operations shadowing nurses and understanding their daily workflow, Moxi has learned to take away soiled linen and bring fresh sheets, plus deliver the handful of supplies every patient needs. All this is welcome, Tippy said, because any pickup of the cognitive load is helpful.

The robot also makes sure there’s water next to the bed.

“At our major med administration times, [Moxi] would have water bedside, so as we’re introducing ourselves and the patient is still getting to know us, rather than us leaving to go get things, we had it all in the room,” Tippy said. “She was really able to help us stop interrupting flow.”

Here’s a quick look at takeaways for nurses and Diligent Robotics following the completion of Moxi’s first weeks of trials with nurses at hospitals in Dallas and Austin. 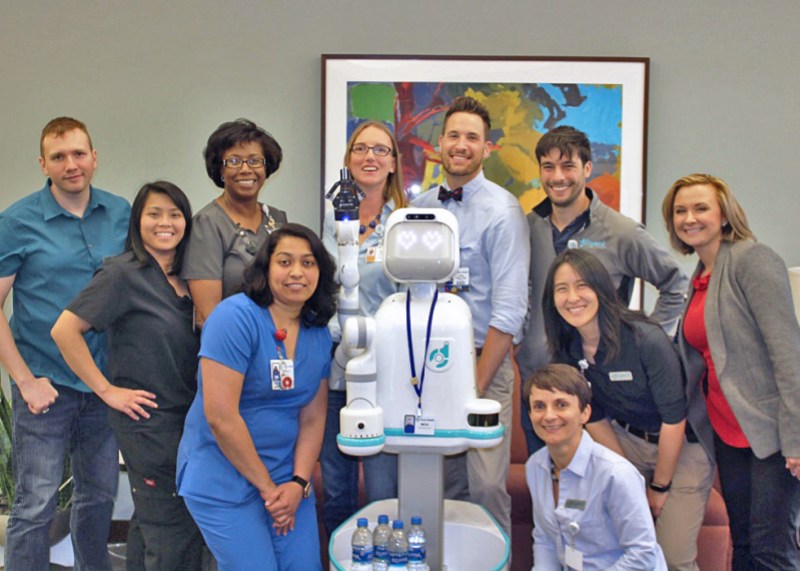 Robots come out at night

Tippy was initially skeptical Moxi would be fast enough to keep up with his nursing unit. He was surprised that many things Moxi did happened without them realizing it, because the robot operated primarily at night and in off-hours when there are fewer people in the building — but also fewer nurses.

To pitch in at night, Moxi took lab specimens to the lab.

“Normally we would have to send our charge nurse, so that’s another nurse off the floor,” Tippy said. “That was one of our biggest saves was Moxi doing that for us.”

Take time to be social, but not too social

Once an hour, Moxi made the rounds to say hello to patients and people in hallways, something Tippy said his primarily older patients seemed to like, as if they were part of the future that’s being made now.

Moxi was created by Diligent Robotics, its prototype a product of University of Texas, Austin. It’s the creation of CEO Dr. Andrea Thomaz, a roboticist and professor who previously ran the Georgia Tech Socially Intelligent Machines Lab.

Moxi can smile and shift its LED eyes and head in the direction of a person talking. It can display heart emoji eyes or rainbow eyes when it wants to celebrate.

However, Thomaz said, Moxi is purposely limited in its ability to enter patient rooms and is not designed to be chatty like Google Assistant or Alexa. Moxi is made to help nurses run errands and complete tasks, and while it takes a bit of time each day for brief social moments, Diligent has made Moxi less social at first to stay on top of the central focus of reducing burnout for nurses.

Bundle supplies to save time

When its telescoping pillar rises to its peak to get items from inside a supply closet, Moxi can stand nearly 6 feet tall. In order to save time, in the Texas trial, the supplies every new hospital attendee needs were packaged in preset boxes for Moxi.

Moxi picked up the boxes with its arm, placed them in a bin at its base, and delivered them to mailboxes outside patient rooms. Moxi does not enter rooms to avoid potential contamination of a space, Thomaz said. Delivering them to the doorway can reduce supply shrinkage, since items that enter a patient room could be tossed out even if they aren’t used, also to avoid potential contamination.

Moxi and the Diligent team worked on delineating time-based tasks, such as removing soiled linens (which must be taken away every day at, say, 11 a.m.), but next on the roadmap is electronic health records integration.

Bringing prepacked boxes to rooms for newly admitted patients in the Neurology Unit at Texas Health Dallas was helpful, but Moxi was unable to deliver supplies to rooms based on a patient’s specific needs. In order to do this, in the future Diligent plans to incorporate more electronic health records.

Providing continuous deidentified information about a patient’s needs or doctor’s orders could mean Moxi would know about supplies needed to carry out a procedure before a nurse does, saving them a trip to the supply closet.

“The main part about EHR integration for Moxi would be the ability to automatically infer support tasks without being explicitly told, and to be able to know the timing of those things more precisely,” Thomaz said. “So if we can see on the report on the electronic health record that rooms 420 and 423 are on feeding tubes, then we know to leave that kit of supplies to do the feeding tube change in the mailbox every day.”

Limit some interactions to humans only

In the first month or so of trials with Moxi, Tippy said they barely scratched the surface of what Moxi was capable of doing. For example, he envisions a time when a robot and nurse could work together to help stroke patients ambulate. The trial also made clear that virtually every health care professional could use some help to reduce their workload, but that some things should only be done by a human.

“Patients need our touch, our interaction,” Tippy said. “That would be the only place I really think a robot probably should stay away from, that aspect. Other than that, I think there’s an endless amount of tasks that can be completed by a robot.”

Moxi is the latest creation to roll out of a university robotics lab and into the real world.

In similar fashion, Mabu is a robot with emotional intelligence that works with patients who have congestive heart failure. Dr. Cory Kidd created Mabu for Catalia Health, which recently got access to the American Heart Association’s knowledge base to provide patients with more helpful information and guidance.

Embodied Robotics was founded by Dr. Maja Matarić, an expert in human-machine interaction, and it is one of the first robotics startups to receive funding from Amazon’s Alexa Fund. Matarić’s work is informed by robots produced by her lab at the University of Southern California that were designed to help stroke survivors in recovery.