Voice, it is often said, is the next big platform. Some reports indicate that roughly half of all U.S. households owned a voice-activated smart speaker by the end of 2018, with global shipments rising as much as 140 percent in at least one quarter year-on-year.

Against that backdrop, a fledgling artificial intelligence (AI) startup is looking to make its mark in the enterprise with a new voice guidance platform designed to help frontline workers go hands-free and carry out manual tasks more effectively.

Founded in Copenhagen back in August, Whispr says it’s setting out to “transform frontline services” using voice technology. To further its mission, the startup today announced a small $750,000 preseed round of funding from Seedcamp, the “Y Combinator of Europe,” with participation from Bose investment arm Bose Ventures, Denmark’s PreSeed Ventures, and Futuristic VC.

In a nutshell, Whispr is an application that “whispers” instructions and expertise into workers’ ears as they do their jobs, from carrying out an aircraft inspection to tidying a hotel room or fixing a car. It’s about ensuring that processes are adhered to correctly, with users able to ask the app questions verbally. So natural language processing (NLP) is key to Whispr’s success.

“We have a platform for ‘processes’ or ‘checklists’ to come alive,” Whispr CEO and cofounder Hugh O’Flanagan told VentureBeat. “We ‘understand’ the words, the patterns, the instructions, and the data to make these better over time.”

It’s worth noting here that Whispr isn’t actually available yet — version 1.0 is landing tomorrow for early access users, with a broader launch expected this summer.

The Whispr platform has three core components. The first is Guide Builder, a desktop-based app used by senior managers and other operational heads to transport their standard operating procedures (SOPs), checklists, manuals, and so on from PDFs and other formats into the Whispr system. Whispr translates these documents to voice guidance, which is then deployed through a dedicated mobile app for frontline workers on Android and iOS devices. 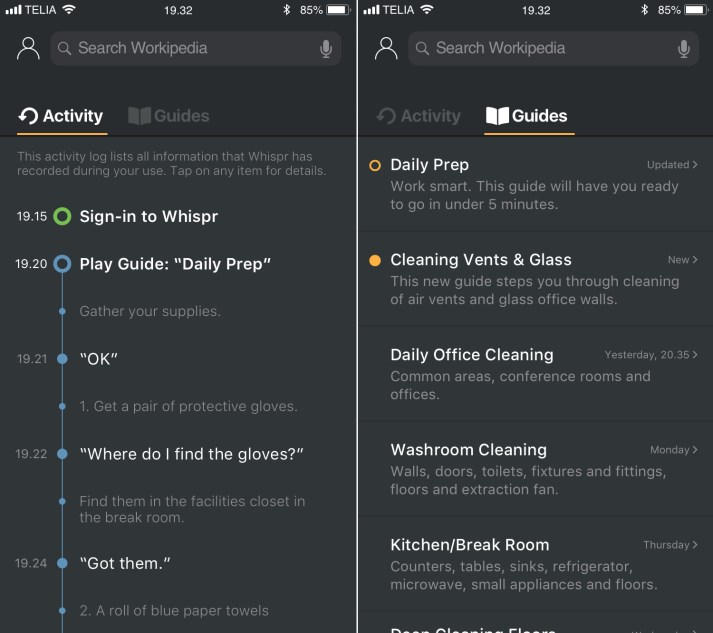 Above: Whispr: App mockup of activities and guides in mobile app

The idea is that workers wear headphones and take instructions as they carry out their duties, confirming verbally to Whispr when they’ve completed one of the steps on the checklist. Users can also ask questions, such as “Where do I find a pair of protective gloves?” or “What room should I clean first?”

For the text-to-speech (TTS) element, Whispr’s using Google’s WaveNet synthetic voices, while all of its automatic speech recognition (ASR) is run on-device, meaning internet is not required for the service to work. 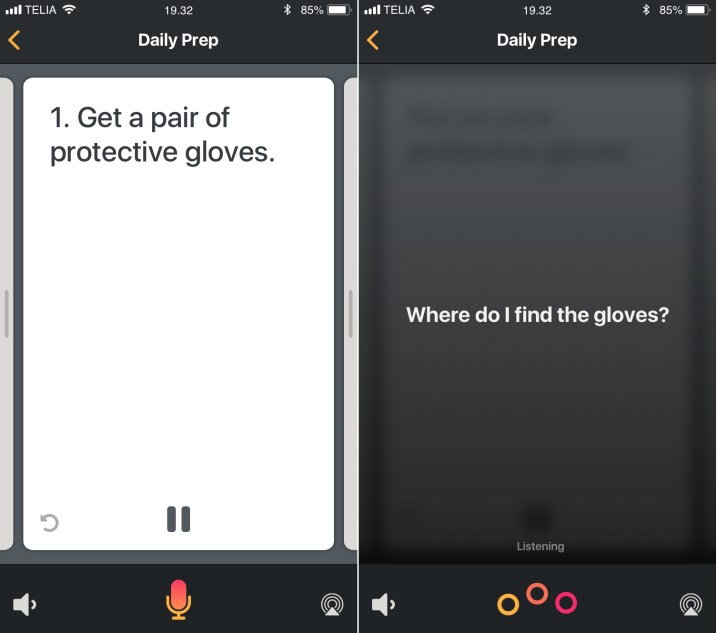 Above: Whispr: App mockup of question being asked

The third key component is the data. Over time, Whispr is able to better understand questions it is asked and figure out where people are getting stuck or whether a particular step is taking too long. It can then use this data to improve the guidance and processes.

Additionally, Whispr will eventually launch an application programming interface (API) so companies can integrate it into their own software. This feels like it could be a better use case for the technology, particularly for big companies that may be more inclined to integrate voice guidance smarts into their own existing apps.

While Whispr is still very much in an embryonic stage, it would be interesting to see its voice guidance platform paired with visual-based technology, such as augmented reality (AR) glasses.

We’re already seeing how Microsoft is using mixed reality apps like Remote Assist to allow technicians and experts to remotely view what frontline workers can see and help them solve problems from afar. It doesn’t take a great leap of imagination to see how visual data could help an AI voice improve its verbal guidance. Whispr told VentureBeat that it is actually working on a beta version of its app for AR headsets for “sensory data collection,” which is where its investment from Bose Ventures comes into play.

While Bose is better known for audio equipment such as headphones and speakers, at SXSW last year it debuted a new audio-focused AR platform and a $50 million fund to invest in startups that develop atop its platform. It has also built its own $200 sunglasses, called Bose Frames, with speakers inside the frame’s arms that can play music via Bluetooth.

Additionally, Bose Frames feature a head motion sensor to determine which direction the wearer is facing, and they can use the paired phone’s GPS to serve up location-specific information. 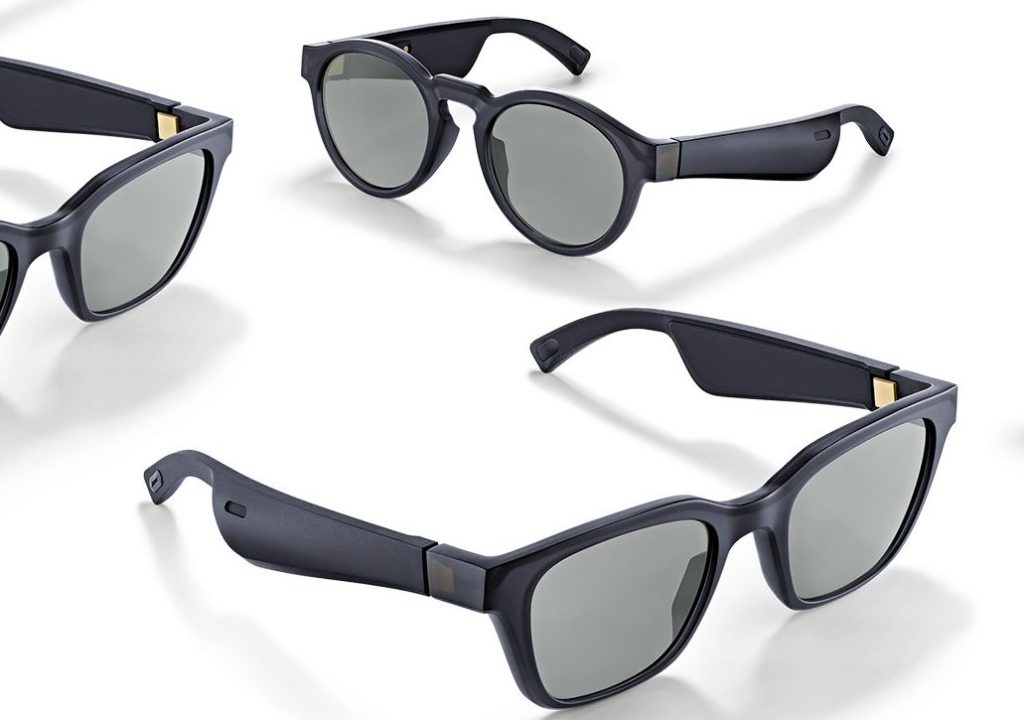 “Bose Ventures seeks out startups like Whispr that are using audio and voice technology in innovative ways, and we are excited about the direction Whispr is heading,” said Steve Romine, managing director at Bose Ventures.

While it’s too early to say how Whispr will leverage its AR app, the startup has some ideas.

“For Whispr, this might mean that a nod of the head is more appropriate than a verbal ‘yes’, and looking in a certain direction may be important for safety,” O’Flanagan said. “There are lots of different uses, but in addition to the voice confirmations it provides yet another layer of data to the worker and the business — data that feeds back into Whispr to make improvements to the process over time.”

In terms of existing real-world use cases, well, Whispr said it’s gearing up to launch a pilot with “one of the world’s leading facilities services companies” in the next month. This will be an opportunity to trial its technology to improve worker on-boarding times, engagement, and retention. Whispr said it’s also in talks with “large aviation businesses” with thousands of frontline workers.

Though its preseed funding is modest in size, the fresh cash injection will help Whispr double its workforce over the next year to 12 employees, who will be based in Copenhagen and Dublin and focus largely on business development.

A number of technologies already exist to help frontline workers. For example, venture-backed Typsy serves up educational videos for those in the hospitality industry, while Expedia-backed Alice aims to help those in the hotel industry communicate with each other. And Crew, which is backed by the likes of Greylock and Sequoia, offers a messaging app aimed at keeping frontline workers in the loop.

But in terms of a distraction-free guidance system that doesn’t tie up a worker’s eyes or hands, Whispr hopes to blaze an early trail.

“For 50 years, there has been virtually no improvement in bringing technology to frontline employees,” O’Flanagan said. “We still haven’t figured out to help them do their jobs better. Whispr is changing that and bringing voice technology to empower the billions of underserved workers. Our technology adapts to humans, not the other way around. We are returning to the original and most natural user interface, which is voice.”