The NBA playoffs started last Saturday, and the Golden State Warriors, the team that again ended the season with the best record in the league, has created a Facebook Messenger bot to act as a personal playoff assistant to Dub Nation fans. The bot helps fans cheer on the Warriors, talk trash to friends and coworkers, and follow the team as it tries to reach the NBA Finals for the third year in a row.

The bot was launched as part of an onstage demonstration at F8, Facebook’s annual developer conference.

The Golden State Warriors bot is made especially for the playoffs and can share live scores and video highlights. Highlight video can be sorted by dunks, 3-point shots (aka splashes), or recap. Video and GIFs the bot shares can then be shared with friends inside Facebook Messenger.

As bots have grown in popularity, the Warriors have thought about how and when to implement a bot, the Warriors’ senior director of digital Jeremy Thum told VentureBeat. This bot is just for the playoffs, but it’s the beginning of the Warriors organization’s exploration of bots, he said.

“As we started thinking about what a bot can do, you can pretty quickly get overwhelmed, but we thought that the playoffs give us a tight enough scope to get something to our fans during a heightened time of interest during what we hope is a long playoff run,” Thum said.

Warriors bot is not an experience entirely guided via buttons, but attempts to take into consideration the sorts of questions fans might ask in natural language. Type “Shop” and you get exclusive playoff gear. Type “GIF” and you can find Warriors-related GIFs. Expect to see more than one dancing Draymond Green GIFs.

The questions the bot cannot answer will be taken into consideration in making the Warriors bot smarter. Once the organization considers its bot smart enough, it may start assisting people at Oracle Arena during the regular season, or help people get acquainted with Chase Center, the Warriors’ new home opening in 2019.

“Long term, obviously this is a test for possible interactivity with fans at Chase Center, but also I feel like this might be the first step in the direction toward voice control [like Alexa or Google Assistant], which we’re also looking into a little bit,” Thum said.

Thum says the bot has a full snack menu and will soon be able to tell you things like where to find food based on where you’re seating. Future versions of the bot may allow you to pay for food or purchase tickets without leaving Facebook Messenger. 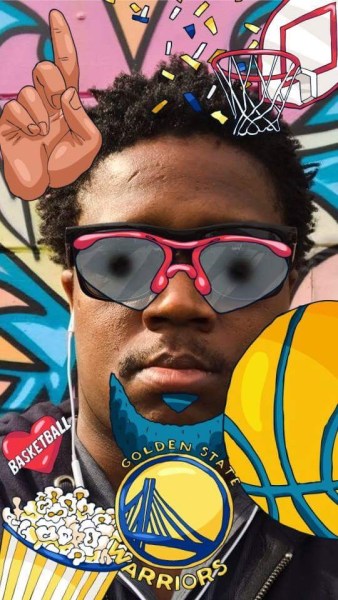 Above: Type “Share game result” after a game and you get a personalized photo built from your Facebook profile photo.

Warriors bot is also able to tell you about things like Oracle Arena’s pet policy and services for people with disabilities.

It’s all about the second screen, said Chatfuel CEO Dmitry Dumik, whose bot-building tool the Warriors used to create the playoff bot. The majority of people watch sports games with a smartphone or second screen, sharing messages with friends as they go along.

“So whenever you watch a game, Messenger bot is not a replacement. It’s an addition. That’s going to help you experience better emotions with your favorite team and friends,” Dumik said.

This is by no means the first time the Warriors have been closely associated with Silicon Valley. Warriors owner Joe Lacob is a partner at venture capital firm Kleiner Perkins Caufield Byers. The team is also known for using tech to monitor shot selection, and players like Andre Iguodala are known investors in startups.

Chatfuel was part of the Winter 2016 batch of the Y Combinator startup accelerator. Its simple bot creation platform has been used by companies like New York Times, BuzzFeed, Adidas, and Uber.

Game 2 of the playoff matchup between the eighth-seeded Portland Trailblazers and top-seeded Golden State Warriors takes place at 7:30 p.m. Wednesday at Oracle Arena in Oakland, California. The Warriors lead the series 1-0.