Messaging is huge, so it’s no wonder more brands are looking to join the conversation. Around 75% of the world’s Internet users use messaging services. In markets like Asia, consumers not only chat with friends and family members, they also connect with businesses, consume content, shop, and get help with products and services.

The mobile messaging ecosystem has evolved well beyond the limits of SMS — and much of this surge in popularity has been driven by millennials. Nearly half of adults aged 18-34 believe that a text message conversation is as valuable as a phone call. But unlike occasional phone calls, the stateless nature of messaging helps maintain a feeling of persistent connection.

This connection can extend to brands as well — as long as they don’t squander the opportunity by viewing it as a one-way street. Industry practices like the ubiquitous “no reply” email address have hurt the credibility of digital B2C communication enough that consumers still reach for the phone to get customer service, despite it being enormously frustrating. Once you get past the hold music, at least you know another human being is listening to you.

Messaging is an area where brands should be going overboard to both establish trust and delight users. But don’t expect AI to take over customer service anytime soon. These bots simply offer another channel to deliver the same information that’s already accessible using mobile apps. 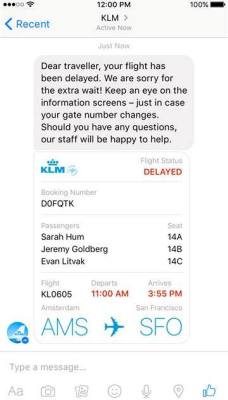 For instance, in March, KLM airlines launched a bot on Facebook Messenger to send passengers flight confirmations and boarding passes. That’s great for travelers who don’t feel like downloading another app, but a new interface isn’t true customer service. For now, bots are relegated to simple tasks like telling you the weather forecast, tracking packages, or checking a balance.

Bots won’t be capable of dealing with the more nuanced situations that customers face on a daily basis for a while. In these cases, emotional intelligence trumps artificial intelligence by a long shot. And companies that lean on bots too quickly could end up tarnishing their brand. Customers aren’t stupid. They know the difference between a helpful innovation and a digital brush-off.

It’s critical to remember that the main reason people have embraced messaging is because of the human being on the other end. With any new engagement channel there’s a temptation to try and automate as much as possible. But we’ve been there before with voice, and we know the results: frustrated customers. Businesses would be wise to tread carefully, keeping bots on a short leash while they learn from human experts. Remember that customers are often reaching out when they already have a problem, and they’ll have a lower tolerance for frustration than they might for a simple entertainment bot.

This isn’t to say bots won’t be able to do more in the future. The time between improvements in AI technology continues to decrease, and likewise, so will the number of scenarios where a human needs to take over to answer basic questions. While Siri hasn’t evolved much since 2011, her creator, Dag Kittlaus, just demoed Viv. With significantly-improved context-awareness, Viv represents a generational leap in conversational AI. Though, in some ways, it just feels like we’re just starting to catch up to what we were promised five years ago. There’s a lot of well-deserved excitement around AI and machine learning right now, but there’s still a wide gap between the hype and the reality.

Brands should be on their best behavior

The massive user bases of messaging platforms combined with the potential for conversational commerce is already proving irresistible to marketers. But the more intimate the technology, the more sensitive consumers are to what they perceive as abuse or spam. Early adopters should look to build trust by offering true value-added services, not aggressive or intrusive marketing messages.

Uber’s partnership with Facebook is a good example. Users can order a car, but they can also leverage the group chat interface to let friends know when they’re on the way. Later this year, Whatsapp will open up to banks and airlines and begin testing tools to let customers communicate with other businesses and organizations. Chinese app WeChat is further ahead than most, offering banking, bill payment, and even dating.

Conversational commerce and mobile messaging has the potential to radically transform the relationship between people and brands, but the main focus should be on making the experience a satisfying and engaging one for the consumer. Businesses are once again learning to go where their customers are, and people are welcoming them for now. To keep it that way, brands should focus on using this engagement opportunity thoughtfully and respectfully, or they risk alienating customers.