BUZZZZZ! THUMP. Down goes another tree in virtual reality. The sole witness of this was the participant in our VR study who used a remote control with haptic feedback to cut the tree. As the participant leaves, our research assistant intentionally spills water. The participant rushes to help — but how many paper towels does she take? After cutting down a tree in VR, participants tend to use fewer paper towels — a small but powerful indicator that VR experiences can impact the empathy of their users and immediately translate to positive real world behavior.

As a research scientist, I studied the power of game psychology in mobile contexts. Advances in computer vision and 3D rendering have brought realistic immersive experiences to the pockets of millions via mobile devices. Embodiment, or the act of choosing an avatar to represent you inside a game can generate powerful feelings of attachment, causes users to bring over characteristics from their virtual character to their physical being. Most important, breakthroughs in augmented and virtual reality gaming have enabled us to increase user empathy through gaming.

Although my Ph.D research was primarily focused on the immersive effects of virtual reality, it was the accessibility of mobile augmented reality that drew me to this space. AR provides equivalent immersive opportunities to virtual reality, but the mobility on phones (no headsets) creates new types of social interaction and can produce high visual variability; no two rounds of gameplay look alike due to varied AR objects and physical world settings.

In this article I will focus on casual gamers, individuals who prioritize entertainment and shorter term games. (In contrast, a ‘heavy gamer’ is an individual who is able to turn gaming into a profession or lifestyle and monetize off their skill in gameplay). Gamers today come in all genders and ages. They are constantly seeking fresh ways to interact with friends and quell boredom. Casual gamers want to be topical — creating and sharing content is important to them.

Within the category of casual gamers, researchers see four quadrants or “types”. 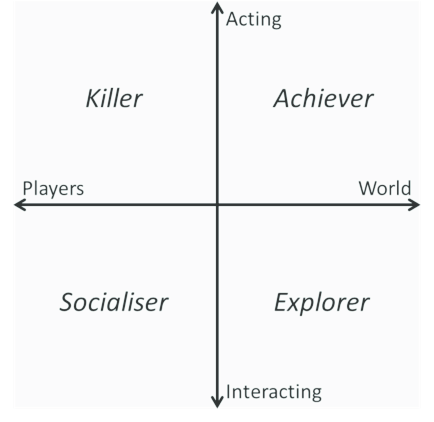 Mobile games have a tremendous opportunity to be successful, especially in the current fragmented media environment. Users crave the instant gratification each app offers — whether it is push notifications or a game score. In all of these cases, the social components of the game built unique experiences for users to share their victories with friends. Can games be entertaining and still empower people to empathy?

The potential success of mobile games must be balanced with the purpose of these new experiences. As augmented reality reaches scale with the consumer market, it is critical that companies take on the challenge of producing meaningful content for users to engage with in this new media space. Virtual experiences can be powerful tools for change: for example, in my Ph.D, I studied the effects of immersive experiences on empathy towards animals and natural ecosystems.

Current research suggests that virtual environments have a heightened capacity to inspire empathy via embodiment of novel avatars (virtual bodies that do not resemble the user’s physical body). For example, when people took on the identity of a piece of acidifying coral in virtual reality, they were more likely to show empathy towards the ecosystem after the experience. These findings indicate an opportunity for AR games to positively impact users and communities. Carefully crafted augmented reality games can bring people together and inspire empathy, kindness and understanding.

The technology is already being used to help improve expression recognition in autistic youth, and as a therapy tool for children with physical disabilities. In his TED talk, former NFL player turned cultural critic Chris Kluwe describes the future of AR as more than a tool for athletes or entertainers; it gives us the possibility to take on new perspectives and gain more empathy for those that are not like us. These explorations are only the beginning of what is possible with media rich AR experiences.

Social presence and immersion are the key to successful augmented reality games. Using the z-axis brings depth and greater immersion to each interaction between physical world elements and virtual objects. This also sets AR apart from its sister technology, VR. For example, the simple act of allowing ground plane detection can enable highly variable gameplay for users: no two games of AR basketball would ever be alike if the floor was always taken into consideration. With the right combination of computer vision features and game narrative, AR experiences will be irresistible to users seeking a new form of social interaction. These elements provide a unique opportunity to teach users empathy on a variety of issues, ranging from climate change to human rights.

There is no such thing as a digital life without consequence, and immersive mobile games are no exception. Creating AR social experiences that contribute positively to society is an ambitious goal and I hope more companies in the AR space take up the challenge.

Ketaki Shriram is co-founder of Krikey and holds a BA, MA and PhD from Stanford University’s Virtual Human Interaction Lab, and has worked at Google X on the Glass Team and at Oculus VR as a researcher.