Having previously revealed a prototype next-generation Rift headset called Half Dome, Facebook today revealed new prototypes called Half Dome 2 and Half Dome 3 at Oculus Connect 6. The goal in each version is to deliver a combination of wider field of view than current compact VR headsets, with variable focus that matches the human eye’s ability to shift between seeing detail in close and distant objects.

As revealed by Facebook Reality Lab chief scientist Michael Abrash and discussed further in a deep dive blog post, the new Half Domes are apparently being conceived as tools “for work,” empowering collaborative virtual workspaces. The company suggests that it will be building internal headsets around their technologies, and testing their viability within its own offices, before deploying them to the public. 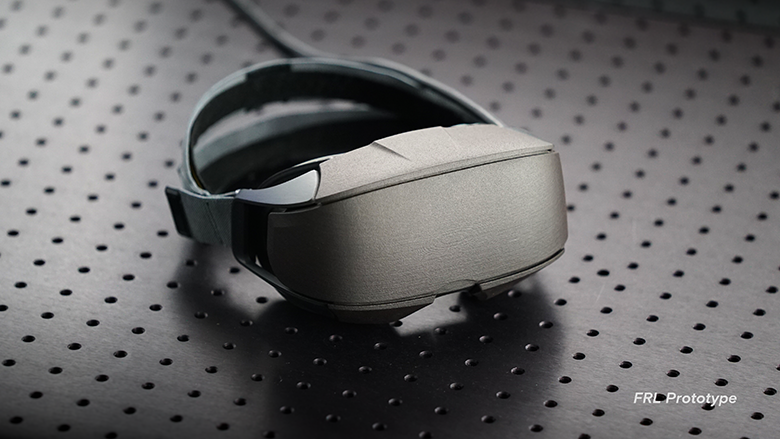 Above: Oculus’s Half Dome 3 prototype.

Half Dome 2 has a smaller motorized varifocal system based on voice coil actuators and flexure hinge arrays, while Half Dome 3 has a new electronic varifocal system — six liquid crystal lenses combined together, replacing the motorized focus mechanism with screens that can shift through 64 focal planes.

Each of the prototypes somewhat compromise the original Half Dome’s atypically wide 140-degree field of view but are dramatically smaller than before, making more comfortable varifocal headsets possible. Facebook says that Half Dome 2 delivers a 20% wider FOV than Oculus Quest, while reducing the weight by 200 grams compared with Half Dome 1. Since Quest’s FOV is approximately 90 degrees horizontal, that would bring Half Dome 2 to 108 degrees of horizontal FOV. 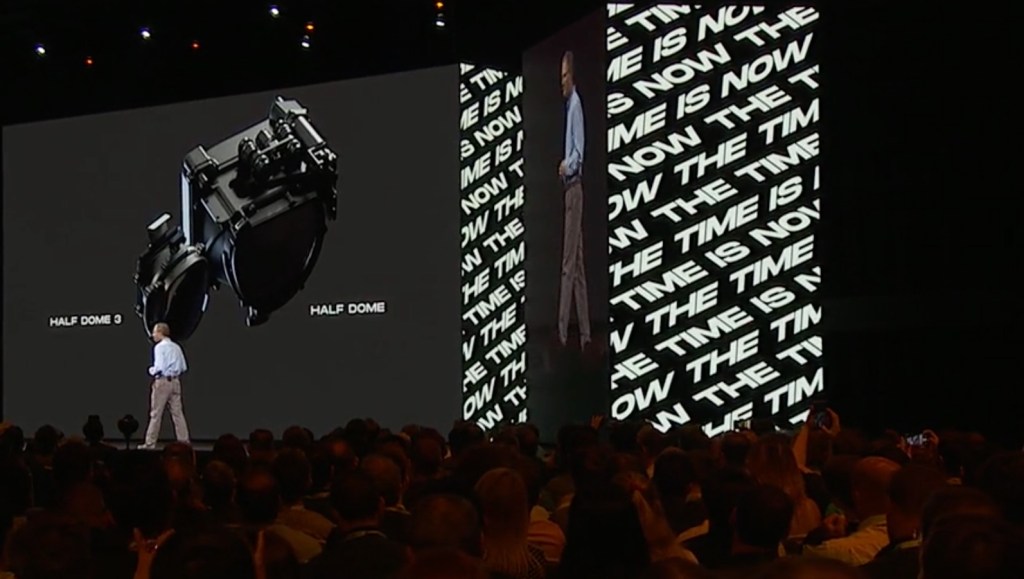 By contrast, Half Dome 3’s use of stacked, polarization-dependent lenses and switchable half-wave plates enables that prototype to achieve a size that looks like modern ski goggles, though no specific size, weight, or FOV specs were disclosed. As this is just a prototype, and “still very much research today,” the hardware’s size could shrink further before the company mass-manufactures units for its own testing.

It’s unclear whether either of these prototypes is likely to make it into the marketplace with Rift branding, or would instead become a higher enterprise-only tier of Oculus hardware. The original Half Dome prototype was once thought to represent the future of Rift hardware, but disagreements over the future direction of Rifts reportedly led Oculus cofounder Brendan Iribe to abruptly exit the company last year, followed by Rift team leader Nate Mitchell last month.

Instead, the iterative $400 Rift S launched earlier this year to somewhat tepid reviews. Many reviewers and users expressed disappointment that the platform was moving laterally compared with its predecessor rather than taking bold steps forward.

Instead of significantly boosting resolution, adding eye tracking, or adding wireless tethering hardware, any of which might have advanced the platform compared with competitors, Facebook augmented the Rift by adding inside-out tracking cameras and open-air speakers to reduce the need for separate tracking hardware and headphones. Similarly, a desire for greater universal comfort was offset by elimination of user-adjustable lenses, restricting its fit to only 70% of users’ faces, down from the first Rift’s 90%.

Oculus executives previously suggested that moving the Rift platform forward in a major, sequel-worthy way would require a quantum jump such as varifocal focusing, making the Half Dome prototypes particularly interesting. However, today’s announcement suggests that the technology’s release timeline may well have been lengthened, and wind up in testing rather than early adopter consumers’ hands throughout the next year.