Over the past several years, augmented reality headsets have struggled with an existential problem — they’re supposed to overlay digital information on reality, but so commonly look awkward that people don’t want to wear them in real public settings. Today, Lenovo is hoping to change that with ThinkReality A3, AR glasses that are compact and light enough to be worn in public venues such as retail and hospitality settings, but can also be used in labs, factories, and offices. While they’re not entirely fashionable, they’re inching closer to “normal.”

Lenovo signaled its work on ThinkReality A3 in November 2019, when it publicly showed AR Concept Glasses that we noted “won’t be confused with sunglasses” due to their larger frames and futuristic styling. By comparison, the final design looks closer to a pair of contemporary prescription glasses, apart from their lenses and nose bridge, which collectively hold three cameras. A3 comes in two versions: an Industrial Edition, designed for fully portable use with Lenovo’s Motorola-branded smartphones, and a PC Edition, compatible with Lenovo ThinkPad laptops and mobile workstations.

ThinkReality A3’s debut is significant for technical decision makers because Lenovo’s enterprise bona fides and established ThinkReality software/services platform offer a “safe” AR adoption solution for businesses of all sizes and types. As contrasted with smaller AR hardware companies, Lenovo produces not only mixed reality headsets but also the computing devices they depend upon for local processing and data, as well as the enterprise-class services that support the hardware. The company has been particularly aggressive in pioneering computers with next-generation technologies, including laptops with foldable screens and 5G networking capabilities.

When used with a PC, ThinkReality A3 enables fairly basic functionality: Office workers, engineers, and other desk-bound business users can access up to five virtual monitors filled with Windows applications. Lenovo expects that the glasses will offer enterprises heightened privacy, expanded productivity, and greater immersion — the latter particularly when used with architectural, engineering, and finance applications built with mixed reality hooks. Enterprise users working from home or in public will also be able to visualize data without unknowingly sharing it with observers.

Tethered to a smartphone, the Industrial Edition will compete against solutions such as Nreal Light and is intended to help enterprises deploy “mixed reality applications and content on a global scale, with global support.” In addition to enabling remote assistance — the display of a video window within the glasses while a remote expert sees what the wearer is seeing — ThinkReality A3 will enable real-time 3D visualization of digital objects for creatives, as well as guided data/imagery workflows for industrial technicians and other field operatives. Mobile AR apps will be backed by the ThinkReality software platform. 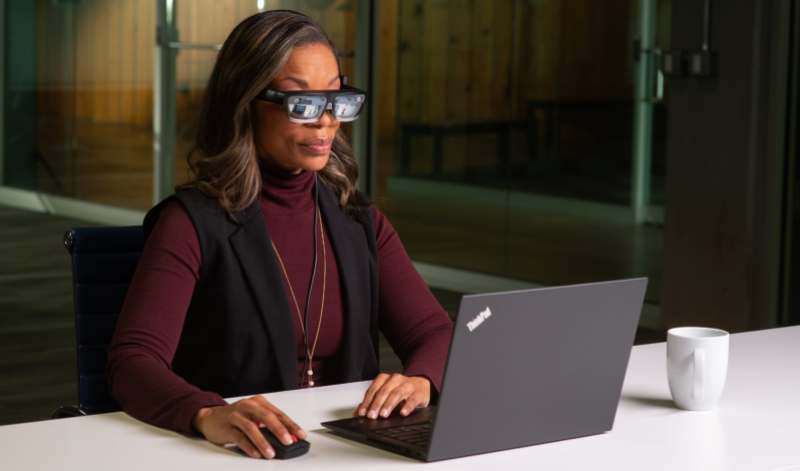 ThinkReality A3 works with Motorola smartphones made with Qualcomm Snapdragon 800-series chips and PCs built with Intel or AMD Ryzen processors. The glasses contain their own Snapdragon XR1 chipset, which powers stereoscopic 1080p displays, a central 1080p camera to share live video with remote experts, and a SLAM room-scale tracking system with left- and right-mounted fisheye cameras. They tether to phones or PCs with a USB-C cable and require DisplayPort capability for high-speed sharing of visual content.

Lenovo will begin selling ThinkReality A3 in mid-2021. Pricing details are not yet available.