Odeon Theatrical wants to built the future of the theater with augmented reality. The project is being unveiled today as a new way to draw audiences back into Broadway theaters and other venues using AR visuals.

The pilot program for digitally enhance live theatrical productions is being created by Sunchaser Entertainment, Hexagram, and the Shubert Organization. You can imagine how this could work: An actor playing Hamlet might see the ghost of his father, and if you pointed your smartphone camera toward the stage at that moment, you would see a ghost walking across it.

The goal is to create theatrical performances — viewed around the world — that blend AR or virtual reality experiences with live performances in Broadway venues. The project is targeted for completion by next year.

“When I can bring these two worlds together, as is now starting to happen, it’s incredible,” Stephanie Riggs, founder of creative consulting firm Sunchaser Entertainment, said in an interview with GamesBeat. “What we are trying to do as we move into the metaverse, as creators and developers, is view the theater as a digital venue, an augmented theatrical venue.”

She added, “It’s moving over into the digital realm, where we can transcend the limitations of physical venues. We can bring AR assets into the platform [and] into the venue. We can hook into show controls that preexist. And we can take that and place that in any location. It might be in a theater, it could be in Central Park, or it could be on a cruise ship.”

Devastated by the pandemic, Broadway theaters have just opened again, and they’re trying to lure audiences back into physical venues, which is an ongoing challenge with the spread of the Delta variant. By next year, however, things could be different and AR tech could attract a younger, more digitally savvy audience.

The visuals could include digital characters and immersive visual effects, and they could also be viewable via an array of technologies, including AR glasses (many still in development), smartphone screens, digital projection technologies, and other devices.

Odeon’s Augmented Theatrical Venue is a physical venue freed from real-world constraints, Riggs said. She said it will transform any location into a stage by seamlessly integrating traditional production elements such as light, sound, and sets with augmented reality content. The platform will work with a range of existing theatrical software and can run on multiple audience-facing hardware platforms, including mobile devices or head-mounted displays.

This allows original or revival productions to find new life in existing assets, as well as creating additional revenue streams within a COVID-19-compliant alternative venue. Once its build is complete, an Odeon show can be duplicated and installed anywhere in the world, with multiple shows performing concurrently. This reminds me of how Riot Games inserted a flying dragon into a stadium full of people during its 2018 League of Legends Championship finals. 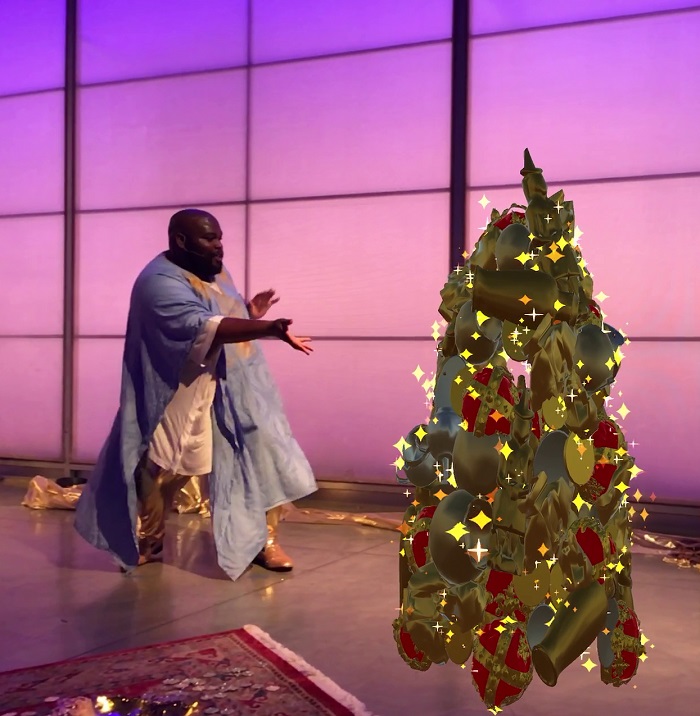 The group has a lot of expertise in both theater and AR. At Sunchaser, Riggs has worked for a couple of decades as a creator and consultant in storytelling and VR with clients such as Disney Imagineering, Google, and Refinery29. She has worked on projects that combine traditional storytelling and technology.

Founded by Rob Auten in 2012, Hexagram has developed immersive experiences spanning the physical and digital worlds, including one that involved Netflix’s Stranger Things and an installation that brought the fiction of an ice cream company in the show into the real world.  With the help of Saga, an in-house creative platform, Hexagram has developed interactive experiences for a global audience of millions.

And Shubert is providing backing, theatrical expertise, and access to talent. Shubert currently owns and operates seventeen Broadway theaters, six off-Broadway venues, and the Forrest Theatre in Philadelphia — as well as hundreds of other theaters.

Odeon’s Production Pilot Program has been launched to help existing productions explore the opportunities of the Augmented Theatrical Venue. Interested partners are being offered two tiers of service. The first tier is consulting, in which Odeon’s award-winning team works directly with the production to design an Odeon experience based on their intellectual property. The second tier focuses on development and expands on the consulting tier to build a comprehensive extended reality presentation that integrates with existing show control systems and includes optional ticketing and marketing support.

Big venues like the Hollywood Bowl have massive screens that could be used to project digital visuals that accompany a play, Shubert digital project director Kyle Wright said in an interview.

“When we think about audience building and what it means for Broadway to grow, it’s not so literal in the sense that everything we participate in or invest in or nurture has to happen on a Broadway stage,” Wright said. “[Instead, it’s a question of] how do we transform the worlds around these theaters that have these incredible storytelling worlds so that they start not when the lights go down but in Times Square?”

The team has a pilot program with multiple shows in the works.

“A lot of what we do is try to think about how we continue to improve upon the experiences and methods of storytelling on Broadway,” Wright said. “The metaverse and augmented reality is just another layer that we can add on to make storytelling more powerful. So what we consider to be our core competency is creating great stories that change people’s hearts and minds. And so my goal is always how do we make that better, more efficient, reach more people, and increase the quality and transformative effect of what we do?”

Riggs said there are challenges, especially if people don’t all have the same devices.

“How can we use those devices to make things more magical when they are viewing the live performance in that way?” she asked. “There are a lot of different applications. We’re excited to find how this can be applied across entertainment properties.”

There are 10 or so people working on the initial project. 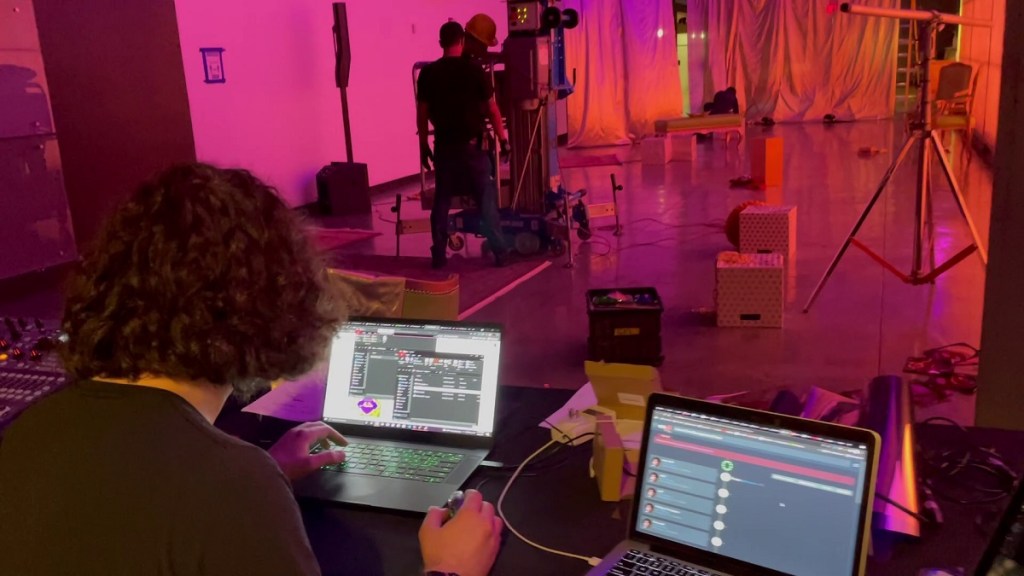 Above: Odeon tech fits seamlessly into existing live shows and their workflows.

Auten worked in animation and the game industry, and he started Hexagram a decade ago to move into immersive entertainment. The company expanded into cloud rendering and personalized AR content, and he is bringing that expertise to the project.

“We started to really think very broadly about what does it mean to be a person in a space, having an experience that’s mediated by technology?” Auten said. “When the opportunity came to work together with partners on the world live theater, especially given everything that’s happened over the past two years, we were really just pumped about the ability for us to take these incredible worlds that people have been working on for all this time and bring them outside and expose them to more people.”

This doesn’t mean they’re getting rid of traditional theaters or that everyone will have their smartphone out during a show.

“It can be incredibly addictive, and I think even comedic in many ways,” Wright said. “There really are these moments of little bits of magic that you don’t expect. And they blend in really seamlessly with the show.”

The tech should be good for shows with themes like magic or fantasy, but it all depends on the creators’ imagination.

“It’s authentic and very realistic for the performance. But one thing to keep in mind is with this particular partnership, what you see is the first professional attempt to bring the metaverse into Broadway,” Hexagram CEO Jamil Moledina said in an interview. “It’s not about bringing Broadway into the metaverse. The nuance here is enabling Broadway, and any particular existing medium, to shine [and] to allow it to continue to exude the magic that it has had for decades.”

As for restarting the theaters, that’s just beginning, Wright said.

“We’ve never restarted this battleship from scratch before,” he said. “It’s uncharted territory, but it seems to be going well.”