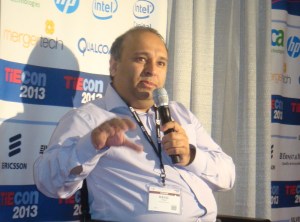 President Barack Obama is known for running one of the most tech-savvy political campaigns in the history of US politics. The chief scientist of the Obama campaign’s data analytics team, Rayid Ghani, shared some insights on how that campaign worked at the TiEcon 2013 conference Friday, an event aimed at entrepreneurs.

You’d think the team would have worked with huge amounts of data to come up with simulation models that would shape the outcome of an election, but Ghani said “it was the smallest dataset,” he’d ever used in a real problem.

The key data points were voter registration data – information that is publicly available – and data around people who supported Obama by either volunteering or making contributions to the campaign.

With a year and a half to put the data to work, Ghani didn’t have the luxury to recruit and train a team of engineers on a new technology, or for that matter “install, figure and implement a new technology.”

“We were heavily focused on open source, did a lot of coding ourselves, used a lot of databases, used Hadoop, R, Strata and worked with 20 different vendors,” said Ghani.

Based on experiments, the team came up with predictive models that became the basis of a $300 million TV ad-spend and five billion emails sent out by the Obama Campaign.

A machine learning graduate from Carnegie Melon, Ghani worked with Accenture for 10 years before joining the Obama for America campaign.

After helping to get the president re-elected, Ghani now works as chief data scientist at University of Chicago. He’ll be running a three-month summer program on “Data Science for Social Good” at the university for which he’s currently accepting applications from students across the country. Ghani is also working on a social good analytics startup called EdgeFlip.