Enterprise software-as-a-service (SaaS) adoption has never been higher — companies use 16 SaaS apps on average and 73 percent say nearly all of their apps will be SaaS by 2020, driving the global industry to an estimated $185.8 billion in the next year. But coinciding with this climb is a decline in app usage transparency. A recent survey of IT leaders conducted by Numerify found that 45 percent don’t have a complete picture of key apps and business health services, with 38 percent admitting they couldn’t analyze IT data on the fly and 57 percent saying they lacked an overview of IT performance across projects and employees.

The market’s relative opaqueness motivated Jody Shapiro, formerly head of product management for Google Analytics, to investigate a metrics-driven solution. Unable to find one, he developed his own in Productiv, which emerged from stealth this week with $8 million in series A funding led by Accel partner and former CEO of RelateIQ (now SalesforceIQ) Steve Loughlin.

“CIOs at Fortune 1000 companies tell us that they want to drive new business value from their software investments. Many of those companies spend tens or hundreds of millions annually on SaaS alone,” Shapiro told VentureBeat via email. “Those CIOs tell us that application engagement insights give an unprecedented view into SaaS application usage, and it’s helping them understand how those employees collaborate and drive their teams’ productivity.” 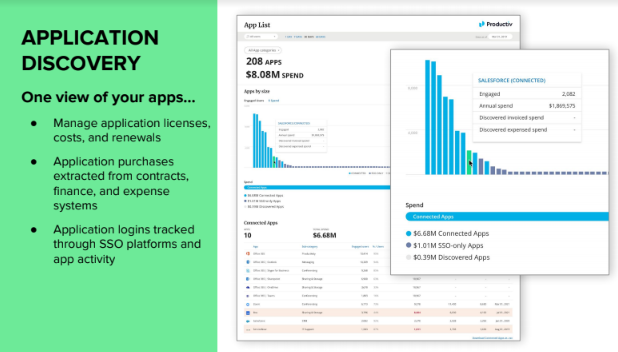 To that end, Productiv’s cloud-based dashboard integrates with single sign-on tools to track login activity and extract purchase and license data from contracts, finance, and expense reporting systems, offering an organization-wide view of agreements and expired software. Furthermore, it surfaces real-time usage and engagement statistics that can highlight redundant apps. Configurable rules and licenses enable admins to reclaim licenses automatically, and granular engagement logs — including charts that plot the number of engaged users, teams, and locations over time — make it easier to compare stats to industry benchmarks and to determine best practices that might boost productivity.

The endgame is to empower companies to make profit-boosting rightsizing decisions from app analytics, Shapiro says. Rather than just seeing that a division has, say, 300 Dropbox licenses and that 40 percent of team members uploaded files to Dropbox folders this past fiscal quarter, CIOs can drill down into the productivity impact of those licenses and estimate the potential cost savings of choosing not to renew them.

“[One] of our customers had thousands of employees using three different SaaS storage applications,” the Productiv team explains. “Different teams and locations had separately purchased Box, Dropbox, and SharePoint over the years. The company was paying for far more licenses than they needed …  [and] Productiv allowed [it] to understand which storage app to consolidate and standardize on, which … improved everyone’s ability to share and collaborate, reducing the time they spend working between applications, and increasing productivity.”