When you think sports, the first word that comes to mind is likely not “sensors,” but two startups are using sensors to make some of the coolest products in data-focused sports training we’ve seen.

At least that’s how InfoMotion Sports and Zepp Labs see it. The CEOs of the two startups spoke about the coming opportunities at VentureBeat’s DevBeat/Data Science Summit today.

A number of people in the industry, however, think digitized data analysis has no place in sports. Some believe that certain teams or individual athletes could get a competitive advantage using these types of products — particularly if other teams couldn’t afford them.

Zepp Labs chief executive Jason Fass pointed out on stage today that some coaches simply don’t want their players to have access to that kind of information:

“We flew down to Arizona to meet with the minor league giants, and the coaches said, ‘This data is going to confuse my athletes. I want my players to see ball hit ball. … I want the data for me.'”

Whatever side you’re on, however, it’s fair to say that data will help the sports world innovate. My coworker exclaimed in a debate about sports-data that his bike wouldn’t exist if Lance Armstrong hadn’t used science to improve his own equipment.

And, of course, your own skills will change as you start to understand just exactly why your swing sucks, why you can’t keep control of your dribble, or why you aren’t using the right club.

InfoMotion Sports Technologies created a basketball that is packed with nine sensors, a bluetooth device, and a battery, yet it still looks, feels, and plays like a regular ball. The company tested the ball with 25,000 athletes to determine how a “pro” plays. Then it lets you learn how to play like them.

“We can start to learn what you’re doing and start feeding back to you little tips and video. … That will be the future of sports,” said chief executive Mike Crowley, “We take this concept of micro-big-data: connect with a single person, and then expand that into the world.”

The ball collects 6,000 data points a second while connecting to an app on your smartphone from which you can do a variety of practice tests, get tips, and train to play like the pros. A voice on the app will coach you, telling you whether you’re doing a good job or need to improve, all the while saving information about you that will be used to help the sports world understand why our muscles move the way they do and why the equipment responds to our muscles the way it does.

He went on to say that the growth potential is endless with a device like InfoMotion’s. He even sees potential to change sports-based video games.

“We have taken the digital world and the physical world and combined them in a new way that doesn’t require you to be in front of the television,” said Crowley.

He explained that, one day, you could have a game where you’re literally playing against your favorite digital players.

The ball costs $300, not exactly a cheap toy, but Crowley says they tried very hard to create a value proposition that would be worth it to those who want to learn about their own skills and game. 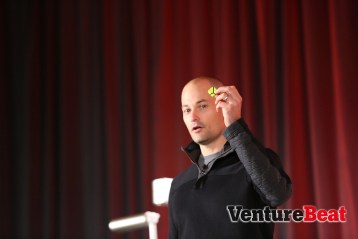 Zepp Labs has created a small sensor puck that you can attach to your “swinging” equipment: a tennis racket, golf club, or baseball bat. The company tried to model itself after Go-Pro, the athletic camera that can change its purpose based on the attachment, or mount, it’s on.

The Zepp sensor, which costs $149, can connect to the three pieces of equipment through different mounts, but only one sensor is needed. It then connects to an app, on which multiple accounts can be created. If you want to see how well your whole family plays in their various lessons, you can simply snap the sensor on and check into their account.

It will store information about the materials used in and the size of your piece of equipment in order to get a fuller picture about you. In action, it can actually build a 3D picture of your swing, viewable on the app within .7 seconds of the swing.

For example, you tell the Zepp sensor that you’re using a baseball bat. Once you swing, the app will show you a 360-view as well as a top-down view of your swing, data on how fast it was, where the ball made contact, and more.

“It shows pictures of consistency or inconsistency. … It’s very hard to relay that with words.” said Michael Aicardi, founder of the San Francisco Baseball Academy. With pictures, it’s much easier.”

The device gets much “bigger picture” when you realize that Zepp has already stored data on 3 million golf swings, including the kind of club, shaft material, and length.

“If you’re a product manager at Titleist, this is amazingly actionable data,” said CEO Fass.

However controversial, if you have any athletes — or wannabe athletes — who are into the quantified self, these might make great presents to stick under the tree.