YouMail, a startup that promises to help you screen creeper-calls, announced Thursday that it has answered over one billion phone calls, with 500 million of those calls occurring since September 2010. The company has also received an undisclosed round of funding, which brings the total raised to date to $12.5M.

YouMail estimates that over 50 million people have interacted with a YouMail user and reached 15 million unique callers per month last October. To check who called you, you don’t have to dial your voicemail, enter a passcode, listen to a lady describe when the message was left and finally hear your message. The app provides the who, where and what all for free. 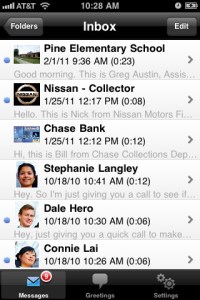 YouMail plans to use the funding to expand its mobile offerings as well as its flagship service, the Visual Voicemail platform. Visual voicemail lets you see who has called and left a message as well as read a free computer-translated version of the message with voice-to-text. Oftentimes these messages are entertaining, but if you don’t want “BART card” to turn into “fart card”, you can sign up for a paid human translation service.

“Our call volume and the increasing number of third-party messaging applications demonstrate that YouMail is a proven communications-as-a-service platform unique in its ability to scale, to support ‘freemium’ economics, and to support agile mobile app development,” said YouMail chief executive, Alex Quilici.

The funding is probably in the $4-5 million range. Current round included, YouMail has raised four significant funding rounds. These include a $1.9M angel round from Tech Coast Angels, $4.75M first round led by VantagePoint Venture Partners, and $1.5M in debt funding. An extra $410K filed with the SEC, leaves roughly $3.9 to count for today’s announced round.

Tech Coast Angels and VantagePoint Venture Partners both participated in the current round.

We’ll be exploring the most disruptive mobile trends at our fourth annual MobileBeat 2011 conference, on July 12-13 at the Palace Hotel in San Francisco. It will focus on the rise of 4G and how it delivers the promise of true mobile computing. We’re also accepting entries for our mobile startup competition at the show. MobileBeat is co-located with our GamesBeat 2011 conference this year. To register, click on this link