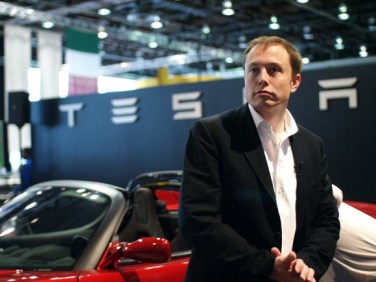 The electric car maker just raised the bar on its IPO, slated for tomorrow, increasing the number of shares for sale from 11.1 million to 13.3 million. Shares are expected to price between $14 and $16, with the company’s valuation hovering around $1.5 billion.

The word on the street is that the stock is hot. Bankers and analysts alike are seeing a spike in retail investor interest, inspired mostly by hype and the objective sexiness of the vehicles themselves — both the $109,000 Roadster and the forthcoming $45,000 Model S sedan.

But even if Tesla has a blockbuster day tomorrow, there’s little guarantee that share prices will stay high. In fact, cleantech market trends all but dictate it won’t, and there are still towering hurdles standing between the company today and mass commercial success — hurdles it will have to leap in order to keep its shareholders happy.

So heads up, future investors: here are 10 of the most burning questions about the company and what it needs to do.

1. How will Tesla keep shareholders happy when its next product isn’t due out for two years?
Right now, Tesla is betting the farm on its all-electric sedan, the Model S. Problem is, it’s not due out until 2012, and if the delays the company experienced developing its Roadster (now on the market) are any indication, that deadline may get pushed back even further. In the meantime, the Roadster isn’t exactly carrying the operation. A little over 1,000 units have sold since its launch last year, and apparently only 10 cars are being sold every week at this point. How do you keep people excited about a company that’s basically pressing the pause button at the peak of its fame?

2. When will the company stop losing so much money?
Tesla has been around for seven years now, and it’s developed a couple of different revenue streams. In addition to its Roadster sales, it is also supplying battery packs to one of its major stakeholders, Daimler, to use in its electric models. You would think that losses would be shrinking, but this isn’t the case. In fact, they swelled from $16 million in Q1 of last year to $29.5 million in Q1 of this year. Now Tesla needs to shell out to get the NUMMI automotive plant — bought for $42 million — up and running, and to hire hundreds to thousands of new employees. Cutting losses doesn’t seem to be on the agenda.

3. How is Tesla going to repay the government?
Tesla earned its stripes as the most promising electric vehicle company when it landed its $465 million loan guarantee from the U.S. Department of Energy under the banner of its Advanced Technology Vehicles Manufacturing program. This propelled it into the ranks of Ford and Nissan, which also won loans in that round, beating General Motors and Fisker Automotive. The loan is intended to cover 80 percent of Tesla’s new manufacturing operations, including NUMMI. The question is, how and when will the company be able to repay this loan?

4. How far will the company’s deal with Toyota go?
When the partnership between Tesla and the major Japanese automaker was first announced in May, the fanfare made it seem like they had a binding deal to create a new line of electric cars together. CEOs Elon Musk and Akio Toyoda stood next to each other and explained how Tesla would provide electric drive trains to bodies built by Toyota. But a week later, it came out that this part of the deal between the two companies — which also includes Toyota’s commitment to take a $50 million stake in Tesla after its IPO — was not so set in stone. In fact, some analysts believe that Toyota never had the intention to build a car with Tesla, that it just needed a nice green boost in its public image following its recall woes. But if the tandem car deal falls apart, how will Tesla, which only plans to build 20,000 Model S sedans at the NUMMI plant a year, take advantage of the facility’s capacity to churn out 500,000 cars a year?

5. What about its relationship with Daimler?
Daimler, the German auto maker known for its ownership of Mercedes-Benz, acquired a 10 percent stake in Tesla last May. The same deal gave Tesla access to Daimler’s commercial-scale production line technology. Before then, however, the two companies signed a contract for Tesla to provide 1,000 lithium-ion battery packs and chargers for Daimler’s Smart electric vehicles. Daimler has since sold 40 percent of its holdings in the company to Abu Dhabi-based firm Aabar investments. But Daimler will still be the second largest shareholder behind Musk after the IPO, with 8 percent of shares. The question is, how will its relationship with Tesla change now that Toyota is entering the picture? Will it hold onto its shares?

6. Will Tesla be able to rely on ZEV credits for added profits?
Under California’s Zero Emissions Vehicles Mandate, major car manufacturers must build a certain percentage of zero emission vehicles. This percentage is going to go up every two years. If companies cannot hit their targets, as none of them have in the past, they can buy credits from companies that are building zero-emission vehicles. Tesla has capitalized on this big time, selling credits to the likes of Honda and others. But now that all major automakers, like Nissan, Ford, GM and Mitsubishi, are coming out with their own plug-in vehicles, will there be enough demand for these credits? We hear Tesla is depending on selling every credit it is able to produce, but that’s looking increasingly unlikely — especially considering that it will have more competition in this area from companies like Fisker and Coda Automotive.

7. Will Tesla be able to hit its target of 20,000 Model S sedans?
As mentioned, Tesla’s long-term success seems to hinge on its ability to sell 20,000 units of the Model S when it comes out in 2012. None of the other cars it’s discussed theoretically, including the cabriolet, van and SUV it introduced during last week’s investor roadshow, are close to reality. If they happen, they will happen in 2014 or 2015. The problem is, Tesla only has about 50 retail locations worldwide, and those are the only locations where the cars are actually being sold. Yes, there are extensive plans to open up more showrooms, but again, where’s that money going to come from?

8. How will the Model S compete against the Chevrolet Volt and Nissan Leaf?
Tesla has captured the public’s interest for sure, but two other green cars have done a good job of generating buzz: General Motors’ Chevy Volt and Nissan’s all-electric Leaf. Both of these cars are coming out before the end of 2010. They are both made by major automakers who have the manufacturing capacity and capital to support their long-term development and sales. And both are priced for average consumers. The Leaf, in fact, could cost below $20,000 in California after government rebates. This makes it competitive with regular cars on the road, not just the plug-in hybrid and electric models. How is Tesla supposed to compete with them when it’s trailing behind by two years and plans to sell the Model S for nearly $20,000 more?

9. Will Elon Musk be able to retain control?
As almost every article on Tesla notes, it is led by quite the colorful CEO. A co-founder of PayPal, Elon Musk has set off to build things that most little boys only dream of: electric cars and rocket ships. That’s right, his is also currently CEO of Space X, one of the private companies pursuing manned spaceflight. How can he divide his attention between these two complex ventures? On top of that, he is notoriously detail oriented in his leadership strategy, leading to delays and disagreements with former colleagues, investors and others. Attempts have actually been made to dilute his controlling interest in the company to no avail. Now he has a messy divorce and a personal financial crisis to deal with (albeit one that might be alleviated by the IPO). Will he be able to maintain control of Tesla given his increasing interest in Space X? Would Tesla command the same attention if he was not at the helm? More importantly, will shareholders accept the fact that Daimler gets to pick the company’s next CEO, according to its S-1?

10. What will Tesla’s first public earnings call sound like at the end of Q2?
Recent reports have pointed out that Tesla isn’t doing so hot when it comes to sales. It has all these ambitious plans to build a new line of four Model S-based cars, but the reality is that it’s selling about ten of its luxury Roadsters a week. On top of that, and widening losses, and no surefire plans for future profit, what is Musk going to tell his new shareholders during the company’s first earnings call as a public company? It might not be a pretty picture — one of the reasons Tesla seemed to be rushing the public sale out the door. The company will face an unprecedented level of transparency and public scrutiny. One more reason why the IPO might be a loud pop followed by a fast fizzle.