A couple of weeks ago, Google announced Google Photos, a web and mobile app for storing an unlimited amount of photos and videos for free.

Trying to figure out if you should start using Google Photos? I know many people who have been trying to make up their minds about whether to adopt it.

I’ve been using the app nearly every day since it became available.

Here are a few good reasons to seriously consider signing up for Google Photos — and perhaps even switching over from Apple’s iCloud, Dropbox’s Carousel, Yahoo’s Flickr, Microsoft’s OneDrive, or some other cloud service for syncing and sharing photos. Above: Some photos I took recently.

With Google Photos, you don’t have to worry about approaching or surpassing a limit like 10GB or 20GB or even 1TB. Throw as many photos into it as you want — so long as you’re OK with Google compressing your photos. (Photos larger than 16 megapixels and videos with resolution in excess of 1080p will be compressed.)

Google Photos can store your photos as is, with no compression, but photos you upload that way will count against your quota of storage across multiple Google apps, including Gmail. I suspect that many people will be willing to accept the compression in order to get unlimited storage with Google Photos. Simply put, free is tempting.

2) Compression of your photos and videos isn’t hugely obvious to the human eye. Above: Photos are compressed, but you probably won’t notice.

Taking the free and unlimited route means all of your photos and videos will be compressed, but reports in the past few weeks suggest that images don’t look that different once you’ve uploaded them to Google Photos.

With the exception of professional photographers and videographers and people using retina displays, the compressed resolution of your photos shouldn’t be much of an issue.

3) It produces “stories,” panoramas, animated GIFs, and stylized versions of your photos without requiring you to do anything. Above: The story Google Photos made of a trip I took to LinkedIn headquarters a few months ago.

In one weekend, Google Photos automatically a) stylized a photo of mine to make it look cool, b) generated animated GIFs that actually weren’t all the bad, c) stitched together several pictures to make a neat panorama, and d) generated “stories” with pictures, locations, and businesses that I visited.

The stories were the most valuable. I added descriptions for photos and modified locations Google automatically affixed to certain photos and then showed a couple of the stories to a few friends, with special shareable links. (You can also share them on social networks.)

But the stylized photos, the panoramas and the animated GIFs all made me feel like an accomplished, prolific photographer, even though I’m really just an amateur. These automatically generated products made me want to log on to the desktop app or engage with the mobile app more — and do more with my photos.

4) Search for things in your photos, thanks to image recognition powered by Google’s cutting-edge artificial intelligence. Above: A search for “water.”

Long before Google became a powerhouse in email, mobile devices, and document creation, it was a game-changing search engine. So perhaps it’s not surprising that the search feature in Google Photos makes the service revolutionary, relative to most other photos apps out there.

Google Photos lets you type in anything to its search box and then bring up photos that contain what you search for. Search results of photos taken over a span of many years is truly impressive. It’s not something that’s common for many photo-syncing apps.

Google is making all of this possible through a type of artificial intelligence called deep learning. The method involves training systems called artificial neural networks on great quantities of data, like images, and then giving them a new piece of data, such as a new image, to receive an inference about it in response.

Google Photos is the first big Google application to employ a powerful 22-layer neural network Google developed last year, called Inception, according to a report from Medium’s Backchannel. All of those layers mean that Google Photos can handle very specific queries.

5) Find all the pictures you have of yourself, or someone else. 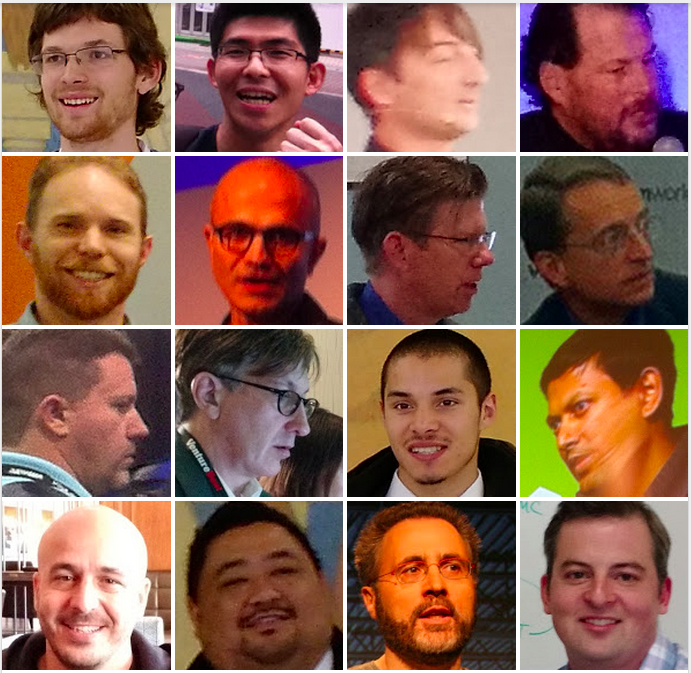 Above: Faces Google Photos pulled out of my photos.

Google’s deep-learning capabilities also extend to face recognition. In Google Photos, you can see photos of people across several years. The feature makes it far easier to find the best photos of a given person. It can even pick up on the presence of people in photos that you never noticed.

6) Filter, crop, and pop your way to photo-editing glory. 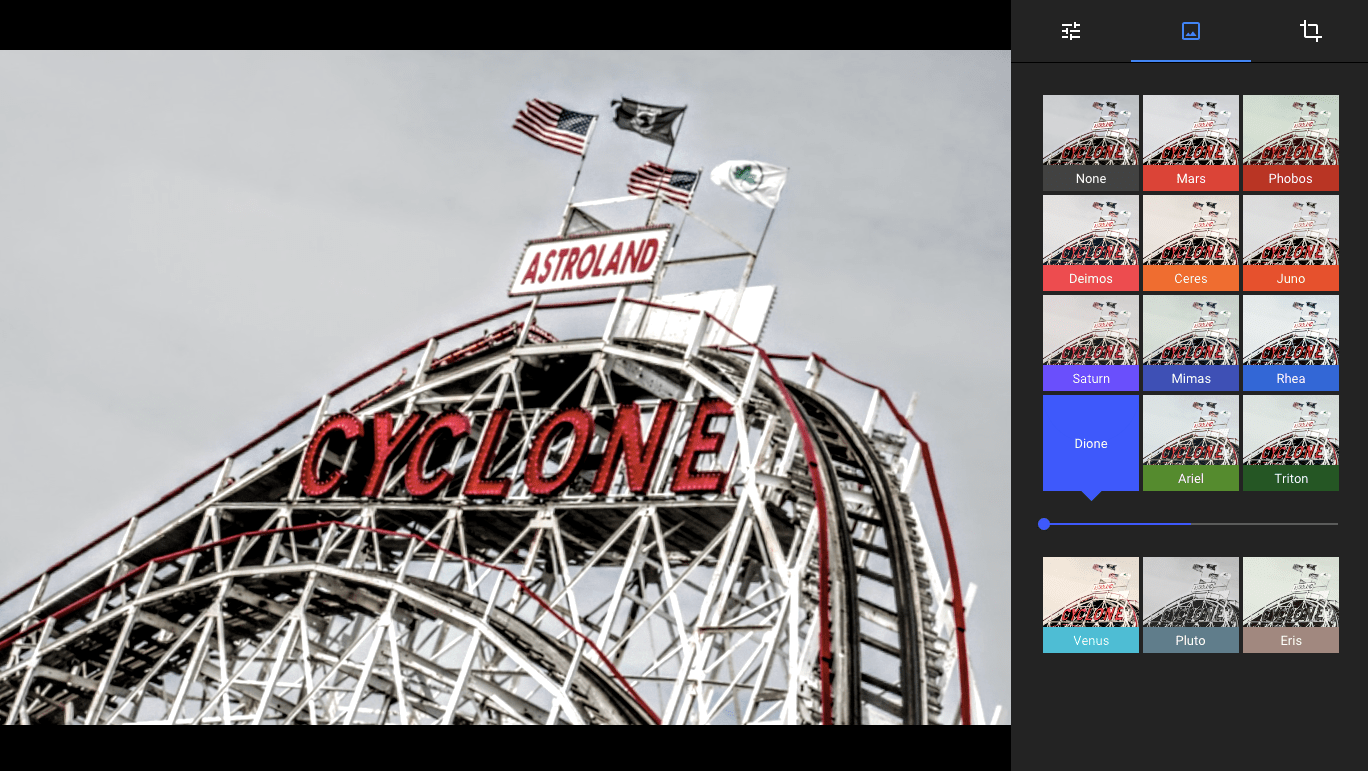 Above: The Cyclone looks way cooler here than it did in my original photo from 2004.

Yes, Google Photos comes with a variety of tools to edit your photos. It’s not a huge leap forward from the Google+ photo-editing features, but it’s nice to have as part of the overall Google Photos application.

While I personally don’t like to play around with filters or vignettes, I do appreciate the ability to rotate images using a grid that appears to line everything up just right.

7) Uploading and grouping up pictures and videos and sharing them across devices is done automatically. 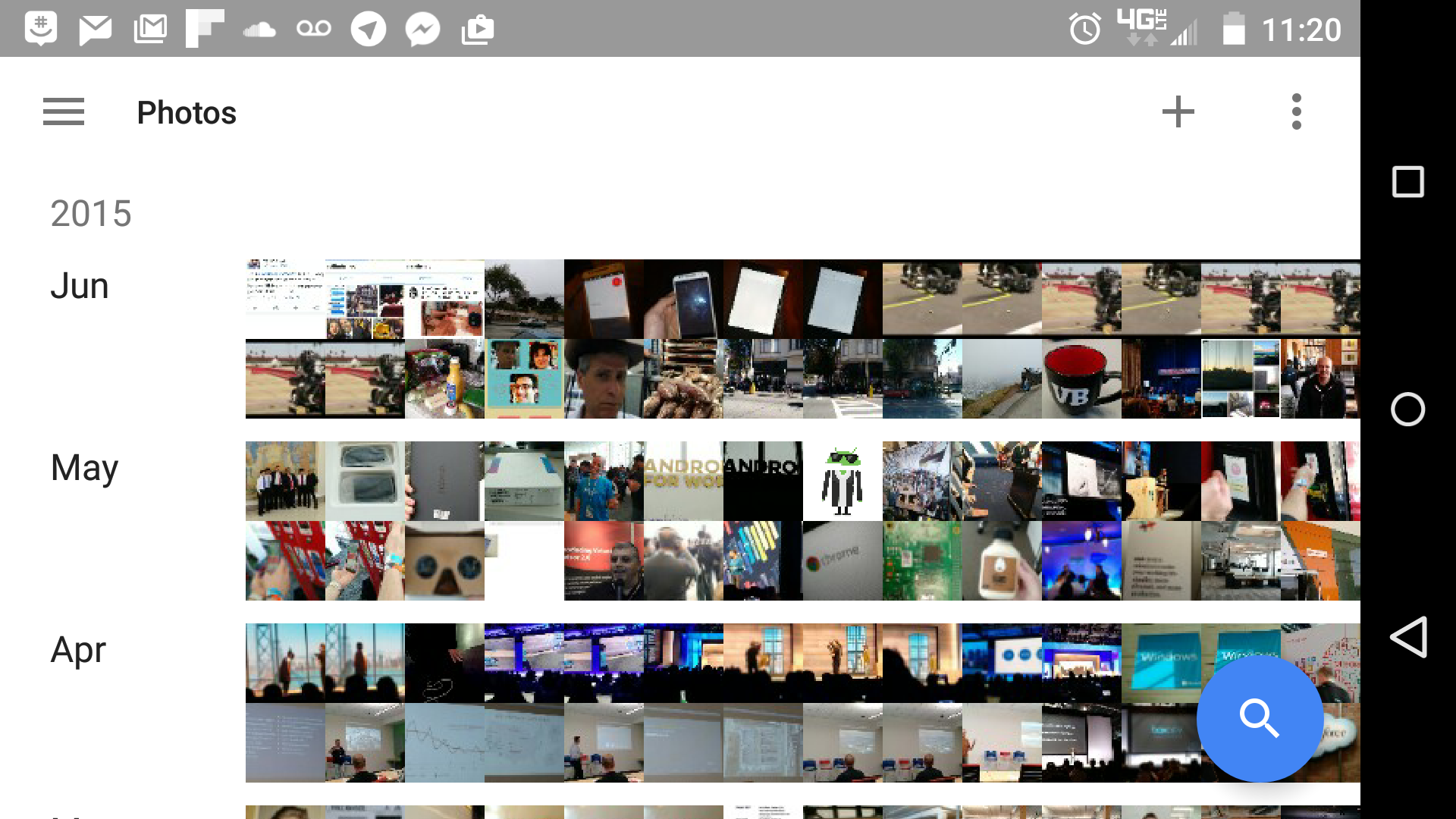 Above: Google Photos on my phone.

Other photo apps do this, too, but I never used any of them. All the perks of Google Photos made me want to try it out, and now I enjoy this low-level benefit. Now I don’t have to take the time to email photos and videos to myself, which I did for years. This has already proven handy in my job, but it’s also helpful for picture-taking in my free time.

Generally speaking, knowing that my pictures will by synced and sometimes stylized right away has convinced me to err on the side of taking a picture than not.

8) Moving photos from Google Drive to Google Photos is a snap. Above: Old pictures I threw in Google Drive come alive in Google Photos.

I didn’t discover the “Show Google Drive photos & videos in your Photos library” option in the Google Photos settings until two weeks after I started using it, but oh — once I did, it was great.

Photos show up immediately. While the image and face recognition systems go to work, you can scroll through your old photos stored on Google Drive and relive all of those old memories.

The bigger significance of this is that for the first time, all of my photos from multiple cameras and mobile devices are now stored in one central place.

9) It can free up precious storage on your mobile devices. Above: All those Nexus 9 photos take up space.

When you start the Google Photos app, at least on iPhone, it tells you in a card in the Assistant section that the app “can even help you organize your photos and free up device storage.” And when storage on a device is running low, a card tells you that and gives you the opportunity to free up space by deleting local copies of photos and videos.

When you have just a few gigabytes locally on a phone, tablet, or even laptop, that matters a lot.

10) As a major Google app, Google Photos will get better and better. Above: The photos for this article. Whoa, a little meta.

Google executives made a big deal about Google Photos when it launched the service last month at its I/O developer conference. The company even gave out glossy books showing its many features. With such a high-profile launch, Google probably won’t be suspending development of Google Photos anytime soon.

The service is not perfect. The face matching and image recognition are surprisingly good, but they do make mistakes. It thought one of my pictures of chicken contained a fish, for example.

The underlying technologies will likely improve over time, leading to better photo and video search. Finding evidence of the improvement should be amusing and satisfying.