We spent hours combing the floor of the Consumer Electronics Show in Las Vegas to sleuth out the most compelling tech trends and the most exciting new products of the coming year.

Now that we’ve returned from Vegas, pounded enough Emergen-C cocktails to get us back into a semblance of health, and compared notes, we’ve settled on this list of the show’s top products.

Read on to see the most promising hardware that will be hitting store shelves in the coming months. 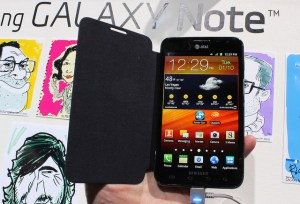 Less a technological breakthrough than a form-factor experiment, the Galaxy Note is notable primarily because, well, it actually works.

Up to now, phone and tablet manufacturers have been careful to separate their lines: Phones have 4-inch screens or smaller, while tablets have 7-inch screens or larger. The embarrassing failure of Dell’s 5-inch Streak confirmed the wisdom of that approach.

But in truth, there’s little difference between a tablet and a smartphone, other than size, and for those of us who habitually use 3×5 cards or similar-sized pocket notebooks, a 5-inch diagonal screen is actually just about perfect for holding in one hand while jotting notes with the other. By adding a stylus and some note-taking and handwriting recognition software to the Android OS, that’s exactly the use that Samsung has in mind for the Galaxy Note.

And yes, it’s too big for a pants pocket. It might be more attractive to female customers, who can stash it in a purse, or to more stylishly dressed men, who could put it in a jacket pocket. We spent some time with the Note on the CES show floor and came away favorably impressed.

One downside: It’s running a sadly outdated version of Android (2.3, aka Gingerbread).

It will be coming to AT&T Wireless later this year, and should be a strong contender of AT&T and Samsung give it a decent price and find the right audience for their marketing message, which is basically that writing and drawing are still fun. –Dylan Tweney 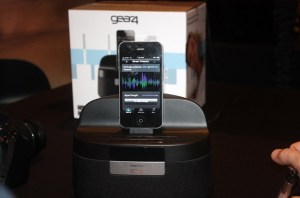 If you sometimes wake up feeling drained, the Gear4 Sleep Clock may help you. The clock uses an iPhone app, a dock and Doppler radar to sense your sleep pattern and wake you up at the lightest point in your sleep cycle.

The radar senses your movements and determines exactly when you fall asleep. It also senses if you wake up during the night and detects your breathing so that it can figure out if you are in a deep sleep or not. When you wake up the next day, you can see the results on your iPhone app. It will tell you exactly how many hours and minutes you slept. And it will say how long it took to fall asleep and how many times you woke up. After you use it for a while, it will come up with averages and recommendations so you can get better sleep. You don’t have to wear anything on your wrist, as you do with rival solutions from Basis Science or Jawbone. The Gear4 device will go on sale soon for $199. –Dean Takahashi

The distinctive feature of this Ultrabook is its cover. It is made out of black Gorilla Glass, a damage-resistant glass from Corning that is normally used for screens. It certainly makes this laptop design stand out amid a sea of Ultrabooks at CES. The machine carries the Envy brand established by Voodoo PC, which HP acquired. It has a high-definition HP Radiance display (1600 x 900) with 300 Nits of brightness. It has nine hours of battery life and a row of connection slots. It also has an HD webcam and HP’s Beats Audio technology. The Spectre also has an analogy roller control for changing the sound volume and it has a mute button on the side for when you have to stop the music fast. It comes with 128 gigabytes of flash memory and Intel’s Rapid Start technology. The height is 20 millimeters and it weighs 3.79 pounds. It will cost $1,399 and will start selling on Feb. 8. –Dean Takahashi 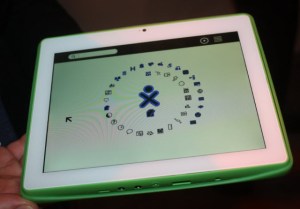 This tablet has been in the works for a long time and its true cost remains to be seen. But One Laptop per Child has done a good job of researching what children in developing countries need and then tailoring it for them. It’s not just an iPad with a different label slapped on it. It has a dust and waterproof cover. It has its own Linux operating system (and it can also run Android) and its Sugar user interface has been adapted for touchscreen use. You can charge it with a wall outlet, a solar panel, or a hand crank. And the screws for the cover line up as power pins when you are getting power from the solar panel. And it has an eight-inch display that works inside or outside in bright sunlight. That’s a lot of innovation in a small tablet whose target cost is around the $100 mark. Overall, the OLPC XO 3.0 has an appealing design that promises to reach a wider market than previous OLPC XO laptops. –Dean Takahashi