Dell showed up late to the Ultrabook party, but it has a cool design that has been in the works for more than two years. The laptop has a 13.3-inch screen, but its footprint is small because the glass goes straight to the edge of the laptop. It’s also light at 2.99 pounds and is only 6 millimeters thick at its thinnest and 18 millimeters at its thickest. It is lighter in part because Dell used a carbon fiber base for the machine. The palm rest is also made of carbon fiber, so it doesn’t feel like cold metal. The “warm steel” color could be more vibrant, but you don’t have to spend all of your time shining it get rid of the palm grease, thanks again to the carbon fiber. It uses Intel processors and integrated Intel graphics. The display has Gorilla Glass for durability. The battery life is about nine hours and it has a full range of ports and 128 to 256 gigabytes of flash memory. The machine costs under $1,000 and will ship in February. –Dean Takahashi 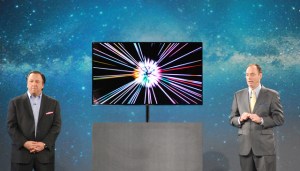 There’s no doubt that OLED (organic light-emitting diode) displays are the next big step for HDTVs beyond LCD and plasma displays, the only question is when they’ll finally be available. This year we saw some of the first large-screen OLED HDTVs from LG and Samsung, and they’re so eye-bleedingly gorgeous that they may make you drop-kick your current set to justify an upgrade (first-world problems, we know).

Both LG and Samsung had 55-inch OLED models at the show, though pricing and actual release dates were nowhere to be found. The sets are expected to be released some time this year, and expect them to cost a mighty premium compared to similarly sized LCD HDTVs.

But for those that can afford it, they’re in for a treat. Since the OLED displays don’t require a backlight, they’re impossibly thin (LG’s display is only 4 millimeters deep with a 1mm bezel). They’re also capable of a richer color palette, dark-as-night blacks, and brightness beyond the capabilities of LCD sets. OLED also features fast response times (it doesn’t have the fast motion issues that LCD does), as well as extremely wide viewing angles.

OLEDs also offer a nice green benefit: they draw much less power than any other type of HDTV. That alone could save you hundreds every year in electricity bills.  –Devindra Hardawar 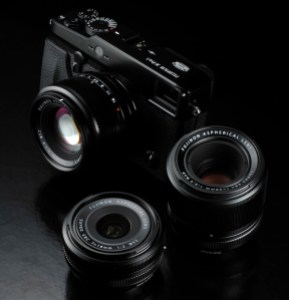 Every year, CES sees a slew of mostly forgettable camera announcements. This year, Fujifilm blew us away with a camera whose capabilities and styling are both amazing.

Capitalizing on the hipsterish and cameraphile preference for retro-styled cameras, the X-Pro1 looks a bit Leica-like, and that’s one of its big attractions. Everyone likes to hold a camera that looks, well, serious and artsy.

The camera also give photographers easy access to more creative controls: Like the Canon S100 and the Olympus Digital PEN, it’s a point-and-shoot with dials to provide quick access to settings, like shutter speed and exposure control, that can help elevate your photos out of the category of mere snapshots.

Also extremely promising is the set of interchangeable lenses that come with this camera, including a 35mm lens with a really fast, F1.4 aperture (almost unheard-of in low-cost lenses for digital cameras), a 60mm F2.4 and an 18mm F2.

We haven’t got our hands on this camera yet, so check out DPReview’s first look for an in-depth overview. It will ship in February, and will probably cost way too much, but we want one. –Dylan Tweney